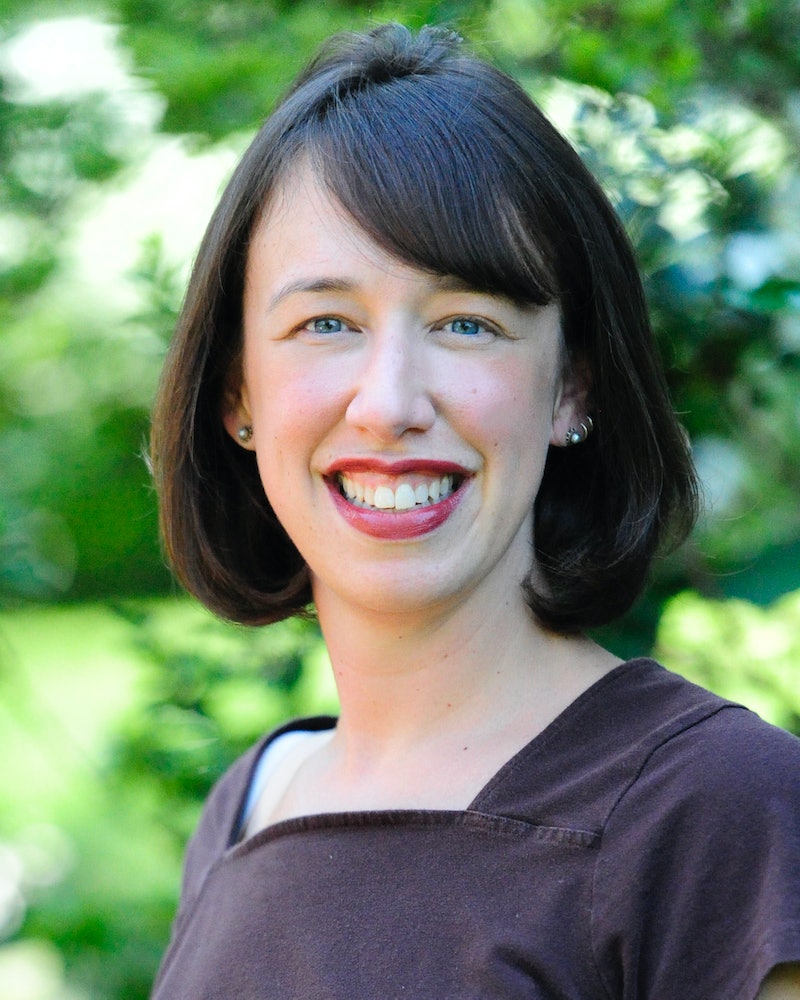 We saw major waves travel through the YA landscape this year from Jennifer Mathieu's debut novel, The Truth About Alice . This raw story told the realistic, emotional tale of a high school girl who falls victim to severe bullying. And while it may seem that Mathieu's follow-up novel, Devoted, coming next summer, is going down an entirely new road, she's included many more similarities than you may think.

Devoted centers on Rachel, a young girl who's growing up in the Quiverfull Movement. (Ever heard of 19 Kids and Counting ? It's that.) But an evangelical, conservative Protestant sect may not be where Rachel wants to spend the rest of her life, so she has to make some big choices about identity, religion, and what she wants for her own life. And you have to wonder, how can you leave something you know for something that is entirely foreign, and even have been told is bad.

I had the opportunity to not only talk with Mathieu about her inspiration and her research with actual women who left the Quiverfell Movement. But even more exciting? We have the world's first-ever look at the cover of her new book Devoted. And, you guys — it's stunning.

But first, here's what Mathieu has to say about Devoted, and what she hopes readers will feel when they get a chance to read it.

BUSTLE: What was your inspiration for writing Devoted?

JENNIFER MATHIEU: The Truth About Alice is such a high school book, and this is different because this girl is an outsider to that whole world The link you could make is that it's still about being young, being a teenager, and trying to — what I think all good young adult literature is about — trying to find your place in the world. And Rachel is not part of that secular, typical high school world, but she's still dealing with a lot of the same struggles and identity crisis issues.

I've always been fascinated by extremes in religion and by cults, by what drives people to extreme versions of faith. I've done a lot of reading, both fiction and nonfiction, about people who have been involved in religious communities that are super intense and require a huge amount of commitment. And the other part of it was this show 19 Kids and Counting....

Rachel is not part of that secular, typical high school world, but she's still dealing with a lot of the same struggles and identity crisis issues.

When I started learning more about this movement ... I just became utterly fascinated by it, wondering how and why people choose lives like this. In addition to having many, many children, they believe that women should wear long skirts, women should not cut their hair. They don't send their children to school. They try to be closed off to the secular world... I wanted to know what it would be like to be an older girl in this world. A lot of older girls in this world become really burdened with childcare. So what would it feel like to be one of these girls and feel inside, I want something more.

How did you go about doing research into the movement?

I got in touch with Kathryn Joyce, who wrote a nonfiction book called Quiverfull. She put me in touch with two young women who were a part of the Quiverfull Movement and left, who I met in person. One of those women I've become very close to as a friend, and I'm dedicating the book to her. ... I also read a lot of blogs, including one under the name No Longer Quivering by Vyckie Garrison, who has a ton of things from women who grew up in this world. I've spent countless hours reading these blogs by women and girls who've left this movement, or who are still a part of this world.

What are you hoping readers get out of your story, without spoiling?

I want to be really clear: I never would want someone to think I'm bashing religion. What I think it's about is just an extreme version of something all people go through. To wonder about, what do I believe? And those big questions about life.

I'm a big believer that one of the main reasons we read is to build empathy.

As a feminist, I certainly have real issues with some of the ways women and girls are treated in this movement, I also see the flip side of being gentle in your criticism, because people are trying to make decisions for themselves and trying to answer big questions.

I'm a big believer that one of the main reasons we read is to build empathy. I feel like when you're reading about someone's experience that is totally different from your own, I would hope, you gain insight into what someone else's life is like and develop sensitivity to that. Maybe then, you won't be so quick to judge.

And obviously to entertain and tell a good story! I hope Rachel's story is compelling and suspenseful.

Now that you're completely sold on this idea, and desperately want to see what happens to Rachel, the time has come to get the first ever look at the cover of Devoted by Jennifer Mathieu. (Click to view it BIG!)

Essentially, here's what we at Bustle have to say:

It's so pretty, it seems to match up perfectly with the themes of the story, and it's only making us more excited for next summer for when we can get inside its pages to see a full view of Rachel's interesting world. Tweet at us to tell us what you think, too!