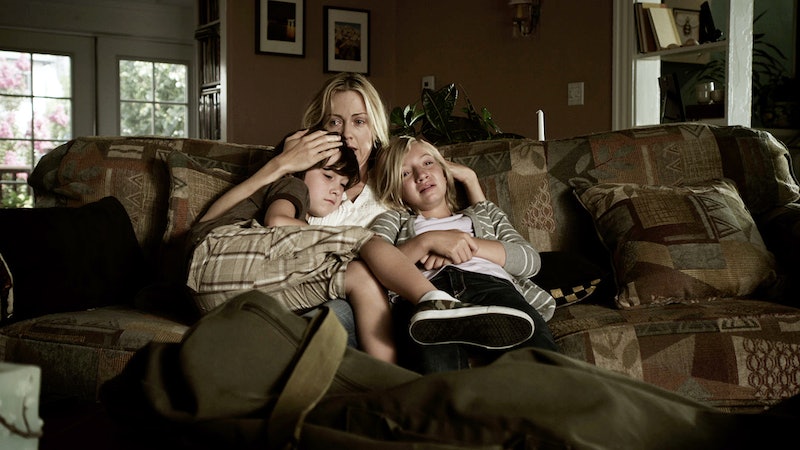 Spoilers ahead: The Walking Dead Season 5 premiere is almost here, which means it's time to prepare for a season of unprecedented darkness and gore. People will be dropping like flies, starting with Glenn, played by Steven Yeun. In the Walking Dead comic series, Glenn meets an unfortunate end at the hands of a new villain with a baseball bat, which is definitely what it looks like is happening in the Season 5 trailer. Now, a new image suggests that the end might be near for Glenn, and whether it's death by baseball bat or by zombie attack, Glenn might be the first to go in Season 5. Sad as it might be for fans to lose Glenn, a few new characters will be arriving on the scene to fill the possible void. According to Cinema Blend, Seth Gilliam of The Wire will appear as a series regular, and we'll be seeing a lot of Andrew J. West.

When Season 5 picks up, we'll see the crew making their way to Washington D.C. to find a cure, but anything could happen along the way. No one is safe. Don't get too attached to any favorite characters, because they could be joining Glenn in zombie-killer heaven. Zombie parts will fly, and it's going to be gross and awesome.

Here's what we know for sure about Season 5:

Daryl's going to be OK

The first exclusive Walking Dead image of Norman Reedus as Daryl Grimes showed Daryl beat up, gagged and bound, and looking like he was about to check out for good, but a more recent image shows Daryl back in action with crossbow in hand. He'll probably make it through the end of Season 5.

There will be A LOT of action sequences

In an interview with Larry King, Walking Dead writer and showrunner Scott Gimple revealed that Season 5 will be very action heavy. Expect a lot more explosions and zombie fights.

There will be another romance

Gimple also said there would be a new romance besides the romantical thing-thing going on between Glenn and Maggie.

It's going to be "brutal"

Andrew Lincoln, who plays Rick Grimes, spoke with Entertainment Weekly about the upcoming season, and apparently, it's going to rough. Lincoln said Season 5 will be "darker, more brutal, and there will be fallout from that. So it feels like it’s a more grown-up show. It fees like we’re heading into the heart of darkness. Brutal is the word for this season. It’s always been pretty intense, but this season I think is very hard hitting. People should be prepared for that, I think.” In other words, PREPARE TO ENTER THE HEART OF DARKNESS. Sounds accurate for a show about a zombie apocalypse.