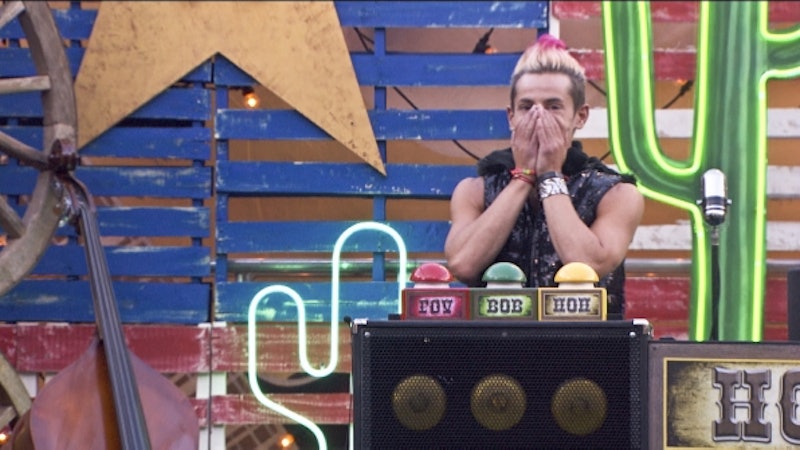 Frankie Grande started out as one of the most popular house guests on Big Brother season 16 and then slowly evolved into an even bigger villain than Devin. A bigger villain than Devin! Early in the season, I wouldn't have said such a thing was possible. Even Caleb is more likable than Frankie and Caleb stalked Amber Berzotra like a misogynistic creep in every episode leading up to her eviction. When you're more likable than a smug mood swinger and a beastmode cowboy misogynist, then you know you've fallen pretty far from grace. But I guess it's okay, because Frankie doesn't care if America hates him. He'll need to keep that attitude because America really, really hates him right now.

The fact of the matter is, Frankie has been doing and saying a lot of things that have rubbed people the wrong way. Actually, that's an understatement. Frankie has been saying things that have made people either disgusted or practically delirious with rage. He's responsible for getting Zach evicted from the house and for getting Donny evicted from the house; both Zach and Donny were beloved by America and Zach in particular had been Frankie's best friend in the house before Frankie turned on him without a second thought. So I think it's about time we reflect on some of the worst things that Frankie has said this season and why they've turned him into a total villain.

"You may only have a few days left to discover you're a homosexual and to have sex with me."

Let it never be said that Frankie isn't a master of saying one thing to your face and another behind your back. When Zach was on the block (the first time), Frankie pushed his seduction game into overdrive. Zach wasn't exactly unreceptive to his advances and totally encouraged Frankie to keep hitting on him, but the fact that Frankie was campaigning for Zach to go one minute and trying to get into his pants before he left the next is just a bad look.

"If [Jocasta] is pissed at me for putting up someone who’s going to go home next to her, then she can kill herself."

This was the first time that Frankie kicked up controversy for himself in the Big Brother house and, unsurprisingly, Jocasta's family didn't take his casual statement well. It should go without saying, but there were so many better ways to end that sentence than saying that Jocasta, Queen of the Bow Ties, should go kill herself. Seriously, Frankie?

"Any lesbians choose to become lesbians later in life."

"[Caleb and Cody should] both double-team [Victoria]... I think you should take all of her virginities in one night. All of them."

"I’m gonna take a page from my best friend Zach Attack. But I’m gonna do it better ‘cuz your shit was kinda wack... So Zach my friend, please go and have a seat. It’s time for you and Julie Chen to finally meet."

Leave it to Frankie to call Zach out in front of everyone for doing something Frankie privately helped him do. Sorry to say, Frankie, but Zach's nomination ceremony rap was way better than yours. Yours was just harsh. So much for the Zankie showmance.

"Guess how many fucks I give [about America hating me]: Zero. I'm going to be a superstar. Superstars are hated."

No worries, Frankie. If the level to which you're hated by the fans right now is any indication, you are going to be an even bigger superstar than your sister. Speaking of whom.

Frankie mentions his famous sister Ariana Grande more often than Devin mentioned his daughter and it's not just because Frankie outlasted Devin in this game. The fact of the matter is that Frankie keeps banking on the fact that he is Ariana Grande's brother to turn the house guests' opinions in his favor and make the audience fall over themselves to adore him out of respect for Ariana. I love Ariana Grande, but Frankie not so much. Sorry, Frankie, but you've turned into season 16's villain and saying things like this just proves it.