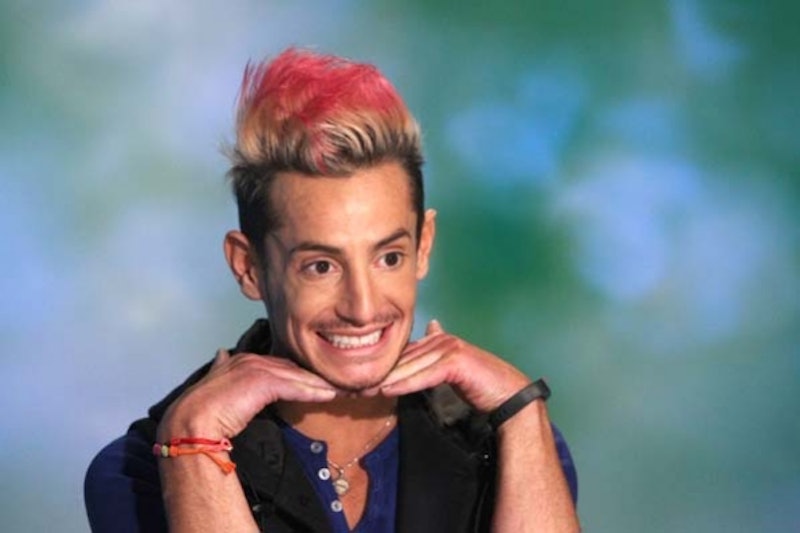 Look, I understand that you can't please everyone when you go on a reality show, especially one based on backstabbing and betraying people. But this season, Big Brother star Frankie Grande has taken betrayal to a new level. When Frankie betrayed his showmance partner Zach and nominated him for eviction, fans of Zach turned against Frankie in a major way. Frankie continued to get himself in trouble with fans by bribing them to vote for Team America with a follow back on Twitter, along with promising that his fans would "take care" of Nicole outside of the house for him. But what is the straw that might have broken the camels back? When Frankie and Derrick didn't save fan favorite and fellow Team America member Donny from eviction on Thursday. Is Frankie Big Brother 16's villain? It definitely seems that way, and he couldn't care less.

According to Frankie himself, he gives zero fucks that you hate him. He even welcomes it. Wait a minute, is this the same guy who's career depends on people following him on Twitter and Instagram, along with watching his YouTube videos? Shouldn't he, I don't know, care that people hate him? I wanted to give Frankie the benefit of the doubt, but he is really making himself look like an asshole. There, I said it. Sorry Ariana — p.s. I love your album — but your brother kind of sucks right now. I'll let Frankie's words speak for themselves.

"I'm going to be a superstar, superstars are hated." BARF. You want to keep fans, Frankie, not lose them. This isn't even the worst of it... Frankie then says that the reason Team America didn't win the Big Brother Broadway mission was because America was just not ready for a man in drag, rather than considering any other possibilities, like that the play had no impact on the game whatsoever and was done INSTEAD of saving Donny. But go ahead, blame America's "Stone Age" ways, I am sure it will help you gain followers.

Frankie is embracing his villain character, though, at least for now. Something tells me that he will be a lot less okay with the hate when he is done with the show and realizes that his actions were for all to see and that people aren't too impressed with them. Again, I don't think this would be such a thing if Frankie being a "social media mogul" didn't rely on fan support. But like any good reality star, Frankie is already getting ready to blame the editing. Frankie, thanks to the live feeds ,we have 24/7 access to your life. We know what is edited and what isn't.

And Frankie is correct there. He was the most vocal about saving Donny hours before Thursday's eviction. He definitely wasn't doing it to save Team America, he was doing it for his game, which is fine, that's part of Big Brother. But don't try to come off as a martyr, Frankie, because you're not. And if my opinion makes me hated, I'll embrace it, because according to Frankie, it's just part of being a superstar, right?