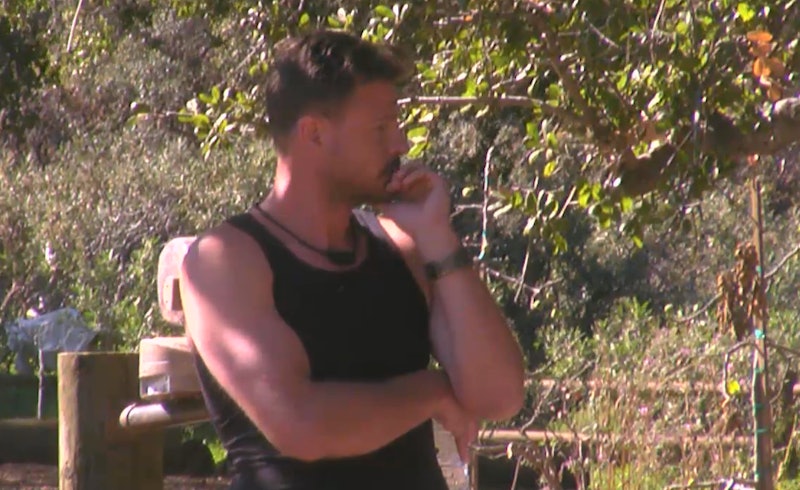 Well, it was a nice try. When the new reality show Utopia was first advertised, it seemed like a great idea: combine aspects of Big Brother and Survivor to create the ultimate reality show experiment. For a year, 15 people live together in a natural paradise and try to form their own society, free from any customs or laws to which the outside world adheres. There is no prize, just the opportunity to do something that's never been done before (and the possibility of becoming a reality TV star). But despite all the talk about creating a new way of life, some contestants couldn't shake their biases — or their overwhelming sexism. On the very first day, Josh, a 36-year-old contractor from Salt Lake City, began harassing some of the female Utopians, and by the end of the night he tried to force one woman names Hex to kiss him, after slapping her butt earlier in the night.

On their first day together, most of the "pioneers" (as the show calls them) decided to hop in the lake. Some of the women chose not to wear bathing suits. When they were all circled together in a small pond about the size of a hot tub, Josh began talking about how he "has the biggest dick here" and joking and threatening several of the women, saying he would put his penis in their faces.

Josh's behavior only worsened later in the evening, once everyone began drinking. He told one woman, Amanda, she "had to" make a bed for him, but she refused. Then he attempted to hit on Hex—who is a hunter for a living, and who told viewers she's six feet tall and 180 pounds — but she was having none of it. So he slapped her behind and tried to grab onto her. Hex (who was also quite drunk) evaded him. But later in the night they continued talking. Even as she was rejecting him, Josh tried to lean in and grab her face for a kiss. Another Utopian, Red, pushed him away.

Hex was, understandably, extremely upset that Josh ignored her refusals and tried to assault her. She screamed at him, "You're lucky I don't tear your fucking throat out!" Well said, girl.

Josh eventually went to sleep, and the next morning all the Utopians gathered to give him a trial and decide if they wanted him to stay in their community or not. (The fact that this issue was addressed by the whole cast, at least, is a good sign). It was a close vote, but Josh was allowed to stay, though he was put on a 90-day probation, during which he's not allowed to drink. If he attempts to assault anyone else, he'll be immediately thrown out. During his trial, Josh was clearly upset that some the women were saying he scared them. "You guys make me sound like a sexual predator," he said. Yes, because that's exactly the definition of a guy who ignores a woman's wishes and lack of consent. A sexual predator.

For now Josh still lives in Utopia, but once a month contestants can choose to send one of their own out the door. If they're wise, Josh won't be sticking around paradise for too much longer.