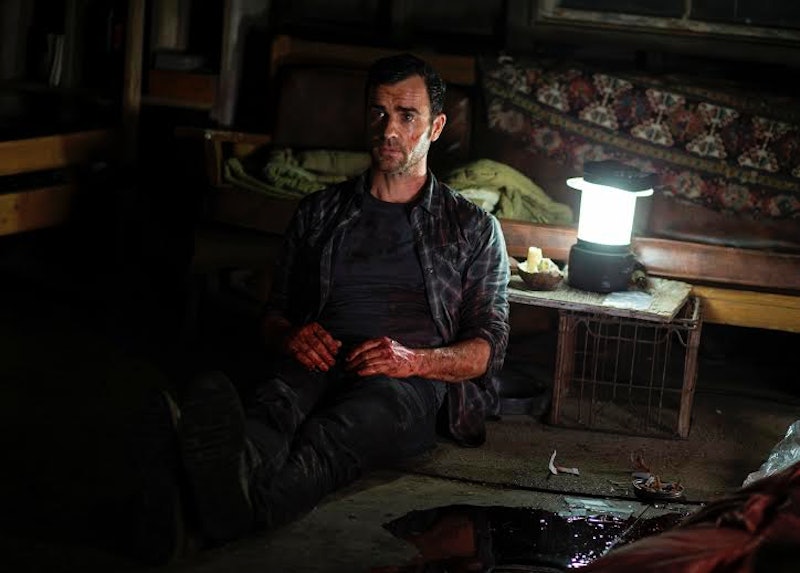 Can we all agree that something is very clearly wrong with The Leftovers ' Kevin Garvey? From hallucinations to waking nightmares, the head of the Garvey clan and the police chief of Mapleton, New York, has been dealing with some kind of messed up problem in his head throughout the entire first season of the hit HBO drama. On The Leftovers ' Season 1 finale, "The Prodigal Son Returns' Kevin called his girlfriend's brother, aka Matt the disgraced reverend, to help him rid the body of the Guilty Remnant's Patti, Kevin had a nightmare that Matt sent him to the same mental institution as his father. He then dreamed that Patti was still alive and straddled him, kissing him and telling him it was time to "wake the f*** up" which he then promptly did in Matt's car. So what exactly is going on with Kevin? Is he legitimately going crazy?

It's very possible that Kevin needs to actually check into his father's mental asylum home for a little while in Season 2 to get a little brain check up but perhaps there is actually a deeper, emotional route to Kevin's mental problems? Anything is possible and I've come up with a few possibilities as to what might be going on in Kevin's messed up head:

Many of the disorders on this list seem over the top and much too intense, but considering this is the show where a woman committed suicide by slicing her neck open and a group created life-sized doll versions of people who disappeared in the Departure just to screw with the Mapleton townfolk, anything is possible. Psychosis symptoms include anxiety, sleep changes, delusions, hallucinations and difficulty concentrating. Sound like anyone in particular?

This is a depressing thought but what if Kevin is showing early signs of dementia? Dementia is a very serious brain disease that causes memory loss, personality changes, paranoia and hallucinations among many other symptoms. What if Kevin's father shares this disease and now Kevin is getting closer and closer to being considered just as "crazy" as him?

Or maybe Kevin has a tumor in his brain? Before you all ask why I would even think of making Kevin's life any worse, the possible mass does not need to be malignant to make significant changes in his mind. Even benign tumors add pressure to the brain which can cause personality changes, blackouts, memory loss, and hallucinations.

PTSD Or Something Similarly Emotional

Despite all of these possible legitimate mental disorders, I still believe Kevin is holding onto some guilt for his actions when the Departure happened, aka his affair with a mysterious woman (and maybe the part where she Departed while they were having sex). That, along with the fact that he's witnessed everyone in his town deal with the most terrible moment in their lives, has to have affected his mind and body at least a little. Perhaps his symptoms come from a manifestation of that guilt and now with Patti killing herself right in front of him and the GR essentially causing chaos in his town, he's about ready to pop? It wouldn't be the worst explanation, that's for sure.