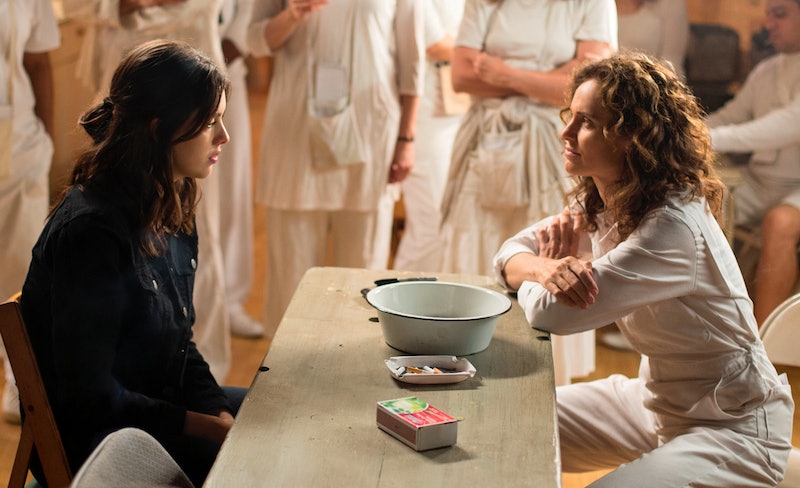 All season-long on HBO's latest drama, those prone to look to spoilers from the source material have been foiled at every turn. The Leftovers book was all but a world away from the series. But then, in the final moments of the Leftovers ' Season 1 finale, that all changed. Sure, we aren't going to forget the completely different journeys that brought us to the finale moment ripped straight from Tom Perrotta's book, but it seems that the biggest twist of all is that Damon Lindelof managed to keep the very last line of the novel and, potentially, its hopefulness in tact.

No, the novel did not give us potentially crazy Kevin Garvey. It didn't allow Jill to make it all the way to the Guilty Remnant. It didn't reunite Tom with anyone in his family. It didn't have Ann Dowd's fantastic GR leader kill herself. It didn't send the GR into a suicide mission to "return" the Departed. And there were certainly no cul-de-sacs engulfed in flames. But the one last moment of similarity comes at the hands of Nora Durst, who stands on Kevin's steps in the final moments of the finale. She's holding a baby and as Kevin and Jill come home with the suddenly domesticated wild dog they once had chained up in their backyard, Nora simply says, "Look what I found." It's exactly what she does in the final line of the novel.

Of course, this begs a few questions of the series. It's spent an entire season taking Perrotta's original story to new heights and new levels of violence. It created back stories for the Garveys the day of the grand Departure — something we never saw in on the page. It took Jill all the way into the Guilty Remnant instead of letting her get sidetracked by a cute boy with a crush. And yet, we end up on the exact same note: a symbol of hope and new life (the baby), being cradled in Nora's arms just as she was about to give up on the new life she'd tried to give herself.

In the book, at least the way I read it, that conclusion was laced with hope, the way the series' signature score seems to be — those clusters of light, airy tones in a sea of urgent strings. In the novel, Nora's discovery seemed to note that the world was in fact terrible, but that life could go on. The brand new life in her arms commanded it to be so.

But, seeing as The Leftovers has been renewed for a second season, a pall hangs over Nora's pleasant words. Despite the fact that the ashes of the Guilty Remnant fire seemed to almost cleanse Mapleton of the building violence that had been created by the past nine episodes, and despite the fact that Laurie joyously reunited with her son Tom somewhere near a river... and despite the fact that Holy Wayne and his hugs are a thing of the past thanks to his death in a diner bathroom, Nora's words can't be as positive as they are in the novel. If they were, there would be nowhere to go in Season 2.

If Nora's words are so hopeful, that would mean Season 2 is going to be a barrage of Kevin, Nora, & Jill figuring out this crazy new family of theirs. Perhaps Laurie and Tom go on a wacky road trip in search of Christine, who fled from a nondescript bus stop. And Rev. Jamison spends his days bringing the surviving GR members back to the Lord. Sure, that's what the series' signature music and Nora's bright words could mean. But that wouldn't make for very good television.

Instead, it seems that out of the ashes, these characters appear to find hope. And while we can be certain that Damon Lindelof and Co. haven't exactly written an entire second season just yet, we can be sure that they're not about to give us a plucky family drama about these folks recovering from one helluva year. They've just caught their breath. And they'd better hold onto it, because if I know Lindelof's style (and six years of watching LOST tells me I do), things aren't always going to be so hopeful.