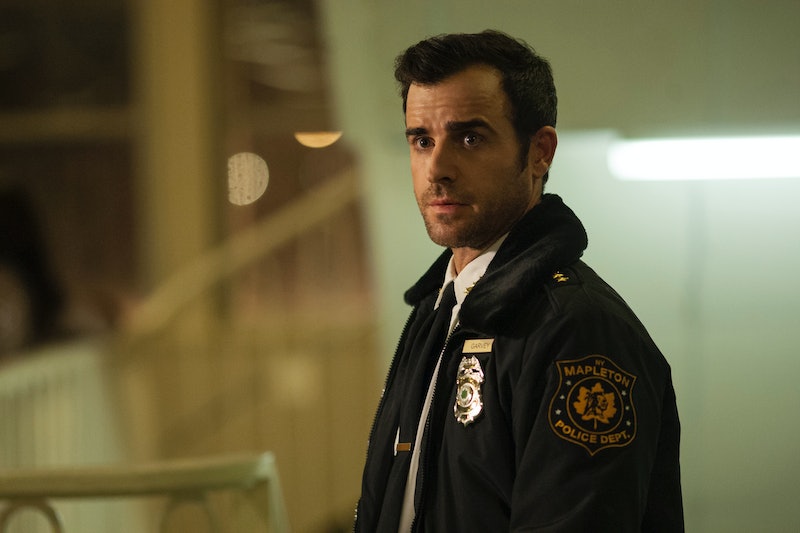 Although many of the numerous questions I have for HBO's The Leftovers pertain to the whole, you know, two-percent-of-the-population-vanishing thing, I also have a handful of questions for The Leftovers' Kevin Garvey (Justin Theroux). Man, oh, man is something crazy happening to that poor guy. Throughout the first few episodes of Season 1, I thought he was just a lonely, single dad driven to the bottle because his wife left him for a cult. You know, the usual small-town fare. But now that the show's progressed and we've delved further into the maybe-kind-of-Rapture dealio (Note: we still know absolutely nothing about anything) Kevin has proven that he's more than just a sometimes-drunk. He's a whole bunch of everything rolled into one man in a uniform who, more often than not, has blackouts, hallucinations, and the desire to shoot rabid dogs. Basically something seriously weird is going on, and he's a big part of it... whatever "it" actually is.

In two of the most recent episodes,"Solace for Tired Feet" and "Cairo," we found out a lot more about Kevin or, rather, we kind of found out a lot about Kevin and then were extremely confused about everything. In one episode, he searches for his father who's escaped from a psychiatric hospital, and then is told by his father that he's basically being requested or summoned to do something pertaining to the maybe-Rapture. And in the other episode, well, he has a blackout in which he kidnaps Big Red, er, Patti of the Guilty Remnants who then kills herself after telling Kevin that he needs to "understand" what's happening regarding the Departed. (I told you nothing makes sense.)

The worst part about everything that's happening to him is that he doesn't know what any of it means, and he thinks he's going absolutely crazy. So what is actually up with him and why does he always have those blackouts? Here are a few theories:

He's been mixing too many pills

When his father seeks refuge in Kevin's house, Kevin, Sr. comments on all of his son's pills and how he shouldn't be mixing them together because "that shit fucks with your head." Kevin, I'd listen to your dad, you know, the guy who was sent to a psychiatric hospital. I mean, there are seriously almost 20 bottles just strewn across his room. Add in a few beers, and obviously hallucinations and blackouts are going to happen.

He's being recruited for a secret mission

According to his father, an ominous and mysterious "they" are "not going to let [him] off that easy." What does this freakin' even mean? Seriously, what does this mean? Does he have a connection with some unknown source that's trying to contact him? (Hey, if I-like-to-impregnate-Asian-women Wayne thinks he's a kind-of-prophet, then why can't Kevin be one?).

He suffers from a mental illness

Right now we're basically at a point where either Kevin and his father actually suffer from a mental illness, or they are a part of some larger plan. I'm hoping for the latter because that would just make the show completely nuts in the best way possible.

All I can say is that I hope we get some answers by the end of the finale because I can't handle another LOST situation. (Sorry, Mr. Lindelof.)

More like this
Hayden Panettiere Admits "Addiction" To Alcohol & Opioids Before Going Sober
By Jake Viswanath
Before 'Umbrella Academy,' Ritu Arya Briefly Stopped Acting To Pursue An Out Of This World Career
By Gretchen Smail
Is 'Stranger Things' Fan-Favorite Joseph Quinn Dating Anyone? Doja Cat Volunteers
By Grace Wehniainen
5 Theories About The Stranger Things Spin-Off
By Gretchen Smail
Get Even More From Bustle — Sign Up For The Newsletter