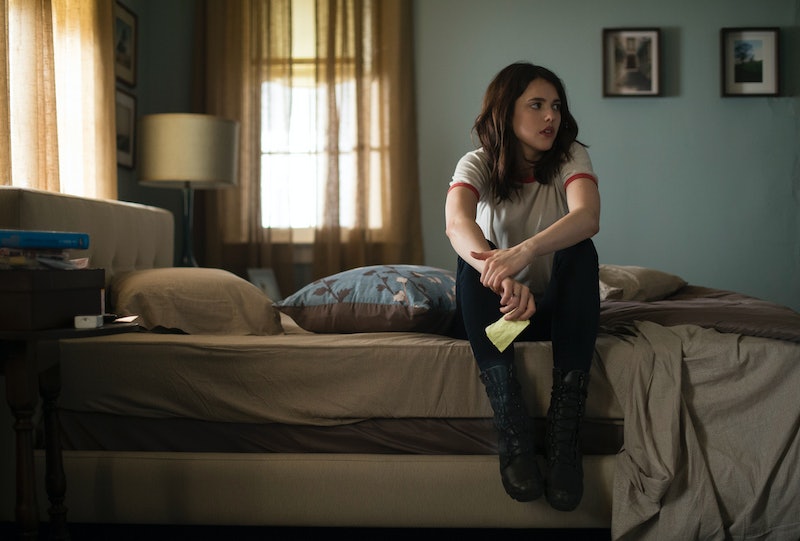 We've spent a season with The Leftovers, looking for answers and meaning in the molasses slow, sometimes incoherent plot. The season finale, "The Prodigal Son Returns," (which picks up right after the events of episode 8, with Patti dead and Kevin grieving) gave no answers about The Departure (but creator David Lindelof and author Tom Perrota have basically promised that will never happen, so we should all just give it up), but it did reveal what the Guilty Remnant has been up to all season, if not exactly why.

So what have those smoking psychopaths in white been up to? They purchased body dummies that match the Departed from Mapleton. They stole pictures of them and items of clothing from their homes. And then, on Memorial Day, they positioned these dressed up dummies in the homes of their families to remind them of the way life could have been if the Departure had never happened. It's an eery and awful sight. Nora comes into her kitchen to see the mummy-esque dummies of her husband and children sitting around the breakfast table waiting for her.

That's the what, but what about the why? Megan gives us our only explanation, a simple "we made them remember," written on her notepad. But what were the GR trying to get Mapleton to remember, exactly? Their lost loved ones? The pain of the day that it happened? That they still don't have any answers as to where the Departed went or why? All of the above?

Less pressing than why the Guilty Remnant decided to torture the citizens of Mapleton though is the effect that their plan had: The town has gone crazy and militant, rising up against the GR with, literally, a bloody vengeance. After months and months of psychological torture, the Mapletoians snapped. The life-like dummies dressed in their dead relatives' clothes was the final straw (just as the GR hoped it would be) and riots have broken out in the streets. Citizens are beating the GR members and shooting them down in cold blood and burning down the houses the GR lives in. Was chaos all the Guilty Remnant was after all along? If so, they've gotten it in spades.

Kevin's arc in the episode is a long, complicated journey. He and Matt bury Patti in a ditch, read some scripture and go for a road trip. Kevin has a hallucinative dream and sees his crazy father and dead Patti and it's all very Leftovers-y. Holy Wayne even makes him a dying promise that he'll get his family back. SO. LEFTOVERS-Y. When Kevin makes it back to town though, the aforementioned chaos is raging, much like the fire that's engulfing the house that Jill is in. Remember, she joined the Guilty Remnant to be with her mom after her friendship with Aimee fell apart.

Kevin goes full hero and saves Jill from the fire, but if he wasn't over having Laurie back in his life before, he definitely is now. He shoots her the look of death after he rescues Jill. Laurie is the worst, so I'm totally OK with this.

As for Nora, she's scarred by the experience of seeing her family again (in dead dummy form, of course), and writes Kevin a long Dear John letter that reads shockingly like a suicide note. She goes to deliver it to him only to find the baby that Tom has been caring for (the girl he was traveling with abandoned it because she couldn't deal with Holy Wayne's betrayal) on the Garvey doorstep.

Annnnd….END OF SEASON. Yep, that's all we get for our ten episode commitment to the show. I don't mind that The Leftovers is slow. I don't mind that depression drives most of the characters. I don't even mind, really, that we never learn anything about The Departure. What I do mind is being asked to make a big investment for such a small return. The Leftovers has finished its first season and the audience is left with an emotional void when all is said and done.