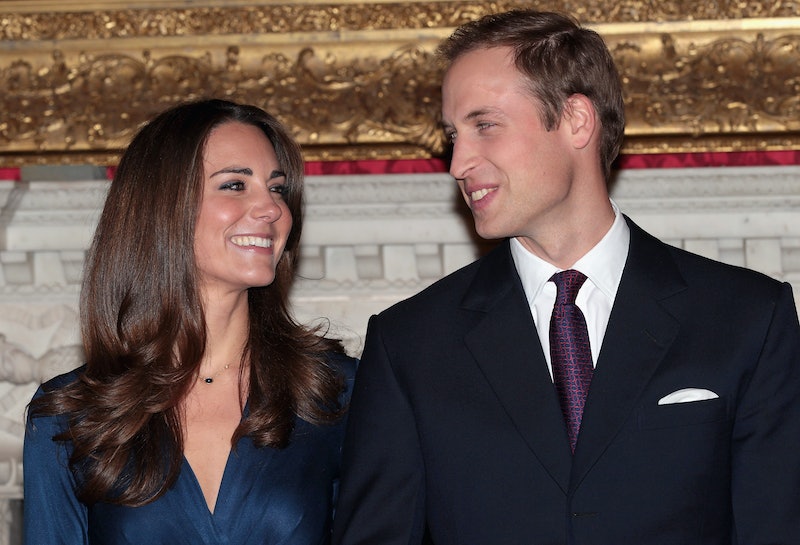 Kate Middleton is expecting a royal baby — for real this time. In July, rumors once again began floating around that Middleton was pregnant, news that was confirmed by her so-called best friend whom Middleton apparently doesn't mind running to news outlets to confirm news that Middleton and the royal family have yet to confirm themselves. Sure, that story should have been taken with a grain of salt since Middleton has been pregnant in the media many times, but we all suspected that she and Prince William were at least trying. It turns out that our suspicions were confirmed. Clarence House office announced Monday morning that Middleton is pregnant with her second child, so it's actually official now, you guys.

(Update: While visiting the Brookhill Children’s Centre in Woolwich, a volunteer at the center says that Kate Middleton revealed her due date as being the "mid-to-end of April.")

Clarence House is one of the royal residences open to the couple in London, so they're more than a bit more qualified to announce this kind of news on the couple's behalf than a random friend of Middleton's. And, of course, the royal couple issued a statement of their own right after to prove this news is valid. There's not a whole lot of information available about the baby or the pregnancy right now — not even when Middleton is actually due — but we've still managed to get enough information to get really, really excited about this. So here is everything we know about the royal baby.

1. Middleton is experiencing complications with the pregnancy

When Middleton was pregnant with Prince George, she was forced to announce it early after she was hospitalized due to severe morning sickness. As it turns out, Middleton has a condition called hyperemesis gravidarum, which requires her to have a lot of extra medication, hydration, and nutrients while pregnant. This same condition is acting up again now and she is being treated for it.

2. Prince Harry is now fifth in line to the throne

As Prince William's younger brother, Prince Harry was once second in line to ascend to the throne. However, after William married Middleton and had Prince George, that pushed Harry to fourth in the line of succession. The birth of the second royal baby will push Harry to fifth in line, which is probably just fine with him. Prince Harry doesn't seem ready to settle down like Prince William has yet.

3. Alexandra is a possible baby name, if it's a girl

Before Prince George Alexander Louis was born and his name announced, there was a lot of speculation about what Middleton and Prince William would name him (or her). George was one of the most popular, but Alexandra, after one of Queen Elizabeth's middle names, and James were also popular choices.

4. We've seen two more heirs to the throne born in our lifetime

Prince Harry and Prince William were both born in the '80s, which means their births and the subsequent celebrations were just narrowly missed by a '90s baby like myself. Now I, and every other person born after 1990, will have seen two more direct heirs to the throne born in our lifetime. This is the kind of thing that brings generations together, you know.

5. The baby will be the most famous baby in the world

Prince George had his own Wikipedia page before he was even born. This second royal baby is just a concept at the moment and he or she is already topping the headlines of every major news outlet in the United Kingdom and the United States. Sorry, Blue Ivy and North West, but you tried.

6. Everyone's really excited about it

Here's the official announcement that the Duke and Duchess of Cambridge have released about the pregnancy:

The Queen and members of both families are delighted with the news.

As with her first pregnancy, The Duchess is suffering from Hyperemesis Gravidarum. Her Royal Highness will no longer accompany The Duke of Cambridge on their planned engagement in Oxford today. The Duchess of Cambridge is being treated by doctors at Kensington Palace.

I hope you're as "delighted" as the Queen and members of both families, because I'm already losing my mind.