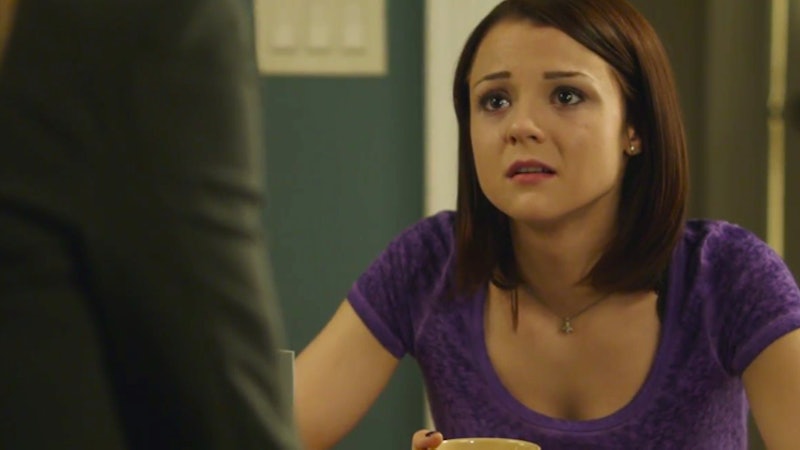 Is Carter just messing with us now or is she trying to make every Finding Carter fan really hate her guts? Crash shot Max on Finding Carter last Tuesday, simultaneously breaking the hearts of and enraging every fan of the breakout MTV series. And our heartache isn't nearly over because, apparently, Carter seems to think that Crash deserves sympathy. In this exclusive sneak peek at Tuesday's new episode of Finding Carter , Carter leaves recovering Max at the hospital to come to Crash's rescue. Because, even though everyone else has realized that Crash is the worst of all time and a raging lunatic, Carter's still convinced that he deserves her attention.

We absolutely should've seen this coming because Carter's attracted to Crash like he's an endless supply of fro-yo covered in gummy bears. Of course she wouldn't think he's the villain of this story but rather, another victim. I really thought (and hoped) that after Crash left her alone in the Quik'N'Easy with Max bleeding out on the floor from a gunshot of his doing, she'd come to her senses that Crash is just NOT a good guy. At all. And realize, like Gabe says in this sneak peek, that's he's a really unstable person. Apparently not, though.

How frustrated are you after watching this? I know this is essentially all Bird's fault for sending Carter to jail for stealing her mom's jewelry in the first place. But in this case, she's just trying to get Carter to do the right thing by everyone's favorite character, Max. I mean, he's unconscious in a hospital bed and ALMOST DIED. C'mon, Carter, make the right choice between your best friend who loves you and this crazy jerk that actually went out and bought a gun. PLEASE. Because I'm not sure you can redeem yourself if you don't.

P.S. — Can we get #JusticeForMax trending on Twitter or something?