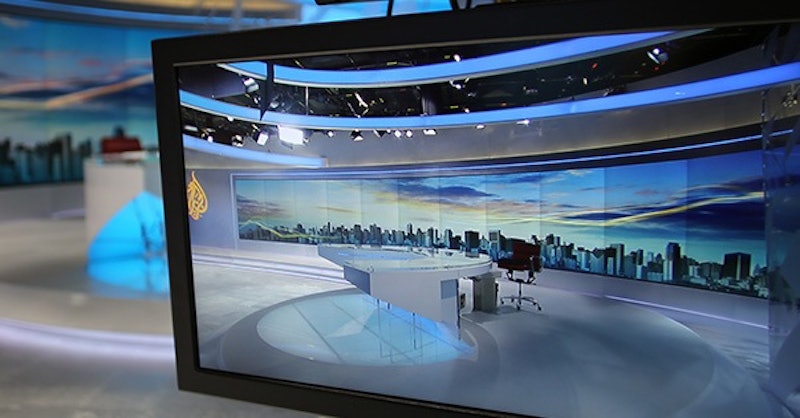 The long-anticipated launch of Al Jazeera America will bring the news network to over 48 million homes Tuesday afternoon. Some are calling this the most significant news media event in years.

Al Jazeera purchased Current TV last December, and has been building its New York headquarters ever since. The network has established 12 bureaus across the country, employing a staff of nearly 900. The brand's mission statement says it aims to provide unbiased, in-depth reporting to replace the opinionated, niche-driven newscasts that have frustrated Americans for years.

The channel officially launched at 3pm ET, and broadcast its first news hour at 4pm ET. Every day, the channel will show fourteen hours of "straight news," as well as more in-depth documentaries on contemporary issues. They have also showcased their plans to show fewer commercials than any other news channel on television (six minutes per hour, compared to the average of fifteen).

Some, like the Guardian reporter Glenn Greenwald, are skeptical that Al Jazeera America (AJAM) will live up to its lofty goals. He suggests that the channel may refrain from reporting controversial, hard-hitting stories in order to appease Americans who already have negative perceptions of the brand. He also reports on internal struggles that are already taking place within the organization.

Others worry that the network will spur a resurgence of Islamophobia, hearkening back to the Bush administration's rocky relationship with the network during the so-called "War on Terror." As Media Matters points out, many conservative pundits do in fact continue to call Al Jazeera "anti-American."

Here's a link to help you find your local Al Jazeera channel. Sorry Time Warner Cable subscribers, but (at least for today) you're flat outta luck. Al Jazeera is reportedly still in talks with the provider.