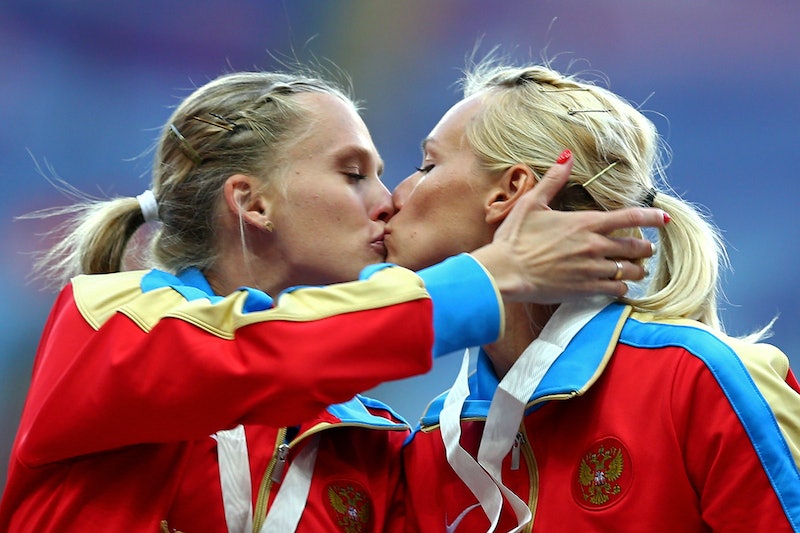 When Russia insisted that the post-win kiss between sprinters Kseniya Ryzhova and Tatyana Firova was "celebratory," and in no way protesting the country's anti-gay laws, we didn't buy it. After all, that sort of public same-sex display is actually illegal in Russia, where the World Athletics Championships were held.

On Tuesday, both athletes claimed that, actually, it was sort of an accident.

The storm of emotions going through us was incredible. And if we, accidentally, while congratulating each other, touched lips, excuse me. We think the whole fuss is more of a sick fantasy, not grounded in anything.

Actually, the media storm surrounding Kiss-gate was based more in general international outrage over Russia's new law banning "gay propaganda" than any sort of t.A.T.u.- esque "fantasy." The anti-gay law, signed in by President Putin on July 29, bans (and we quote) "propaganda of nontraditional sexual relations." The financial penalty for promoting gay propaganda in the media is the equivalent of $3,000.

In Russia, women kiss each other on the cheek in greeting or celebration, so what Ryzhova's basically saying is that the two sort of missed.

Or, they're calling it an awkward accident to avoid, you know, the criminal charges they could face if the kiss was on purpose.

As Bustle reported of the escalation of international backlash against Russia's new law:

As the 2014 Winter Olympics grow closer, calls to boycott the Games in protest are escalating. Though President Obama has made it clear he won't authorize a boycott, a growing number of American athletes and key international figures have spoken out in support of protest — but no countries have withdrawn their role in the Games yet. (There has however been a more successful international boycott of Russian vodka in response to the initial enactment of the law.)

British academic Stephen Fry even went so far as to compare the situation to the 1936 Games in Nazi Germany.