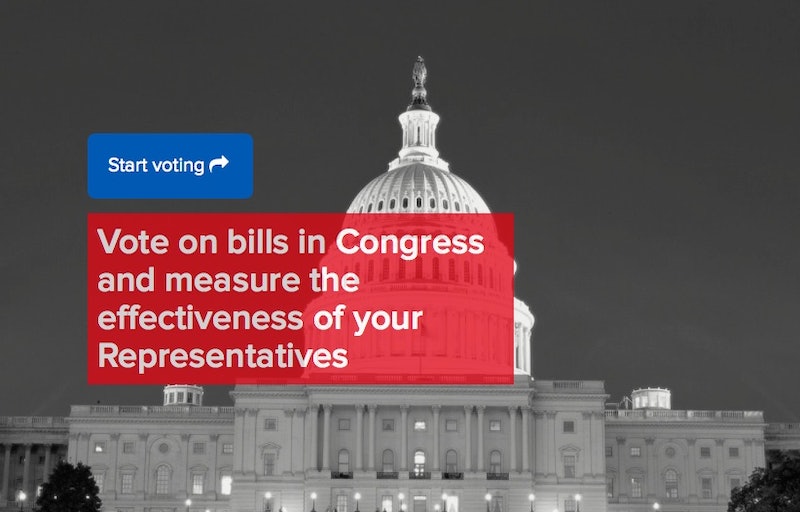 Ever felt like you have no voice in the halls of Washington, D.C.? Well, sad to say, you're probably right. Research has shown that unless you're fantastically wealthy or privileged, your elected representatives probably don't listen to your opinions on big votes or issues anywhere near as much as you might like. So, meet the new website VoteTocracy, which lets you compare your votes on real-world bills to those of your elected representatives. It's clean, quick, user-friendly, and kind of a blast.

It's been refreshing lately to see new technology help to facilitate political engagement — in that way, VoteTocracy calls to mind the ingenious BuyPartisan app, which lets users check their fridge's politics. VoteTocracy, however, is more about direct congressional accountability, and putting your representatives on email blast to let them know how you feel. It provides you with a list of different bills awaiting votes in the House and Senate, and invites you to place a vote yourself, Then, it contrasts your vote to that of your congresspeople, and helps you shoot off an email stating your support in one direction or the other.

Well, now you know my congresspeople, but c'est la vie — "Barbara Lee speaks for me," like the campaign signs say. Anyways, you register an account with your city and zip code, and VoteTocracy identifies your elected representatives — two from the Senate, one from the House.

Then, you need only scroll down to see the vast array of "bills in motion," the sprawling list of legislation that's either moving through Congress, or stalled out in the process.

Want to weigh in on infrastructure spending? Immigration? How about national defense? Being the left-wing Berkeleyite I am, I decided to cast my first vote for the Employment Non-Discrimination Act, better known as ENDA. The bill passed the Senate with bipartisan support in Nov. 2013, but has languished in the blood-red Republican-controlled House ever since. If I had my way it would pass, and now by simply affirming that stance with a click, I can send a raft of messages to my elected representatives. And others, too — VoteTocracy also fills you in on the relevant sponsors and subcommittee members.

Simply put, it's a powerful tool for communicating political support on a given issue, and if it really takes off, it could be a really positive force for political engagement. Obviously, some of that engagement will be by people you disagree with, on issues you'd rather not see come to pass — I, for example, am not likely to vote "yes" on any of the dozens of anti-Obamacare bills on offer.

But engagement is engagement, and whether you agree with the politics or not, there's something to be said for having an electorate that really gives a damn. I highly encourage you to go give it a look. It's a ton of fun, and if nothing else, it's a surprisingly quick and easy resource to scan for some of the different bills that are stalled or moving in Congress right now. If you're anything like me — a little politically obsessive, perhaps? — you could easily end up getting sucked down the rabbit hole.