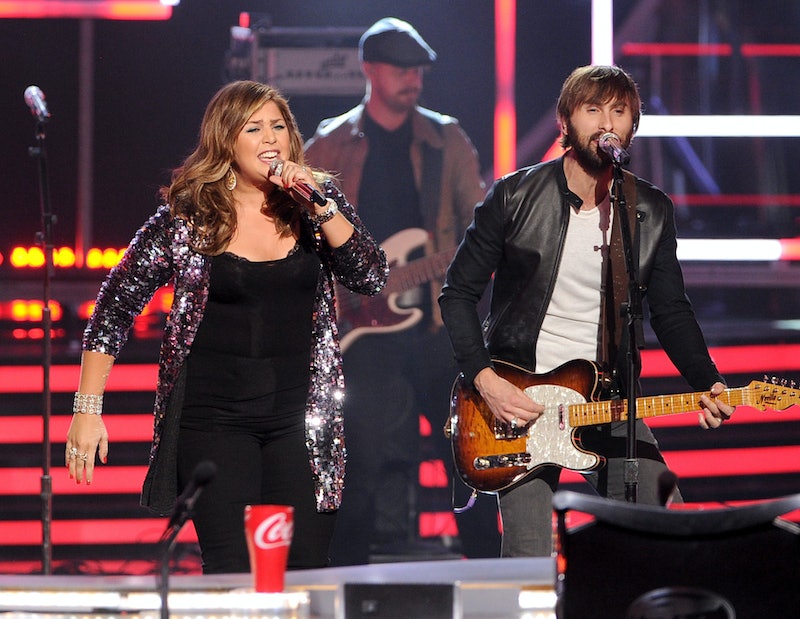 A certain Lady Antebellum member recently got some very exciting news. Lady Antebellum's Dave Haywood welcomed a baby boy with his wife Kelli Cashiola Haywood on Sunday night. A rep confirmed the news to Us Weekly adding that the baby weighed in at seven pounds and was 19 inches long. Haywood revealed the news on the Lady Antebellum Twitter page as well writing, "Mom & Dad are doing great and couldn't be happier!" as well as sharing the baby's name. So why haven't I told you the name yet? Well, it's because you need to sit down and prepare yourself, for this one is going in the Celebrity Baby Names Hall of Fame. Even if you aren't a Lady Antebellum fan, you'll want to hear this.

The Haywoods named their son — wait for it — Cash Van. CASH VAN. Now, I'm sure you have a few questions, so let's all get through this together.

According to Haywood's rep, the name is a family one: "Cash is taken from Kelli’s maiden name Cashiola and Van is Dave’s father’s name." Now that's all good, but still, there are a few problematic things about Cash Van. Most obviously, it sounds entirely too reminiscent of Cash Cab . Like, really? Cash Van? Soooo close to Cash Cab. I don't have anything against Cash Cab, but do you really want your kids' name to remind people of that show they used to watch in college when nothing else was on and they were procrastinating? Probably not.

Also, my second thought was that it rhymes with trash can. Is that cruel? I hope no infants who could become future bullies are reading this. I really am not trying to give anyone any ideas, but I think this kid will be better off going just by just Cash. Or just Van. He could even switch it up and go with Van Cash because, honestly, they're fine names on their own, but put 'em together in the wrong order and you're in trouble.

I'm pretty sure I know what the real problem here is: using too many nouns. My boyfriend has joked before that with the last name Berry, he'd name his kid Straw. And it's a joke. It's simply a comment on how people cursed (my word, not his) with noun names just have to deal with a smaller possible name pool. What the Haywoods did was go right ahead and combine two "real word" names on their own thus adding Cash Van to the ranks currently occupied by Summer Rain, Blue Ivy, River Rose, and Royal Reign.

But maybe I'm just doubting little Cash Van too much. Maybe, much like the "Boy Named Sue" (by Johnny Cash who is not where Cash Van gets his name), Cash Van will be pushed to prove himself. One day I'm going to be a crotchety old lady still attempting to read my celeb gossip on a laptop instead of through the screen implanted in my eyelids like the youngin's, and Cash Van will no longer remind people of a game show, but will instead be a super famous and talented rock star. And I'll sit there knowing I should've never doubted Cash Van. Not for a second.