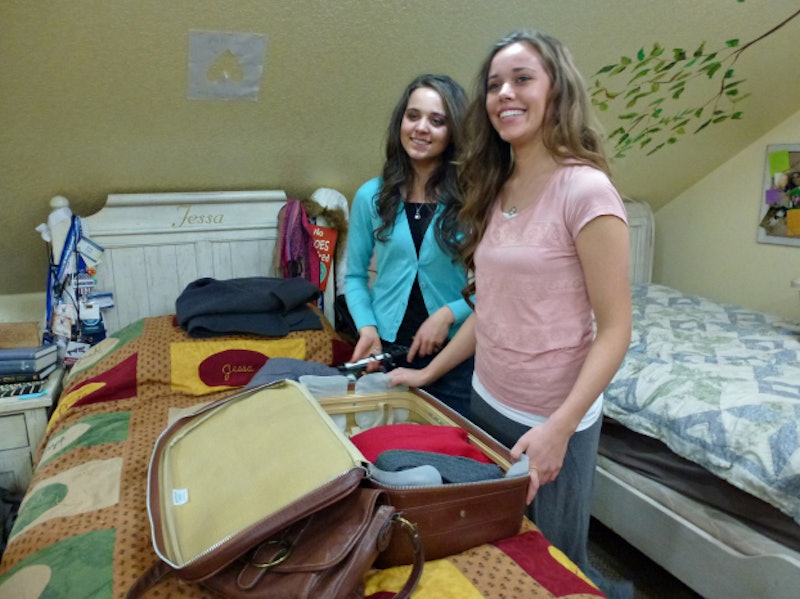 If you're as obsessed with TLC's 19 Kids and Counting as I am, you've probably noticed that the wardrobe on the show doesn't change much. Boys are in pants and girls are in skirts or dresses — no exceptions and generally, no questions asked. It's just one of those things about the Duggar way of life that doesn't make sense to most of us viewers at home but that we just tend to accept, like why Josh's job in Washington D.C. sucks so hard or why all those kids actually chose to share a room. Not the way I choose to live my life, but the Duggars definitely seem happy doing it their way. But sometimes my curiousity gets the best of me and I just have to ask, why don't the Duggar girls wear pants?

Like many of their family traditions, it all springs from their religious beliefs. The girls don't just try to dress modestly, but also femininely. As Michelle once explained in a blog on the Duggars' official website, her daughters have "grown up being dressed modestly, and in clothes that are definitely more feminine apparel." I know what you're thinking: There's no such thing as feminine apparel. But let's hear the girls out, maybe their view isn't as strange as it first seems.

In their book Growing Up Duggar (as quoted by Cosmopolitan), co-authors Jana, Jill, Jessa, and Jinger discuss why they dress the way they do.

We do not dress modestly because we are ashamed of the body God has given us; quite the contrary. We realize that our body is a special gift from God and that He intends for it to be shared only with our future husband... We avoid low-cut, cleavage-showing, gaping, or bare-shouldered tops; and when needed, we wear an undershirt. We try to make it a habit to always cover the top of our shirt with our hand when we bend over. We don't want to play the peekaboo game with our neckline.

So it all goes back to religious modesty. Though the Duggar daughters are just about the prettiest people I've ever seen, they're probably the most modest TV stars in existence. I can't say the same for their father, but that's a different story for a different day.

And although during her stint as a volunteer firefighter, Jill refused to wear traditional firefighting gear and instead turned her Nomex uniform pants into a long skirt to wear on the job, it seems like as she's gotten older, she's decided to renounce a skirt for pants when the activity calls for it. How adorable does she look posing with husband Derrick Dillard in these snow pants?

And if you're upset about the pants-wearing thing, you probably shouldn't devote much time to thinking about the girls' swimwear, or your head might explode.