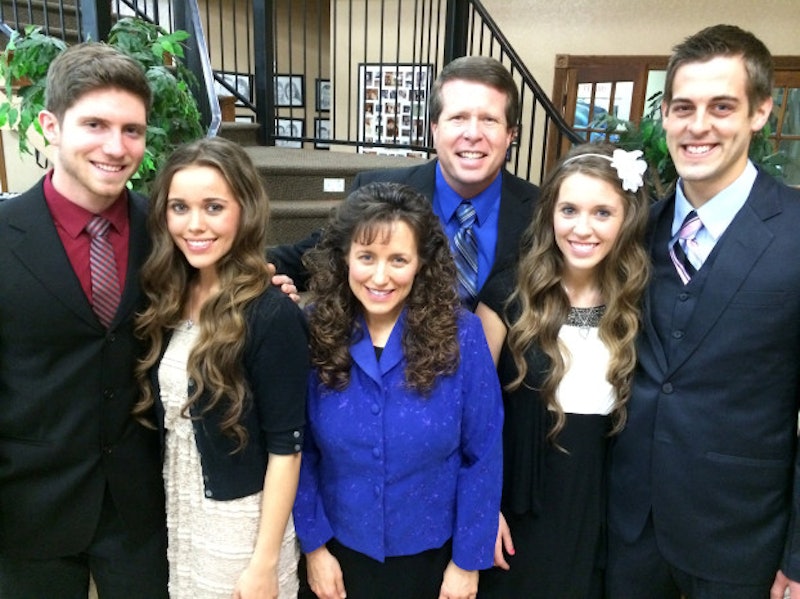 From the way they dress, to the way they date (well, court), to the way they perm their flawless long hair, TLC's 19 Kids & Counting makes it clear that religion influences the Duggars' lives in many ways. What's less clear, however, is what exactly that religion is. And though the famous family is all about the Big Guy Upstairs, you won't ever catch the Duggars sitting next to you in church. Their very specific subset of Christianity is exclusive to the point that they reject everything today's churches have become. And in their case, that seems to be a very positive thing.

For the Duggars, everything stems from religion. The fact that they're even on TV for us to watch all relates back to their faith. In fact, on their family website, the Duggars write that they chose to star in a reality series primarily for the reason that it would give them the chance to "share with the world that children are a blessing from God," and only agreed to do the show under the condition that their religion could remain a part of it. After all, why do the Duggars do anything they do? Because Jesus, that's why.

So what religion is this midsized colony of entertaining and well-behaved children? According to the Duggars themselves, they're "independent Baptists," which means that just like the Sister Wives crew, they've branched off from a bigger religion to be a part of their own, more exclusive sect. Why? Probably because most of what the Duggars believe in doesn't match up with what traditional Baptists believe... or there would be a lot more families with kids in the double digits.

And since Jim Bob (ugh, let's not talk about him) and Michelle's brood is homeschooled, a lot of their social interaction depends on either visits from their good friends the Bates family, or their church community, which is actually pretty small. The family attends what they call a "home church," and thanks to a blogger who goes to that church on a regular basis, we have a little insight into what a "home church" actually is. Apparently, the Duggars (and a few other families) meet in a low-profile, unassuming space, don't take government tax benefits, and don't pass around a collection plate. Instead, they gather to hear from each other, the church elders (Jim Bob included), and the occasional guest speaker, followed by food and fellowship. The blogger (who calls herself Proverbs Mama) describes the experience.

You'll see a family with 21 children who sit up front and behave amazingly well. The Duggars sit in the back generally, and we like that too. When someone is as popular and in a leading position, it is always nice to see them put themselves in the back seats and not be on display as if important. Well done, Duggars.

Is it possible this lady also attended Jill's wedding? I need details. And probably a few hairstyling tips too.

More like this
Airris From 'MAFS' Says He Doesn’t Regret Going To Decision Day With Jasmine
By Brad Witter
Shaq Might've Spoiled His Relationship Status With Kirsten After 'MAFS'
By Brad Witter
RHOP’s Robyn Dixon Explained Why Juan Paid For Another Woman's Hotel Room
By Brad Witter
Megan Mullally & Nick Offerman’s Relationship Includes Several Collaborations
By Caitlin Gallagher and Brad Witter
Get Even More From Bustle — Sign Up For The Newsletter
From hair trends to relationship advice, our daily newsletter has everything you need to sound like a person who’s on TikTok, even if you aren’t.