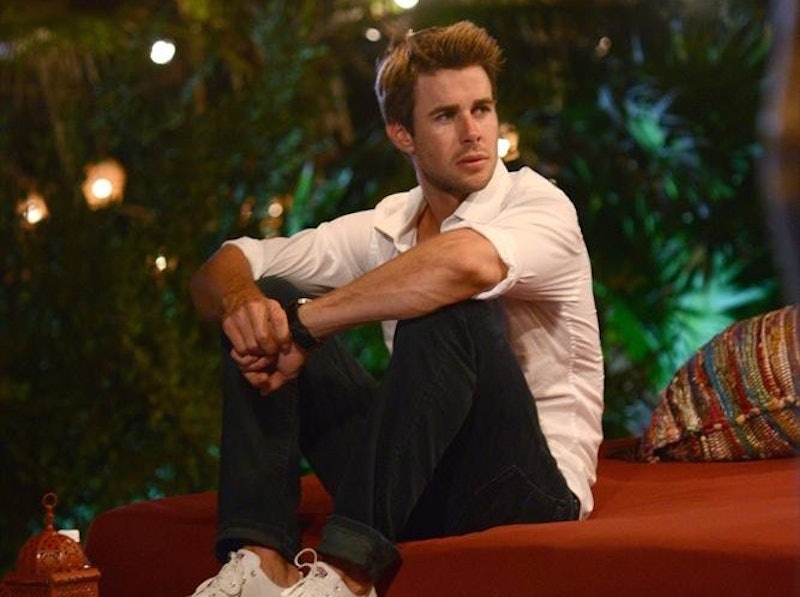 We've waiting all season for this: Finally, the couples on the Bachelor in Paradise finale have to choo-choo-choose a partner once and for all, or leave paradise. All day, you waited, hoping to watch as the drama unfolded. Would Marcus get down on one knee for Lacy? Would Robert and Sarah stay together? And would that raccoon find another conversation partner now that Clare has gone the way of those sea turtles returning to the ocean? Well, if you're in a region where football is king, you won't find out tonight. Lucky for you, I have access and will live blog the Bachelor in Paradise finale right here.

No need to thank me. Let us all curse the NFL powers (we'll be friends again on Sunday, I promise) that be together and get into all the drama on the Bachelor in Paradise final rose (or is it roses?).

Chris Harrison Lays Down The Law

When the episode opens, Chris comes to the happy couples and lays it on thick: There will be no new houseguests, but it's time to make a commitment or mosey on out of paradise. Everyone looks on it horror as if they didn't know this whole thing was only a three-week romantic tour. Pull those jaws back up off the floor. Y'all knew you'd have to face reality eventually, right?

AshLee & Graham To Insanity & Beyond?

Nope. Michelle Money finally breaks her silence and does her duty as Graham's longtime friend. She says what we've all been thinking ("AshLee is batshit crazy and will probably go all Swimfan on you if you don't get away now" — I'm paraphrasing.) Graham FINALLY wises up and kicks AshLee to the curb rather gently, he values his safety after all. He says it doesn't feel right anymore (when did it ever feel right, Mr. Pukesalot-At-Rose-Ceremonies?). AshLee turns it back on him and says that he wasn't honest with her sooner — though any woman with self-preservation abilities would have seen the writing on the vomit-covered-wall when Graham walked out on that rose ceremony, doncha think?

Needless to say, AshLee does not go home with a boyfriend, fiance, or friend with benefits.

Michelle's D-awwwww-ter Gives Her The Go-Ahead

Still wary about diving into a romantic relationship (even though she's been saying that's what she wanted all season), Michelle calls her daughter for an adorable moment. (Who knew anything actually cute would go down on this trashy treasure trove of a reality show?) Michelle is worried she'll screw up again by continuing to be with Cody, but her daughter simply says, "If you think he's nice and has a good personality that's all that matters." From the mouths of babes, everyone.

And Now It's Getting Serious

Chris reminds everyone who went home: basically, everyone except for Robert & Sarah, Marcus & Lacy, and Cody & Michelle are gone. And that's when things get serious. Or at least Bachelor-verse serious. It's time for overnight dates for the remaining duos. They can go on the dates (do whatever two attractive people sharing a bed might be wont to do) and afterwards, they will decide to stay together or break up. You know, test driving the car before purchase and all that jazz. (Don't believe that sparkly music, kids. This is definitely sexy time.)

Sarah Is So, So, So Excited For That Off-Brand Fantasy Suite

Despite almost breaking up with Robert last week for Brooks "Dad Jokes" Forrester, Sarah cannot wait to have an overnight date with her beau. But if past Bachelor experiences have taught us anything, the more excited someone is before the Fantasy Suite experience, the harder the fall. I sincerely hope it turns out well for Sarah. All cynicism aside, she seems genuinely sweet. Too bad reality TV tears the sweet and innocent apart like so many sheets of tissue paper.

Marcus & Lacy talk about how much they love each other — even ripping off that Jerry Maguire line "You complete me," but I'm guessing Tom Cruise would approve of their tan love. They're adorable, despite every fiber of my being telling me otherwise.

Cody & Michelle Are The Most Entertaining Couple Ever

On the flip side, Cody and Michelle enter their overnight date, but Michelle — ever the sassy surprise this season — promptly tells Cody "You know you're not getting laid tonight, right?" Of course, she wants to let him know she definitely thinks of him that way when she wonders aloud if the dick matches the biceps, if you catch my drift. Yeah, I can't believe it happened either. But here we are.

If there's one thing we can count on from Michelle Money, it's speaking like the rest of us salty broads on national television.

Scratch That: They Totally Boned

Apparently Michelle was just teasing, because after the date, she says she is "sore and satisfied" and he says he can "cross that off his bucket list." WTMI, yous twos. (And we were all worried about Nick saying "made love" on the After the Final Rose special?)

Once again, Sarah is worried about the lack of contact between her and Robert. Once, they went on a date and she was upset because he didn't kiss her soon enough. Now, it appears he didn't want to do as Olivia John recommended and get physical in the phantasy suite, and Sarah is not OK with that. Normally, I'd say not wanting to have sex with the person you're dating is a deal-breaker, but then I remember that these people also haven't known each other for that long. Robert has every right to take it slow, even if it's not exactly what Sarah is looking for.

Still, the couple comes to the conclusion that they aren't on the same page and they break up and head home separately. I'd make a joke, but I was actually hoping these two kids would figure it out. I know, I'm insane. Please direct your pointing and laughing elsewhere.

After their overnight dates, it's time for the remaining couples to gather before a tribunal of Bachelor and Bachelorette successes and hear their advice for happy coupling. They way they are seated, all in a row, it looks like they're about to watch a fight to death for the pleasure and delight of King Joffrey, but alas, they're just attempting to share relationship advice by asking ridiculously easy questions like "What's your favorite thing about your partner?" SNOOOOOOZE. At least ask a question these people can get wrong and make this, as Chris Harrison loves to say, the most. dramatic. finale. ever. Either that or a gladiator-style fight. I would accept that as well.

And The Final Roses... Freaking Finally

As expected, Cody gives his rose to Michelle. And then the other big (totally not predictable at all) thing happens...

In the end, Marcus finally got down on one knee and proposed to the object of his obsession, er, affection. We already pretty much knew Marcus & Lacy were engaged, but it wasn't clear if the Bachelor in Paradise format allowed for a proposal. But this is the land of Chris Harrison, where there is always time for some time on bended knee as long the couple is at least half-willing. So here we stand, at the end of our journey through the Barefoot-Wine-tinged waters of Tulum, Mexico.

We learn that Graham is single and living without Instagram (presumably to avoid any future AshLees); Chris & Elise broke up after two weeks (typical); Robert still wears jeans in bed (apparently, this is what upset Sarah); Sarah is single as is Michelle K, who had a Bachelor producer jump off a balcony for her; Cody & Michelle are still making out all over the place; the chatty raccoon is awaiting single lady Clare's call; and Lacy is moving to Dallas to be with Marcus. Aww.

This information floods in after we watch Marcus & Lacy sail off into the sunset, so to speak, like the ridiculously tan real life Disney characters they are... just as we knew they would.

Th-th-that's all, folks. Er, I mean, And they all lived happily ever after. I guess.