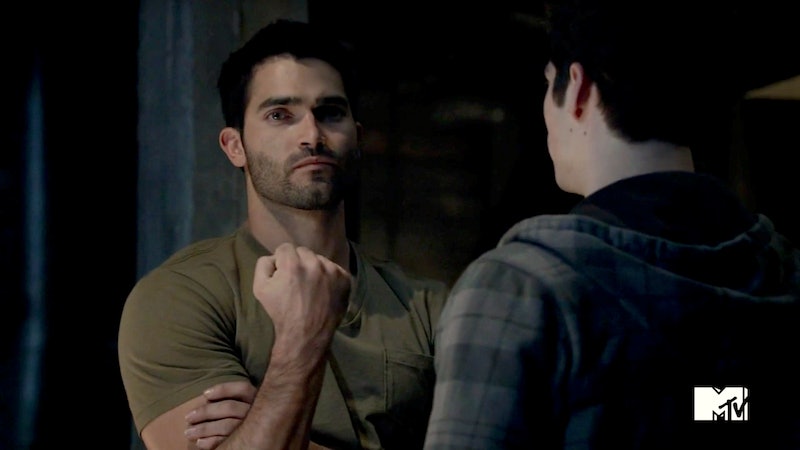 Teen Wolf finally showed us a fate we had been dreading, and then took it away in arguably the weirdest twist the show has ever given its viewers. After losing his powers thanks to a still-mysterious plan by Kate Argent, aka la loba, and finding out that his name was a cypher code for one of the Benefactor's lists, which pretty much guaranteed that he would die, Derek looked to be dead in Teen Wolf 's season four finale. But we were oh so very wrong, as it turns out Derek was evolving into a stronger wolf than ever before. That's right, even stronger than when he was an alpha.

At the start of the season four finale, the wolf pack went searching for Scott and Kira after Dr. Deaton and Lydia told them that Kate took the alpha and his girlfriend to Mexico for some kind of dastardly deed. Obviously only the audience knew at the time that Kate had turned Scott into a berserker. So the pack journeyed to Mexico alongside Peter Hale (stupidly enough), who told them that fighting a berserker wasn't about staying alive, it was about killing. That line finally revealed what Peter and Kate had been planning all along: They were hoping for Scott's friends to kill him, so that the reveal that he was the berserker they killed would ruin their spirits for good.

However, after getting into a few military-issued vans and helping teach Liam how to control his shifts in the full moon with the help of Stiles and the Buddhist mantra adopted by the bitten-not-born pack, Derek rushed out of the van hoping to charge the church where Kate was housing Scott and Kira.

Unfortunately, the beserker was waiting for them and attacked, beating Derek into a pulp and stabbing him with the sharp blade on its arm. It's unclear if the beserker that attacked Derek was Scott or perhaps another person trapped by Kate earlier this season (maybe Danny?) but it turns out the blow actually helped Derek become stronger. He somehow gained the strength to turn himself into an actual wolf and attacked Kate during the siege on the church where she had taken Scott prisoner. He even destroyed a berserker by crushing its head.

Before he ventured to Mexico with his pack, Derek revealed to Braeden that he knew he would not make it out of the trip alive, but she wouldn't have it. Thankfully Braeden was right, however what exactly Derek's evolution will bring is a mystery I can't wait to see more of in season five.