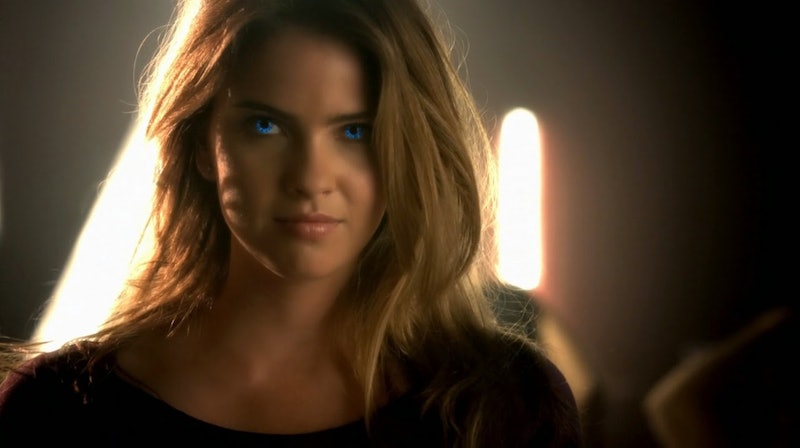 There were many, many questions left unanswered by the Teen Wolf Season 4 finale, but the one that really leaves me hanging is the only one that was resurrected by the finale episode itself: Who is The Desert Wolf? Here's what we know so far about this mysterious creature. According to Peter, "desert wolf" was the only thing he remembered about Malia's mom, but Peter didn't know who she was because his sister Talia took away his memories of her. However, he then told Malia that he had been researching the identity of her mother and that if she killed Kate, she would get to know her mother's identity. So who can believe anything Peter says? We also know now that Braeden has spent "too long" looking for the creature with the codename "Desert Wolf." And Malia realized that the "desert wolf" is a coyote. So who is she and why is she causing so many problems?

It seems like this "Desert Wolf" is prone to cause more trouble than anything else. Why else would Talia Hale deem it necessary to remove any memories Peter had of her? Plus, if she made the conscious choice to have any kind of romantic relationship with Peter Hale, there is something seriously wrong with this woman. So who is she? I have a few theories, some more reasonable than others.

I genuinely hope Kate is not the desert wolf, as that would give her way too many titles including "la loba" and werejaguar. But it's possible that Peter realized he seduced his nephew's ex-girlfriend who is certifiably psychotic. Maybe that's why he wanted Malia to kill her. So that she would never be a threat to him or his family again. When it looked like Derek had died thanks to a berserker attack, Peter looked genuinely distraught. So I think despite his evil nature, Peter still wants to protect his family.

This theory is gross but could be possible thanks to Teen Wolf's history of crazy moments. What if Malia is actually a younger version of herself? Remember when Kate aged Derek backwards to start her dastardly plans in the first episode of Season 4? Perhaps someone, maybe Talia, turned Malia into her child's self and put her in an adoption service, which placed her with the Tate's. Maybe Peter wanted Malia to kill Kate because he believed that Kate dying would lead to the power over Malia being broken, letting her revert back to her proper age. Ew. It's disgusting just thinking about it.

Or it's someone new. Not everyone on Teen Wolf needs to have a deep, dark past and not everyone needs to be resurrected. I wouldn't mind seeing some more fresh blood in Season 5.