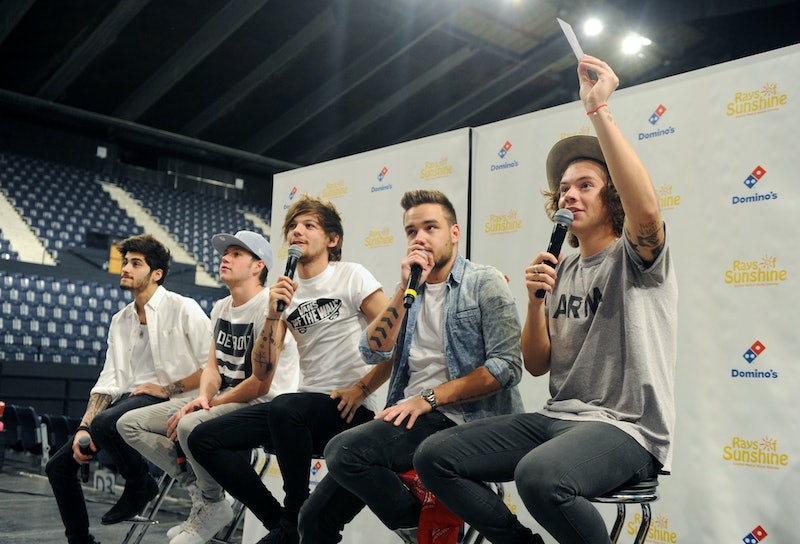 Monday was an exciting day for the One Direction fandom. To be fair, every day is an exciting day for the One Direction fandom because they seem to invent their own 1D themed holidays to then trend the name of it on Twitter, but this time the band gave their fans a surprise. On Monday, One Direction released an album title and a single out into the world, a single you could download for free off their website. The single is called "Fireproof" and it's the first one off their upcoming album Four, which is going to be a mix of sounds that all the boys are eager to say they're very excited about. You know what I'm very excited about now that I've had the song on repeat for far longer than I'm willing to admit? The "Fireproof" music video.

To be fair, One Direction's music videos are always a hit or a miss for me. I mean, I loved "Best Song Ever" and "Story of My Life" but what the hell was "You & I"? I'm still trying to pretend that video never happened, to be honest, no matter how great Niall Horan looked in it. Listen, 1D, I don't mean to tell you how to run your career, but "Fireproof" is such a good song that it deserves a good music video. If you want to make it as amazing as some of your other ones, here are some things it's got to have.

I don't care what anyone says. "Best Song Ever" was the best music video to date and it's not just because Zayn Malik was in drag. The band all dressed up in costumes, some of which you literally couldn't recognize them in, and it had nothing to do with the song at all in the best kind of way. Please do more of that.

"Fireproof" is kind of a slow, reflective jam, so if you guys want to put some more pictures of you as children in the music video for it then I will not complain. Ever. At all. Find a way to work it in.

3. Harry Styles and a Girl

Styles sweats charm and breathes charisma, guys. Use that. Use it. Put any woman within five feet of Styles and you will have every girl watching wishing desperately that they could be that girl. And I am not just saying that as a girl who has watched this section of the "What Makes You Beautiful" video way too many times.

4. That Guy From the Perfume Commercial

Why waste him on a commercial for a perfume I'm not going to buy when you could put him in a music video? He can direct the music video!

Because he's my favorite, okay?

Okay, so "One Way or Another (Teenage Kicks)" isn't really an official-official song. However, the self-made music video the band put out was awesome and funny and just so, so good. If they want to kick the fan participation up a notch by involving people in the filming of an official video like the one for "Fireproof", I doubt they'll be short of volunteers. (Cough, me, cough.)