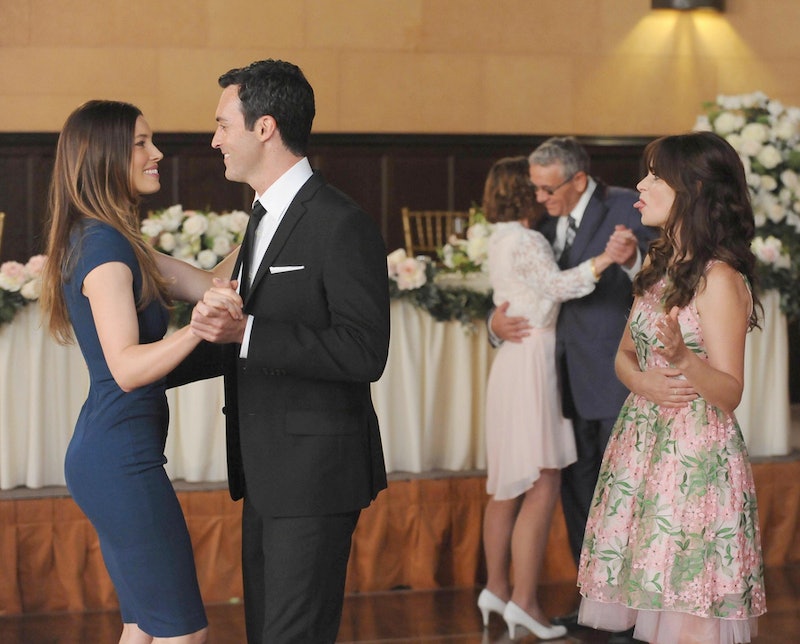 The countdown has almost come to an end, everybody! On Tuesday, Sept. 16, New Girl Season 4 will premiere and the missing piece of my heart that I've been struggling to survive without all summer will finally be put back into place. It's time for the return of the Douchebag Jar, Schmidt's quippy one-liners, and all of the adorably quirky fashion inspiration we will ever need. Unfortunately, there's one thing it is not time for: Nick and Jess adorableness. I still maintain that they will end up together eventually, but for now, they need to grow as separate people and this means that Jess has to strike out on her own for a bit.

Yup, Jess is single, but she won't be staying single for long. This girl is ready to mingle, and for her, that means playing the field — inevitably with a high instance of hilariously zany mishaps sprinkled throughout. New Girl has quite a few potential love interests on deck for Jess, and obviously, none of them will be as awesome as Nick Miller, but I'm keeping an open mind. Maybe I'll fall in love with them when Jess does.

So let's examine our guys, shall we? In the season premiere, Jess will be vying for the attention of the best man at a wedding she and the rest of the gang are attending, but her competition is Kat, played by Jessica Biel. Not that we need to worry about Jess coming out on top this time, because TVLine reveals that later in the season, Schmidt will be helping her navigate the world of online dating. This is especially exciting, because I'm hoping that means he'll be convincing Jess to create her own The Hills-themed dating profile trailer, although there's no way it will ever top Schmidt's.

And one of the guys Jess meets will be sticking around, but we won't meet him until October. Once Upon a Time's Julian Morris has signed on for a recurring role as Jess' love interest, who Entertainment Weekly describes as a "distractingly handsome" teacher — one who replaces Jess now that she's vice principal. This puts Jess in a sticky position, since she's his boss, and comedy obviously ensues. Considering the fact that Morris is actually super adorable, it might be fun to see this relationship play out. Also cast as one of Jess' beaus is Alan Ritchson, who Jess meets at the bar, as reported by TVLine.

But no matter what kind of love Jess finds this season, I'm pretty sure that it's going to lead her back to Nick. Maybe in the season finale. Maybe in the series finale. But they will get back together eventually, I promise you. And if they don't? Let's just say Fox is going to get a letter that will require me to deposit quite a significant chunk of my savings into the Douchebag Jar.