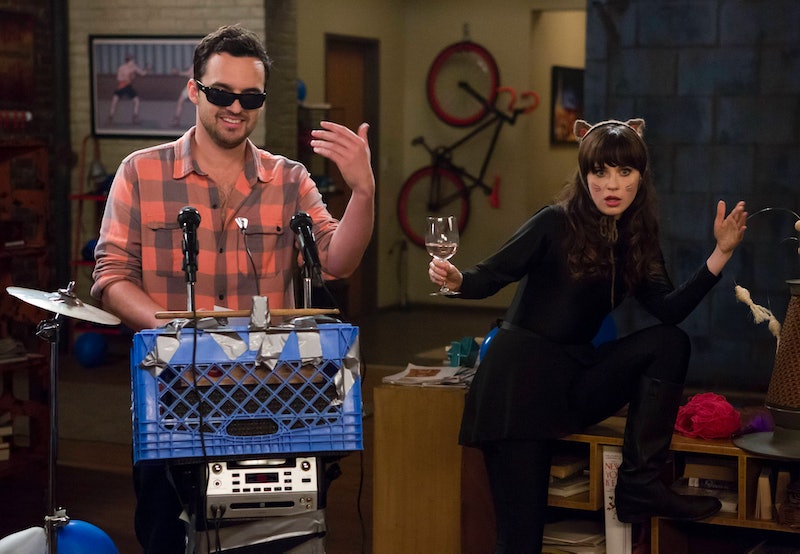 Oh those kooky sitcom kids. Jess and Nick's breakup on New Girl ripped our little hearts out in Season 3 (even if we saw it coming), so what's in store for this couple — who are clearly still into each other — in Season 4? Unfortunately, it doesn't seem like they will be reuniting as anything more than friends for now. In an interview with Entertainment Weekly, Zooey Deschanel said, "The best thing about these characters is that they’re so great when they’re at odds. Having conflict with them is good, and having them always being in love with each other but never really being able to get it together [offers] so many possibilities." Great. Just great. So we're going to have to be tormented because of all the possibilities them not being together offers? In the words of Schmidt, don't pretend to know my pain, Deschanel!

They are both hot messes — which makes them hysterical from a sitcom perspective — but not really believable as having any sort of functioning relationship. I’m the type of person who gets super worked up over TV romances and I really should know better than that. I think about how if I was going through this relationship, how impossible it would be to get back together with so much baggage and hurt feelings. (Damn you, Peter from Fringe and Ross from Friends!)

But it was refreshing to see Nick and Jess openly discuss the potential of dating other people in the Season 3 finale. I mean, they’re not only friends, but roommates. There is no way they aren't going to see each other dating "hunks" and "ho bags." And Jess was already getting weird about the captain hitting on Nick in "Cruise," so the discussion had to be had.

Their talk about dating other people on the cruise ship most likely means we'll be seeing that go down in Season 4. I don't approve of it, but hoorah for at least giving them a couple episodes of closure. Rage fills my veins when sitcoms have their beloved characters get together, break up, and then move on almost immediately (damn you, Danny and Mindy! At least you’re back together... for now). One episode does not a full recovery from a breakup make.

So, I’m hoping Season 4 focuses on the growth of these two characters — pretty much just so they can get back together by Season 5 or 6 (because they are going to get back together, dammit!).

I mean, of course, they’ll never truly become “adults” — and I’m fine with that. Their childlike wonder (even Nick! although he's more like a grumpy old man-child), naivety, and dependence on booze to get them through emotional hardships are what makes the pair so endearing.

But c'mon Nick and Jess, get your shit together! Don't stomp on each other this season as you try out new loves. And when you do get back together, no more hangover breakups (although I feel you on the emotional hangovers, homegirl). My heart just can't take it.