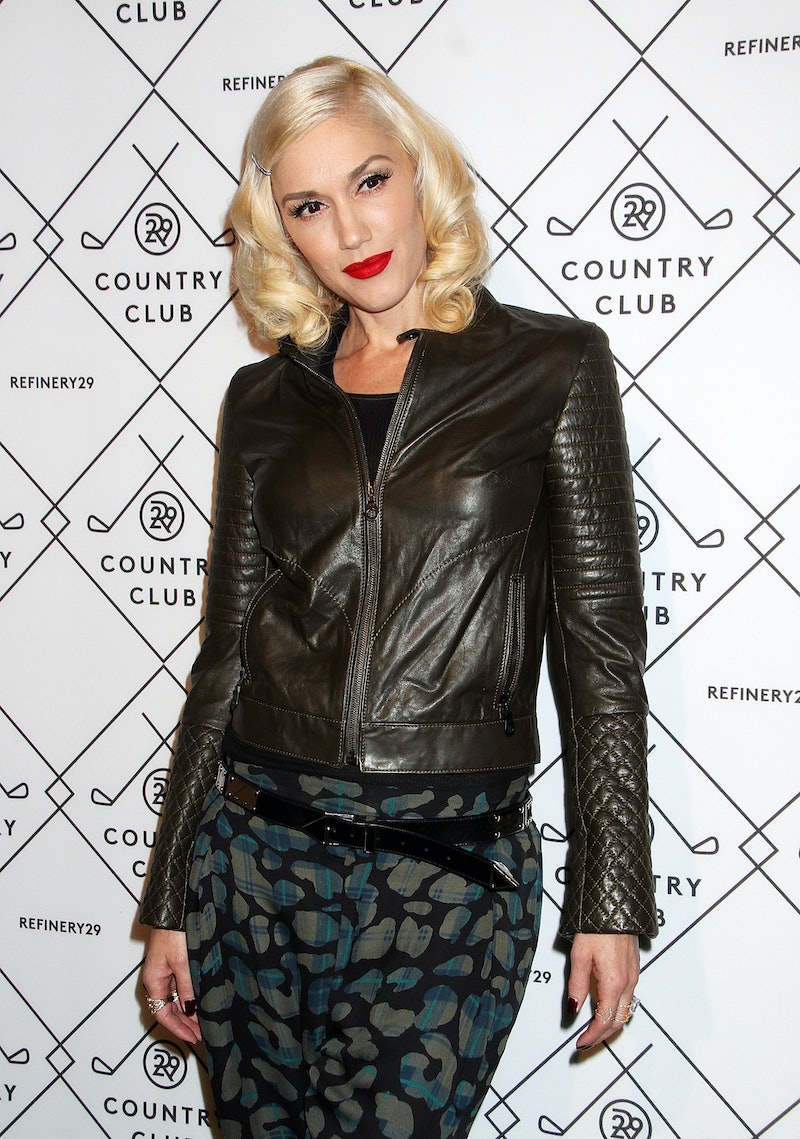 It's official: Gwen Stefani is recording new music. In fact, she told MTV during a recent New York Fashion Week (NYFW) interview, "Right now, I'm all about doing music." I can't tell you how long I've been waiting to hear those wonderful words come out of her mouth! When asked if she's planning on making a new No Doubt album or a new solo album, she responded:

You know what, at this point, I'm thinking about both. I can do both. It's just an amazing time, so many opportunities. I'm going into the studio tonight with Pharrell [Williams]. I'm going to be writing and also just seeing what comes along my way.

As if that weren't enough, Stefani also said that she's already recorded "a few things"! Needless to say, I've reached a dangerous, Jessie Spano-on-caffeine-pills level of excitement here. Now, there have been hints throughout the spring and summer about Stefani's big solo comeback (namely, her surprise cameo during Pharrell Williams' set at Coachella, the announcement of her new coaching gig on the upcoming season of The Voice, and a telling comment from music producer Diplo), but as far as I can tell, this is the first time that she's actually confirmed the news herself.

Stefani has released two solo albums during her career: 2004's Love. Angel. Music. Baby. and 2006's The Sweet Escape. She worked on both projects with famed music producer Pharrell, and apparently, the two artists are teaming up once again. MTV also caught up with Pharrell at NYFW, and this is what he had to say about the new music that Stefani's cooked up so far:

You gotta hear this new Gwen record. It's crazy [...] and she is killing it. When I tell you she's killing it, it's another level. Gwen is somewhere else, man. The last time I said this about Miley, everybody was like, "What? That's Hannah Montana!" And I'm like, I'm trying to tell you...

Whoa. That's high praise! Granted, I'm not so sure that the Miley Cyrus comparison was the right way to go, especially when you consider that Stefani already has two successful solo albums under her belt, and before Bangerz, Cyrus probably really was best-known for playing Hannah Montana — but I'll let it slide. Bottom line: If Pharrell's excited about Stefani's new music, I'm excited about Stefani's new music. I mean, he helped create her number-one smash hit "Hollaback Girl"! I trust his judgement. Check out both Stefani and Pharrell's interviews below.

If you're a big Stefani fan, be sure to check out her fantastic new Maroon 5 collaboration, "My Heart Is Open." It should make the wait for her new solo material a little less agonizing. My fingers are crossed that we'll get to hear at least one new song from Stefani before the upcoming season of The Voice is over.