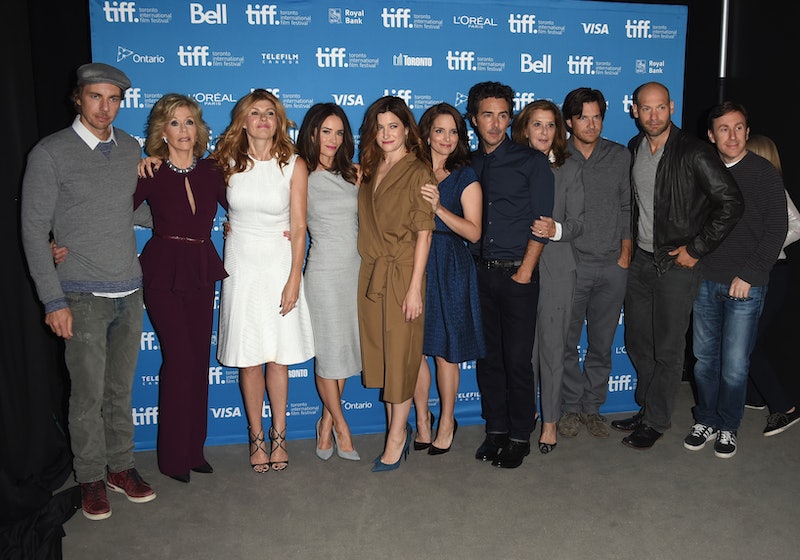 Chances are your Instagram feed has been flooded with photos of your favorite celebs posing on red carpets at an event called TIFF. If you're unfamiliar with the acronym (hey, I didn't know what it meant at first either), it stands for the Toronto International Film Festival — an annual event that's currently taking place in Canada. From Sept. 4-14, films will be screened at "the leading public film festival in the world," as their website says. Basically it's pretty much any movie lover's dream come true.

At the festival, there's something for everyone. Do you want to see Channing Tatum as a wrestler? (Duh. Is that even a real question?) What about Tina Fey and Adam Driver in the same movie? Wish granted. Bill Murray and Melissa McCarthy team up, too. It's also promising that the most anticipated films star some of Hollywood's favorite females. From Anna Kendrick to Jennifer Aniston to Kristen Wiig, the ladies are landing leading roles and this is such great news. It proves women can carry a movie just as well as their male counterparts. (Just in case not everyone knew that already.)

If you're wondering about exactly what's in store, here's a mash-up of all of the movie trailers. But just a warning: it will make you want to see all of these movies immediately.

Since that video doesn't quite tell us what actually happens in the movies, here's a round-up of all of the TIFF films you should know about.

Cake is already generating Oscar buzz for Aniston. Even co-star Anna Kendrick had nothing but compliments. She said, "While we were making the movie I just wanted to shout from the rooftops how incredible she was on set, and what an extraordinary performance she was giving. She just brought it every day."

The movie is about a woman (Aniston) in chronic pain. Kendrick plays a member of her support group. The movie hasn't been purchased yet, but if it's picked up at the festival, Aniston may have a chance at competing in the Oscar race.

Not only is she in Cake, but she's also starring in The Last Five Years . This is a switch from her usual roles, since it's more serious. The movie musical, based on an off-Broadway play, comes out on Valentine's Day. It's about the relationship between a struggling actress (Kendrick) and a novelist (Jeremy Jordan). The two reflect on their time together from very different view points.

Based on a book with the same name, This Is Where I Leave You stars Jane Fonda, Tina Fey, Adam Driver, Jason Bateman, and more. The cast alone should convince you to check it out, but here's a synopsis anyway: the death of their father brings together four siblings for a week of mourning and bonding.

Channing Tatum as a wrestler

Tatum stars with Mark Ruffalo in Foxcatcher . They're brothers who were once successful wrestlers. Steve Carell is in the film too, as a "neurotic billionaire." The dynamic between these three is sure to be fascinating. It's directed by Bennett Miller, known for Moneyball and Capote.

Two roles for for Reese

In The Good Lie , Reese Witherspoon helps four refugees from Sudan's Civil War. It's definitely a far cry from her days as Elle Woods, but from the sound of it, this flick is worth checking out.

She's also starring in Wild , where she plays "a self-destructive woman [who] attempts to leave behind her years of drug abuse and reckless sex with a solo, 1,000-mile hike along the Pacific Crest Trail." The film is based on Cheryl Strayed’s memoir.

Um, what could be better than a movie starring two of the funniest human beings around? In St. Vincent , Murray becomes an unexpected mentor for McCarthy's character's 12-year-old son. Oh, and Naomi Watts is cast as a pregnant, Russian prostitute. Apparently she's a scene-stealer — but anyone could've predicted that, right?

A new side to Kristen Wiig

The standard role for Wiig is the funny girl, but in Welcome to Me , she plays Alice, a woman with borderline personality disorder. She wins the lottery and tries to get her own talk show, along with help from a TV producer played by James Marsden. This movie also has a female director, Shira Piven.

A favorite funny guy plus everyone's dream guy? Sounds like a perfect pair. Sandler and Elgort star in Men, Women, & Children along with Jennifer Garner and Judy Greer (aka former co-stars in 13 Going on 30). The movie focuses on teens and their parents and the Internet. Basically, it's about how life online has impacted real life.

The young actress has not one, not two, but three movies showing in the festival. There's Laggies with Keira Knightley, The Equalizer with Denzel Washington, and Clouds of Sils Maria with Kristen Stewart. Jeez, this 17-year-old is killing it, huh?

Now we'll have to see which of these films make it out of the festival and on to big screens around the world.