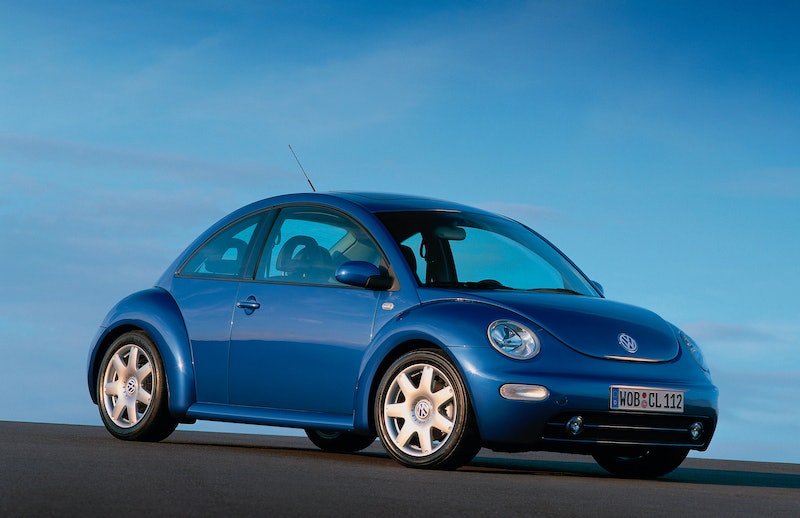 Remember how the modernized Volkswagen Beetle was essentially the coolest automobile on the face of the planet from about 1998 to 2004? I thought these little retro hot rods were so awesome, I even had a see-through plastic purse with little VW bugs printed all over it. Just imagine the compliments I got! Along with many other members of the teen population at the turn of the 21st Century, pop culture made the New Beetle my early 2000s dream car. Let that be a lesson to all: never take the value of rigorous product placement on a young and impressionable mind for granted.

Oh yeah, not-so-subliminal advertising worked like a charm when the second coming of the Volkswagen Beetle debuted in the late '90s. Those marathon games of punch buggy seemed like they would never end. The New Beetle made appearances in movies, TV shows and music videos, leaving your arms and knuckles sore from overuse and your eyes wide with desire. From Mandy Moore's first music video "Candy" to Bring It On, this car was driven everywhere by cool young people caught up in the splendor of being cool young people. Plus, it came with a free built in flower vase. MARKETING!

Because no day is complete without a dash of nostalgia, let's take a look back at the time when the New Beetle was everywhere in pop culture.

Cargo pants and green punch buggies go together like peanut butter and chocolate.

A*Teens "Upside Down (Bouncing Off the Ceiling)" Music Video, 2000

The Swedish ABBA cover band the A*Teens was laying on the retro-futurustic pastiche thick in this video.

Not sure who's driving all these middle schoolers to this unchaperoned party, but they're going in style!

Blink and you might miss it, but a yellow punch buggy pops up during the car chase scene in this music video. We see you right behind those two drag racing BMW roadsters, little guy!

Well, of course SoCal cheerleaders in 2000 drive cars like this.

Sure, this isn't the titular car that Seann William Scott and Ashton Kutcher lost in the movie. However, it does indeed show up. Boom. Cultural artifact.

I'm not saying that everyone wanted a robin's egg blue convertible bug in 2004, but a helluva lot of kids did.

There ya' have it, folks. The ultimate aspirational possession of the early aughts, along with a color-customized iMac and an inflatable couch.