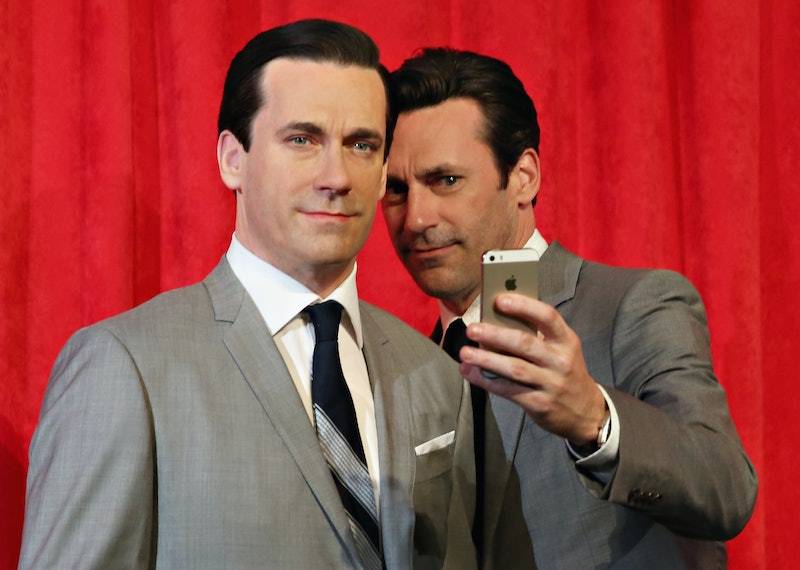 The life of a handsome man is a beautiful thing. You know it, I know it, and yes, handsome men know it. This week, our obsession with handsome men led us to a study conducted at the Centre for Evolutionary Biology at the University of Australia in Crawley, which found that, surprisingly, attractive men have lower-quality semen than more average-looking men. As Bustle explained Monday,

In the end, the researchers found that male facial attractiveness did predict male semen quality. A more masculine face (ie wider, strong jaw) was found to correlate with poorer semen quality than more feminine-faced men. Therefore, male facial cues could signal male fertility. A wider and more masculine face tends to be associated with higher testosterone levels, which could explain the findings of the study, because higher testosterone levels are thought to have negative effects on sperm.

However, this isn’t to say that your future dream beau will have fertility problems. The women who were asked to rate the attractiveness of the photos actually preferred the men with healthier sperm, because women who are looking for long term mates tend to select men with more feminine faces.

Oh, the cruel irony. What else don't we know about the handsome men ( both real and imaginary) in our lives? Here's what science "knows" about the elusive breed.

handsome men are more likely to be better athletes

Swiss evolutionary biologist Erik Posma devised a study to confirm what you already knew from spying on lacrosse practice in high school: Many of the world's most athletic men are also considered great-looking.

Posma had heterosexual women look at pictures of men who competed in the Tour de France, and rate them on their looks. He found that racers who were in the 90th percentile of competitors were rated as 25 percent more attractive by women in his study than racers in the race’s 10th percentile. However, there isn’t a direct correlation between having the best looks and being the best athlete — Posma reported that “The most attractive rider finished somewhere in the middle of the pack.”

Handsome men are generally healthier overall than average-looking men, with lower incidences of everything from high blood pressure, high cholesterol, and asthma to depression, and even tinnitus. Scientists say the results can be credited to the “good genes” coursing through their veins, not to mention, the generally cushier life they enjoy. (We'll get to that in a minute.)

... Or At least they're perceived as Healthier

The facial symmetry of handsome men makes them appear healthier to test subjects, no matter their actual physical health. So on top of everything else, handsome guys get to mainline as many Doritos Tacos Locos as they want, and still get to be viewed as someone who works out.

In a study that followed 900 adolescents from their teens through their 30s, good-looking people were found to have higher GPAs. (Which could be explained by the fact that the study also found they receive more attention from teachers and more friendship from classmates.) So, yes, science has finally confirmed that high school was really unfair.

Good-looking men land jobs more easily than their homelier counterparts; and to really twist the knife, they are viewed as more competent on the job, too.

... And make more money at them, of course

Handsome men make 13 percent more money over a lifetime than other men, possibly because no one can say no to that face.

The workplace is not all just free money and jobs falling from the sky for handsome dudes. Researchers Rick K. Wilson and Catherine C. Eckel investigated the long-held truism that attractive people are considered more trustworthy than us normals.

They devised a lab game where test subjects "paid" other test subjects based on how much they trusted and expected of them. Initially, hotter subjects were paid more. But eventually, many of them got slapped with what researchers called "the beauty penalty" — when beautiful people failed to live up to the high expectations that others had placed on them, solely based on their looks, they were docked pay and considered even less trusty-worthy than average-looking people who behaved in the same way.

Handsome men are NOT MORE LIKELY TO CHEAT

... but they are actually Less likely to believe women are interested in them

That sounds totally wrong, right? But actually, according to a psychology study conducted at the University of Texas, Austin, average-looking men tend to overestimate women’s interest in them (as well as their own attractiveness), while handsome men actually tend to underestimate women’s interest in them. The researchers in the study believed that the overconfidence of the average-looking men was possibly an evolutionary adaptation, allowing the Jonah Hills of the world to get out there and look for partners with the confidence of a Channing Tatum.

Yes, life's not entirely a fairytale for handsome dudes: Women who are already in relationships tend to not notice them, their wives tend to cheat on them with less handsome men, and in general, they (along with regular-looking dudes) give up trying to look good altogether at age 46.

Still, it's gotta be mighty comfy in that bubble.