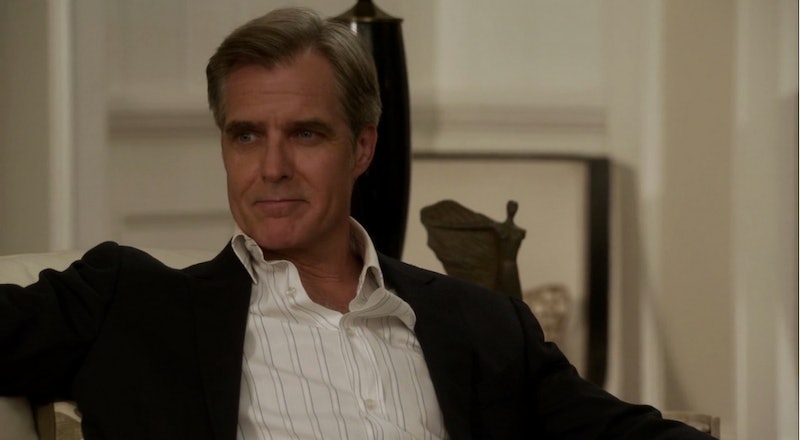 The revengenda continues. Victoria Grayson might be coming for Emily Thorne, but that doesn't mean anyone else in the Hamptons is safe. Revenge Season 4 premieres on Sept. 28 and fans have already been promised their first big death. E! Online revealed a Revenge Season 4 spoiler that a man close to Conrad Grayson will die and his death will shake the Hamptons, but don't worry Daniel Grayson fans (are there any of you out there?) because he's totally safe. So, who the heck could this nameless guy be and why will the residents of the Hamptons be so concerned with his death?

E! Online's Spoiler Chat revealed to an inquiring Revenge fan that "a pretty important figure in the Hamptons," who's connected to Conrad, will kick the bucket in Season 4. And people aren't going to just let him die — according to the spoiler, there will be "mysterious circumstances" surrounding his death and the residents of the Hamptons will want answers before they let this poor man rest. I feel their pain, the spoiler itself is so mysterious that it prompts me to wonder several things about Season 4.

Toward the end of Season 3, Revenge seemed to want to make one thing perfectly clear to fans — every character on this series is capable of murder. Conrad organized Pascal's death, Victoria killed Aiden, Patrick killed his father (and Victoria's rapist) Jimmy, Daniel tried to kill Emily, and David Clarke apparently killed Conrad. At least, that's what it looked like in the final moments of the Season 3 finale. So, this new spoiler shouldn't surprise anyone — I mean, of course someone will die on Revenge Season 4 and of course that person will be related to one of the series regulars but not be a series regular themselves. Look at all of the people who died last season? None were series regulars, but they were all integral to the storyline.

So, who could this guy be?

Considering he's not a series regular, yet someone with ties to Conrad, it's definitely possible that we haven't met him yet. I mean, Conrad's not a man with many friends — considering he sometimes has his "friends" chopped up by helicopters because they're in love with his ex-wife. And, aside from Pascal, we haven't met any of Conrad's comrades (ha) — at least none worth remembering — in a very long time. The good news there is that we won't be extremely attached to this guy before he ends up floating in the bay or bleeding out on a dark road.

Who could do this?

Basically, "anyone" is the right answer to that question. But I'm going to put my money on Victoria or David Clarke. I know, Victoria's locked away in an asylum crying Amanda Clarke right now, but she's going to get out at some point. (How else would she be "coming for" Emily?) It's also only a matter of time before she realizes Conrad's hand in Pascal's death and, well, there's also the fact that Victoria totally hates Conrad's guts. Does she need any more of a motive than that to kill someone with ties to him? But, while her suffocating Aiden was a pretty sneaky move, the "mysterious" nature of this unnamed man's death seems to be more of a David Clarke signature move. I mean, what's more mysterious than being killed by an actual ghost. Killing a man and leaving behind his DNA would be the mystery like the Hamptons has never seen — David Clarke is dead, how the hell is he killing people? Boom.

Does this mean Conrad's alive?

This might be the biggest reveal of all from E!'s spoiler — Conrad might actually have survived getting stabbed in the Season 3 finale. Damn, Henry Czerny is good. Why would it matter if this unnamed man had ties to Conrad Grayson if Conrad is dead as a doornail when Season 4 premieres? I'm under the impression that David Clarke isn't on a rampage and just killing people because Conrad once breathed the same air as them. He spent the past 20 years laying low and biding his time for the perfect moment, that's not someone who just kills people without a reason. For this guy's death to be that important, Conrad's going to have to be alive in Revenge Season 4 and that's that.