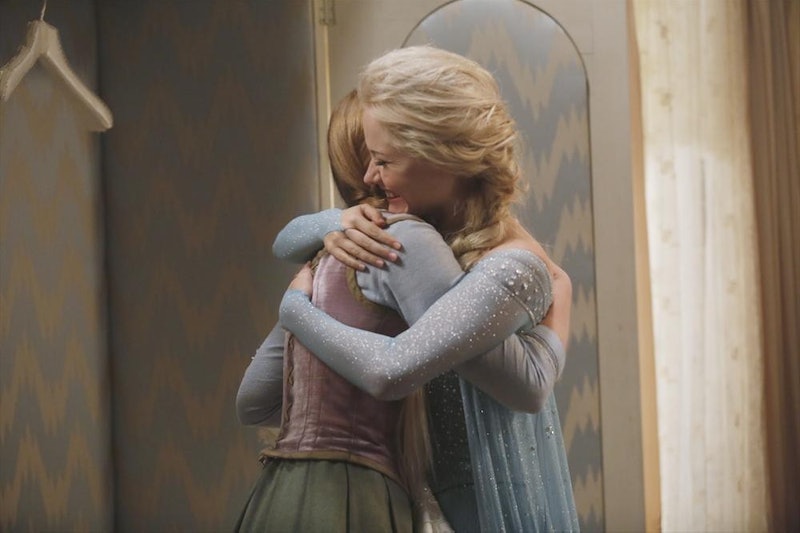 Frozen. Long exasperated sigh. I know, I know. Another day, another 900 words about Frozen this and Frozen that. But listen, if the internet had been around when Star Wars came out, you can bet that everything would have been about Luke and Leia, OK? Can you imagine the tweets that would have happened during the initial broadcast of the Star Wars Christmas Special? It was the fandom du jour back then, and right now everything is about Frozen. Its pandemonium will be taken up a notch when a Frozen storyline is introduced on Once Upon A Time.

In saying that, there's one thing that's been bothering me all summer and I think it's kind of important to the upcoming OUAT season: Has Emma seen Frozen? It's a legitimate question. When Elsa and Anna are introduced, will the show treat them as characters from the multi-million dollar movie, or as brand new, never before seen princesses? How will the TV show address the movie? Will the TV show address the movie?

We know that in the world of OUAT, Disney movies exist. Neal at one point tells Mulan that her movie is pretty good (R.I.P. Bae). Emma tells Hook that in his movie he's got a bad perm. Heck, when the Wicked Witch shows up, everyone starts cracking Kansas jokes. So will Emma acknowledge that the Oscar-winning Frozen is the fifth highest grossing movie of all time, single highest grossing animated film of all time, and Billboard 200 chart topper? Or, will OUAT take the more awkward route and pretend that none of that has ever happened?

Timeline-wise, Frozen is out in the OUAT realm. Sure, we jumped a year into the future for Season 3B, so that means "Let It Go" is currently in heavy rotation on the radio. Even if you're going to try and convince me that Storybrooke is completely cut off from the real world, Emma is at some point going to open up Firefox and be blasted with a bunch of adults lip-synching "Love Is An Open Door." I refuse to believe Rumpelstiltskin has a spell that blocks YouTube. If OUAT wants me to think that everything happening on the show is real, then they are going to need to crack at least one Adele Dazeem joke. They've managed to tiptoe around other Disney movies for three seasons now, but there's no way they can do it with Frozen. They have to address the giant Olaf in the room.

I'm not suggesting a bottle episode where we see everyone lined up for the midnight premiere of Frozen — wait a second. Correct me if I'm wrong, but they've never mentioned a Storybrooke movie theater. This is odd. If the town is big enough to support its own hospital, then it is certainly big enough to offer matinee showings of Guardians of the Galaxy (synergy!). No, these characters don't necessarily need to binge 50 years of Disney movies in one sitting, but Frozen's kind of a big deal right now. Or are they just going to pretend that Regina's latest curse leaves a big, gaping, Frozen-sized hole in everyone's memory?

So they have one of two options: either Frozen's a movie, or it's not. From the promo released earlier this week, it looks like OUAT is going to take the latter route: we see Elsa tell someone (Regina?) that she's "the queen." If everyone had already seen Frozen, this would be a non-issue. Oh, Elsa's here, break out the coronation gowns! But since she has to explain to someone who she is, that makes me think that no one has ever heard of their story before. Maybe "The Snow Queen" is in Henry's fairytale book, but do you think Elsa & Co. will get a footnote? Don't you think Henry's going to casually ask, "Hey, where is that adorable talking snowman that kind of sounds like Elder Arnold?"

Considering that the Frozen storyline seems to pick up immediately after the events of the movie, someone has to reference their story, whether in the big ol' book of fairytales, or at the nearest AMC theater. They're not starting the sisters' story from scratch (considering there's a potential Anna and Kristoff wedding) like the rest of the characters on the show. We need to know how they got their backstory one way or another. Even though we've all seen Frozen, it's lazy storytelling to assume that we've all seen Frozen. Honestly, I would LOVE to see the show address the movie, straight up, as a movie. Is that breaking the Fourth Wall? Is that like a dimension further, and would be breaking the Fifth Wall? What happens if Emma is none too pleased for the arrival of Elsa, only because she can't stop humming "Fixer Upper" (that's what she sings to Hook, obviously).

In conclusion, Storybrooke needs a movie theater. Then this debate about Frozen as a movie on a TV show becomes a moot point. Of course everyone's seen Frozen. They've probably seen 22 Jump Street too.