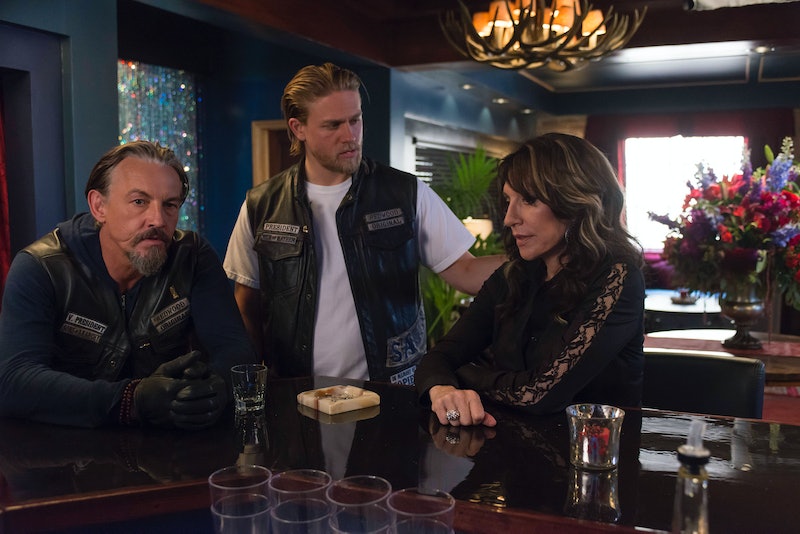 It's impossible to forget how brutally season six of Sons of Anarchy ended. Jax opened the episode talking about wanting to be a good man and keeping his center, only to lose the center of his universe, Tara, in the final moments of the episode. Of course, it's been a long time since SAMCRO and Jax rode the streets of Charming on our televisions, so while none of us are likely to forget what happened to Tara, the rest of the events overtaking the Tellers and Co. are likely to be a little bit fuzzy.

After all, the series is working with a cast roughly the size of a small village and from Jax to Tara to Wendy to the adorable pit bull Tig saved from a dog fight, there is no cast member whose involvement is only tangential. Every little piece of Kurt Sutter's world fits together to create the bigger picture, and if you miss one cog in the machine, you'll find yourself scratching your head when SOA season seven premieres on Tuesday night.

Lucky for you, I just rewatched the season six season finale and am all brushed up on where we last left Charming. Here's your quick refresher:

While Tara's demise is obviously the product of a huge misunderstanding and a handful of assumptions, Tara did help Gemma get to the final conclusion. After all, she was working with the DA, Patterson, to potentially rat on the club. When word made its way to Gemma, she went all Mama Bear. But not before Jax sacrificed everything for the woman he loved, out of his own sense of duty and fatherhood.

After making me think he was surely capable of killing Tara should she choose to rat — as the ATF agent feared — Jax did the honorable thing. He made up with Tara, told her he loved her and that all she needed to do was take care of their boys, and made a deal with the DA: He'd turn himself in and in exchange, Tara would be exonerated for Pamela Toric's murder and the club's gun-running charges disappear. They share one final, tender moment together, but Sutter isn't one to let happy moments stick around for long.

Nero is getting more and more involved with the Mayans, but before he jumps in headfirst, he offers Gemma an out: He wants her to come away with him. She refuses, which potentially ends their relationship.

To make matters worse, Unser tells Gemma about Jax's deal and makes sure to waggle his old finger at Tara — though the truth is that her son made the decision to save his family. Her drunken rage takes her right to Tara's house, where she finds the mother of her grandchildren milling about the house. It doesn't take long before Gemma fights with Tara and the brutal brawl ends with Tara dead, with a meat fork in her skull.

Moments after Gemma kills Tara, Eli rushes in to find them. But before Eli can react, Juice comes in behind him and shoots the officer, killing him too. Juice cleans up the crime scene so that Gemma won't be implicated, and they flee the scene before Jax returns to find the person he loves more than anything lifeless and limp on the floor. Juice was just doing what he thought was right, but the timing is pretty terrible for old Juicy. Not long after telling Nero that Jax ordered him to kill Darvany, Juice now obscures the truth of Jax's wife's murder. Not a great move.

He's cradling Tara's dead body when the police come to pick him up. This is where the episode leaves us: With Jax realizing that he gave up everything for Tara only to have her brutally ripped from him and his sons. Clearly, he's still going to prison, but when he gets out, it's undeniable that Jax will be on the warpath.