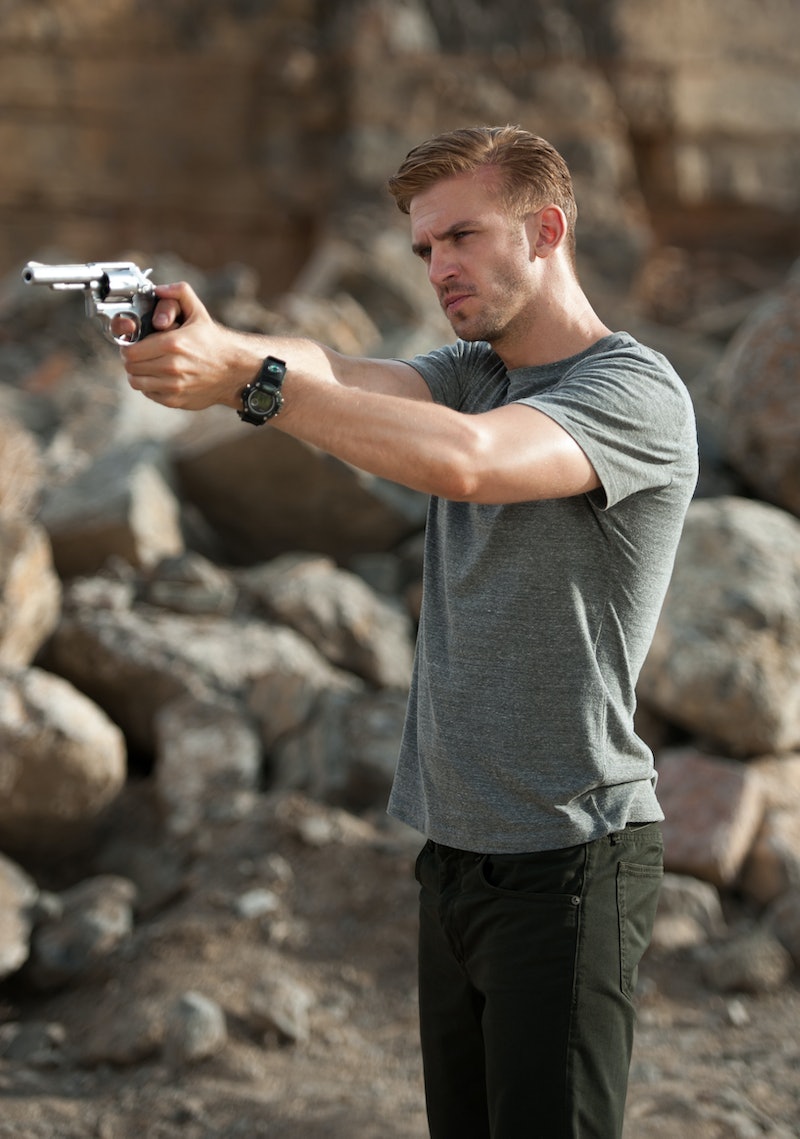 You might remember him as Matthew Crawley, the caring and courteous cousin of Lady Mary on PBS' mega-hit Downton Abbey. He won over British and American audiences alike with his soft charm, delicate wooing techniques and eternal love for upstairs' most eligible bachelorette. But when Dan Stevens' character was killed off in the Season 3 finale of the show, audiences were outraged to learn Dan Stevens departed to pursue acting in other avenues. But now, with Friday's release of The Guest, we will see the fruits of Stevens' absence. And never fear — for those who couldn't stand to see Cousin Matthew crushed to death by a milk truck, the actor is back with wicked vengeance in The Guest.

The film, directed by Adam Wingard follows Stevens as David, a soldier who introduces himself to the Peterson family, claiming to be a friend of their son who died as a solider overseas. He forms bonds with each member of the family in an eerily perfect way, and when a series of accidental deaths are linked to the mysterious soldier, David's motives are questioned. I spoke to Dan Stevens about tackling the role, his massive transformation into ex-soldier David, and more.

"When I came to the States and was looking to tackle different projects I couldn't have told you that a twisted action comedy would have been on my list," Stevens said in reference to the role.

Nevertheless, Stevens was immediately drawn to the script, a twisted slasher flick whose brutal death scenes might just make you laugh out loud. "I can't remember exactly what page it was, but I remember that I very, very quickly began to laugh out loud and couldn't stop until I finished," Stevens said. "Adam [Wingard] was very excited by the fact that I found it funny. There's a shared sense of humor that Adam and Simon [Barrett], the writer, and I have."

Stevens' David is very much a classic antihero, a regular baddie audiences can't help but root for. It's no coincidence that David is a charming Southern soldier with piercing blue eyes and sensual blonde stubble. We aren't just rooting for David, we might even want to date him. And when David comes to "fix" the family of his fallen-soldier friend, we are most intrigued by his relationship with 20-year-old Anna.

"Anna is David's biggest challenge within the family. He manages to help Luke, the son, out with the bullies, he cheers the mother up in her grief, helps the father in his work situation, albeit in a very twisted way, but Anna is the one that he had to work hard at to win round. It adds to the suspense of the movie, that will-they-won't-they element is key."

Fresh off the tails of a dramatic role that caused Stevens to lose about 30 lbs, beefing up for bulky David was no easy task. "It was a heavy physical transformation for me. I got really skinny for a role previously, so I promised Adam I would bulk up and get into the right kind of shape for David," Stevens said. "I wanted to look the part, and also feel the part. There was a lot of time spent at the gym, some martial arts training, weapons training, and that really fed into the psychology of the character, the esthetic, as well."

Those who have seen the trailer got a healthy glimpse of Stevens transformed physique. Immediately after the teaser's release, the interwebs were abuzz about the actor who once played Matthew Crawley's tanned and chiseled stomach. Dan Stevens' abs even has its own twitter account. See a clip of Stevens' shirtless transformation below:

But bulking up was only half the challenge, Stevens also took on many of his own stunts.

"I did as many as were sane and safe to do. We worked very hard at choreographing the bar fight with the bullies. That was a lot of fun," he said. "Every single fight scene had its own challenges and it's not something I'd had a lot of experience doing. All of it was tremendously entertaining."

Many of the stunts accompany scenes of David's (spoiler alert!) many kills. But even as David is slashing the throats of the ensemble cast, we still want him to succeed in his sinister endeavors on some level.

Stevens has a number of films coming up, including the Liam Neeson drama, Walk Among the Tombstones, and the latest Night at the Museum sequel, where he'll be portraying Sir Lancelot. The Guest hits theatres Friday, September 17.

I read very widely and I always look to see what's around the corner. I've got a number of different things coming up: Night at the Museum at Christmas is a action comedy, and The Ticket which is a very intense drama, and things in between, so I've been exploring quite a range of things at the moment.