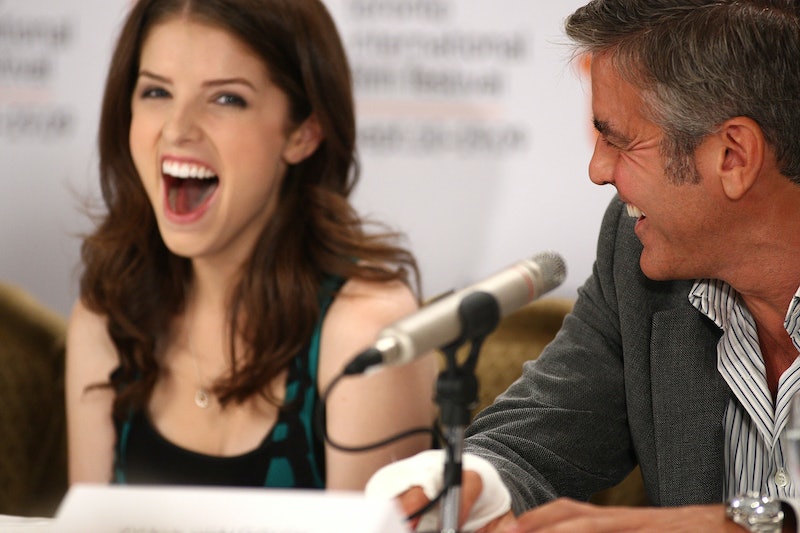 Flashback to 2009: Anna Kendrick and George Clooney are on the set of Up In the Air, the movie that will eventually earn Kendrick her first Oscar nomination. So how's the future Pitch Perfect star doing? She's pretty nervous. Luckily for her, Clooney is a notoriously smooth pal to have around on a film set. Kendrick talked a bit about her behind-the-scenes interactions with Clooney in the most recent episode of WTF With Marc Maron. Nerf products were involved.

Looking back on it I think there were times where he could tell that I was in my head, over-thinking. There was a day when I was really in my head about a scene that we were about to do and he was, like, throwing Nerf footballs around and intentionally hitting me. Which at the time I was genuinely like 'bro, I'm trying to get in the scene' and stuff, but it was like — you need to snap out of it a little bit.

Here's Kendrick on the nerves, as lovingly transcribed by Vanity Fair:

George [Clooney] was so nice. I didn’t meet him until we were on set together. There was the first thing we shot together, we were doing a sort of walk-and-talk, and we were waiting to go, and he was like [under his breath], 'Do you get nervous? I get nervous.' I was like, 'Oh, my God!' It was the smallest thing, but it, like, opened up my world. […] He probably does that for everybody when he can tell they’re like, 'What am I doing here? I don’t belong here.' Just a couple of words from [Clooney] and you’re like, 'Oh, my God, he’s a person! I’m a person. WE’RE THE SAME!'

Those movie stars and their bonding tactics. So cute.

And hey, it seems his calming efforts paid off: