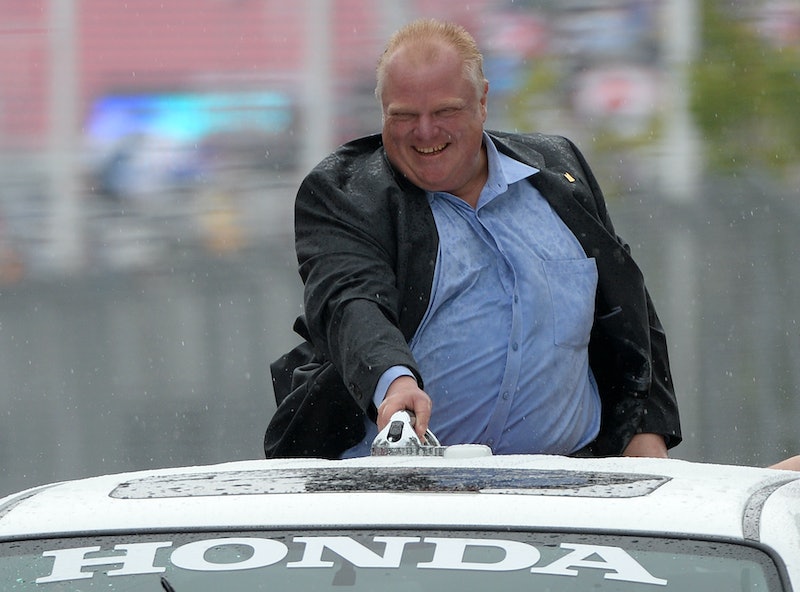 Everyone's favorite raccoon-gettin', crack-smoking, hilarious meme of a mayor has a new best friend: according to accused-rapist-slash-former-boxer Mike Tyson, Rob Ford is the best mayor Toronto's ever had. Gaww, isn't it sweet when one aggressive drug user meets another aggressive drug user, and all the racist drivel one of them has spewed over the years just... fades away?

The two met earlier this week in the mayor's office at city hall. There, they told each other how much "respect" they have for one another, slathering each other with compliments in a Vince-Vaughn-Owen-Wilson style bromantic expression of emotion. After saying that Ford was “the best mayor in Toronto history,” Tyson told reporters: "I'm a big fan of the mayor like most Americans are"— huh!?— "I'm just happy to meet him. I'm not here to give him advice."

To which Ford replied: “We’re cut from the same cloth,” clearly either forgetting that his friend has been convicted of both rape and assault , or else thinking of that time Tyson plead guilty to cocaine possession. “There’s no nonsense," Ford added. "I respect him.” In case that wasn't enough, Ford also said that he'd "idolized" Tyson when he was younger. (Wait, finally an explanation about the crack habit!)

They also defended each other's private lives, because, you know, they "get" each other. When Ford was asked whether it bothered him that he'd be meeting a convicted rapist, he said: “I’m not going to comment on his personal life.” And Tyson took it a step further, telling journalists:

He has a troubled past because he has 24 hours surveillance in the press. We have no idea what you do behind closed doors, or what your habits are, or anybody else’s habits are... Do you prefer him to be a guy that’s clean-cut, and behind the door you never know what he’s doing? Human beings have a problem with being real with themselves.

In spite of the questionable logic, Torontonians seem to agree with Tyson. With October's mayoral elections inching ever closer, the latest polls are putting Rob Ford in a close second place to John Tory. Apparently, no one cares that Ford's a racist, homophobic, sexist, public urinator who has aggressively denied and blamed his way through most of his crimes-caught-on-tape.

Apparently, Tyson said it all when he said: "We all make mistakes. He’s a human being. He’s no different than anybody else."

Excuse me a minute while I go cry for the future of Canada.