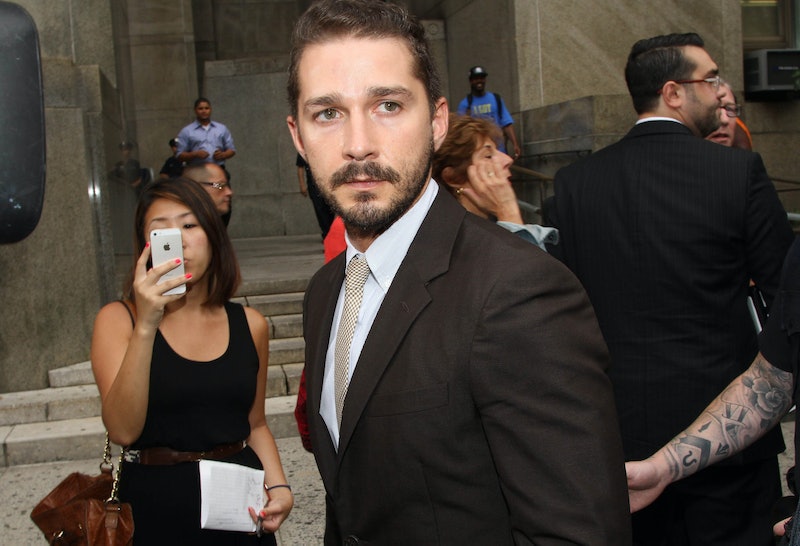 It's not secret that actor Shia LaBeouf got into some situations of both the illegal and extremely confusing variety earlier this year, but now it seems he may be on a better path. Shia LaBeouf pleaded guilty to disorderly conduct on Wednesday, Sept. 10. In June, New York City police arrested the Nymphomaniac actor when he brought his own theatrics to a Broadway production of Cabaret and was said to have yelled at cast members, slapped individuals in the audience on the back, and screamed profanities at a security guard. Those in attendance thought he was working on a role, possible drunk, or just being unruly.

Assistant District Attorney Alyssa Russell said in court Wednesday that LaBeouf was charged "for refusing to leave a theatrical performance when asked, for creating unreasonable noise and using obscene language outside of Studio 54, and for spitting at a police officer at the Midtown North police precinct." According to Judge Diana Boyer, the actor must now successfully complete a three-month treatment at a facility called The Hills and avoid further arrests for the charges to be dismissed.

LaBeouf's stint at The Hills is on top of his current voluntary treatment, which LaBeouf’s rep, Melissa Kates, says the actor has been receiving for alcohol addiction since July. Kates told ABC News earlier this summer, "He understands that these recent actions are a symptom of a larger health problem and he has taken the first of many necessary steps towards recovery."

The Cabaret arrest rounded out a few months' worth of unusual, outlandish behavior from LaBeouf. Back in December 2013, LaBeouf was caught plagiarizing Daniel Clowes' graphic novel Ghost World in what was the actor's directorial debut HowardCantour.com. LaBeouf apologized for it by — and I cringe at this — plagiarizing a Yahoo! Answers post from four years ago. The Internet was not kind to LaBeouf's blatant stealing — because it was stealing — and he became everyone's favorite target.

This situation may have led to another stunt, which occurred in February. As he walked down the red carpet at the Berlin Film Festival, LaBeouf sported a tux and a brown paper bag with the words "I am not famous anymore" covering his face. LaBeouf later turned this into an art exhibit of sorts called #IAMSORRY.

The actor's attempts to call this series of unusual events a type of performance art, drew skepticism at the time, and considering he ended up in voluntary treatment, it seems that it was more a mishandled reaction toward the bullying and backlash.

LaBeouf will be back in court on Nov. 12 to determine if he complied with the judge's orders.