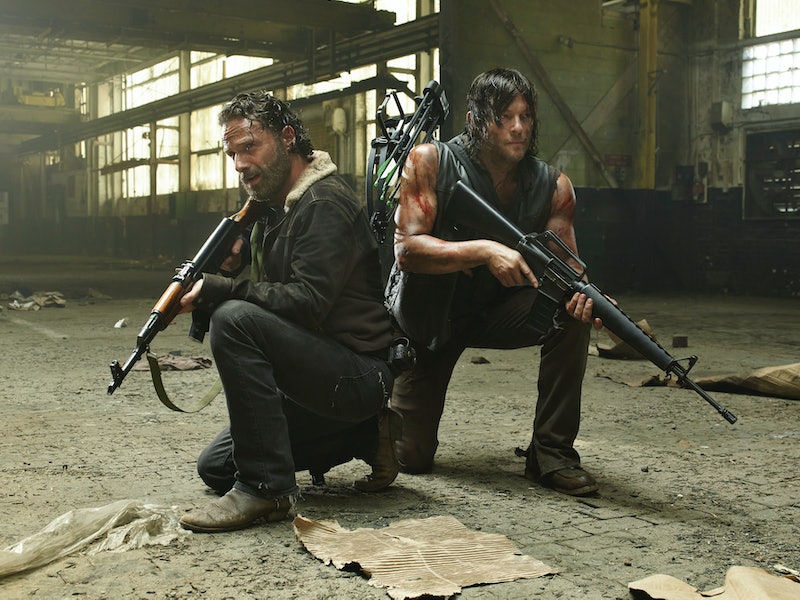 Daryl Dixon is causing rumors. The man who plays person-most-likely-to-kick-ass-in-the-zombie-apocalypse on The Walking Dead, Norman Reedus, posted photos on Twitter of his hand severely mauled — which led fans to ask, is Daryl going to lose his hand this season? Reedus used the tweets to joke that he married Greg Nicotero, who is an executive producer and special effects makeup designer on the show. (For the upcoming Season 5, Nicotero also took over directing the first episode.) Nicotero put a ring on it, and the last photo Reedus posted was the bloody hand on the ground — no body attached, but with the ring still on it — with the word "Divorced." What's a The Walking Dead fan to think??

In the comic books, Rick actually lost his hand, but as of the end of Season 4, Rick clearly still had both hands. Could the show have decided Daryl should be the one to lose a limb? With how tight-lipped and vague the showrunners are about what's coming for Season 5, I sincerely doubt that Reedus would post a spoiler like that. Plus, The Walking Dead creator Robert Kirkman discussed the possibility of having a one-handed Rick on Sundance TV's The Writers' Room back in April. He said that while he liked Rick losing his hand in the graphic novel (if someone can "like" something of the nature, it would be the creator of zombie-filled The Walking Dead), he said having a one-handed character on the TV show would be "impossible."

Now, that's kind of ignoring the fact that Daryl's brother Merle lost his hand on the TV show (which was thanks to Rick for handcuffing him on roof, leading him to saw off his own hand). But in the understatement of the zombie apocalypse, Merle was no Rick — he wasn't the hero of the show. With all of the screentime that Rick gets, I can see where Kirkman is coming from. Yet, Daryl is also a central character. And would they really have Daryl meet the same fate as his brother?

Unfortunately, we know that survivors with amputations are at a disadvantage in The Walking Dead, as we saw with Hershel. I knew the show would kill him off before the group had to leave the jail. With their medical limitations, there was no way an older gentleman such a Hershel would have been able to survive if zombies attacked them out on the road with only one leg. Now, a hand is a different story, and as Merle showed us, you can replace it with a badass blade. But what about Daryl's beloved crossbow? It's almost an extension of himself and I can't imagine him not being able to use it.

Since Daryl is not a character in The Walking Dead comics, we really have nothing to base his future off of, but I'm 99 percent sure it's just Reedus being funny on set. Reedus has a history of being involved in pranks. Andrew Lincoln (who plays Riiiiiick!) and Nicotero setup Reedus in January for an intense prank with fan Nick Santonastasso. Reedus later pranked Lincoln back (in a much more subtle way).

Although not nearly as epic as the zombie prank that Lincoln pulled on Reedus, I just love watching my two favorite zombie slayers bro out off-set.

With all of the theories that The Walking Dead fans can speculate about, I'm not going to get too concerned that Reedus spoiled anything. But see for yourself with his eyebrow-raising tweets.