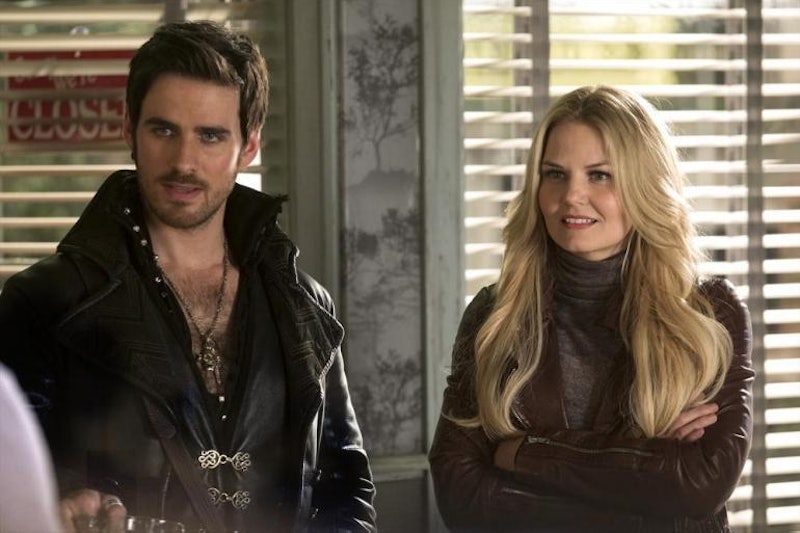 It isn't always smooth sailing for the romances on Once Upon A Time and though some fans predict that Tinker Bell, Hook, and Emma will soon form a new love triangle, I disagree. When the enchanting Season 4 premiere finally comes around we can certainly expect some juicy scenes between Emma and Hook, along with some inevitable relationship drama. In fact, an ABC synopsis of the premiere reveals that Hook is discouraged that Emma is more interested in comforting Regina after being responsible for the return of Robin Hood’s wife, rather than focusing on their new relationship. The old Hook might've had too much rum and sought out a rebound, but as the premiere approaches, I’m still not convinced Tinker Bell will interfere and here's why.

HOOK RISKED EVERYTHING TO WIN EMMA OVER

Hook made a less-than-charming pass at Tink during Season 2, but the reality of the matter is that Hook’s motive, as usual, was to get Emma’s attention. At this point Hook has climbed a beanstalk, fought three villains, traded his beloved ship, saved Henry’s life twice, and literally traveled across realms for Emma. Now that he’s got her hooked (see what I did there?), there’s no way he will let his old fairy friend get in the way. If the two Neverlanders turn out to have a past, great, who doesn’t? Any past he has with Tink was nothing but an attempt to get over Milah, and let's not forget that he left her stranded and wingless in the midst of Peter Pan and his lost boys.

THE BLONDE FAIRY’S GOT HER WINGS BACK

When Tink defeated Pan’s shadow in Season 3, the Blue Fairy assured Tink that she deserved her wings and whole-heartedly apologized for removing them in the first place. I don’t think her first act of fairy-redemption is going to be breaking up Hook and Emma. Tink admitted that she knows Hook is only in Storybrooke for Emma, so what's the purpose in even trying? She spent endless years in Neverland with nothing to think of but vengeance and now that she’s back in the fairy game, it isn’t likely that she will ruin her good name for a second time over a pirate who's with someone else.

Calm down, I don’t mean she’s going to make the love triangle between Regina, Robin, and his resurrected wife, Marian, even more complicated. I just mean that Tinker Bell is the type of person more likely to finish what she started than to cause more drama than we’re already expecting. Now that Regina followed Tink’s advice by overcoming her fear of finding a second true love, there’s no reason that she shouldn’t let the Green Fairy back in. After all, with Robin’s wife back from the dead and new reasons to seek vengeance on the Charmings, Regina is really going to need a friend this season.

Last season, Tinker Bell was introduced as a lovable and mysterious fairy who would risk everything to help the Evil Queen find love again. Her rocky past with Regina turned her dark for a time, but deep down she still believed that love would mean redemption in any of its forms. Don’t get me wrong; Tinker Bell deserves love and redemption this season. But hopefully in this case, Tinker Bell’s love for helping others will keep her in the light and ultimately trump any affection she might feel towards Hook.