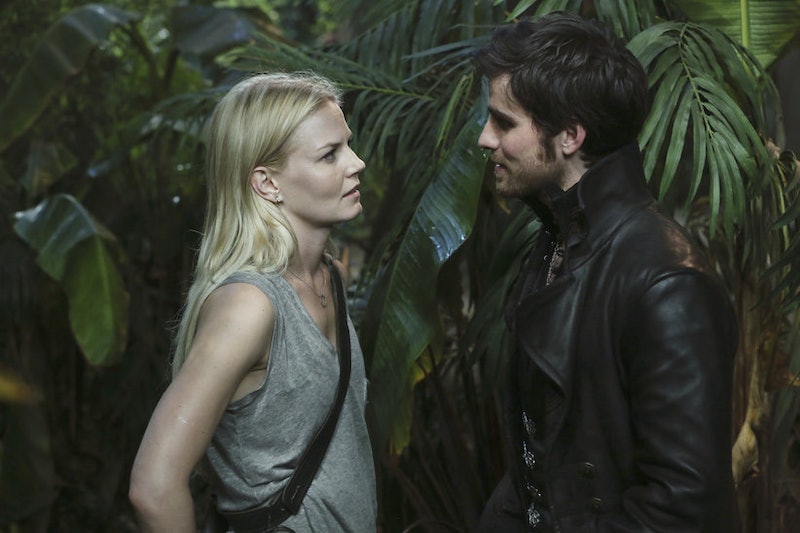 Oh Hook, you handsome scallywag, you. It's impossible not to get pulled into this swashbuckling captain's web of seduction. So when Once Upon a Time brought Emma and Hook together in the Season 3 finale, it really wasn't all that surprising. I mean, just look at this guy! I've seriously never been more attracted to guy-liner in my entire life. I don't know — somehow, he makes it work. So viewers can certainly expect plenty of steamy Captain Swan scenes by the time OUAT Season 4 rolls around. However, that doesn't mean this romance is going to be smooth sailing from here on out. In fact, I predict some stormy waters ahead for these two mateys.

Now don't get me wrong — I wholeheartedly agree that Emma and Hook belong together. Their chemistry is evident in every single scene they're in. But when has a happily ever after ever been easy on this show? There are bound to be a few obstacles in their way. Emma's already made an enemy out of Regina (again) after she and Hook accidentally brought Robin Hood's wife back into the picture during their little trip to the past. Now Regina is back to being single and she is not happy about it. Will this mean she'll resort back to her Evil Queen ways? Probably. If this show has taught us anything, it's that as easily as she can be good, Regina can also be extremely dangerous and vengeful when you mess with her.

Additionally, ABC has released an extended synopsis of OUAT's fourth season, which highly eludes to the fact that Regina will indeed return to her dark and villainous ways once more.

Now that Emma has brought back Robin Hood's wife, Marian, and possibly sparked the end of Regina's relationship with him, will she return to her old, evil ways and do everything in her power to get even?

So I'm betting revenge is going to become a huge motivator for Regina this fall. And what better way to get back at your enemy than by bestowing the same betrayal on them as they did to you? Basically, I think Regina is going to use Tinker Bell to break up Emma and Hook.

There's definitely been a little flirtation between these two in the past, and I'm sure Regina will do everything in her power to bring that bubbling up to the surface. Who needs a poisoned apple when you've got jealousy at your disposal?

Hook already has a bit of a past with Tink, so if Regina were to create a fight between him and Emma, there's a good chance he'd turn to this blonde fairy for comfort and guidance. Before you know it, they're sharing a bottle of rum and POOF! — they're climbing aboard his Jolly Roger (interpret that as you will).

Sure, they pretend to be at odds with one another, but then again, that's exactly how Hook and Emma started out. Having the ability to get a rise out of someone means there's passion there. Passion that could potentially be explored if given the right push… or in Regina's case, a shove.

A little kinky for an ABC show, but we'll go with it.

The bottom line is that Regina is no fool. If she even so much as notices these two talking to each other, she'll find a way to make it hurt Emma and ruin their relationship — just like how Emma ruined hers with Robin. After all, hell hath no fury like an Evil Queen scorned.