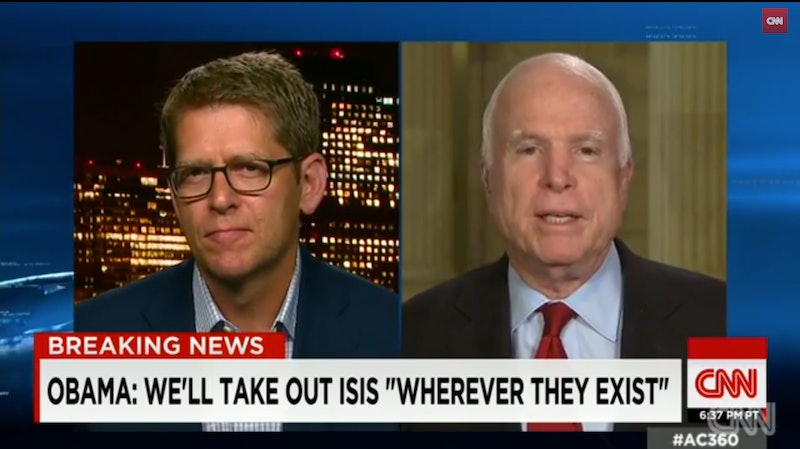 When Jay Carney left the White House, rumors began to swirl regarding his future employment. Head of PR for Apple? Or for the smaller, but perhaps equally exciting, Uber? No, it seems not. Instead, he's taken on a position as political commentator for CNN, where he can relive his years of dealing with pointed questions by...more pointed questions. And nothing could inaugurate the press veteran better than a Jay Carney vs. Sen. John McCain showdown live on CNN.

Just after President Barack Obama laid out his plans for dealing with ISIS crisis Wednesday night, McCain (R-Arizona) went on CNN to tell everyone just how much of the current Middle East disaster is the president's fault — and how wrong about everything Carney was, too.

“I’m astounded that Mr. Carney should say that the Free Syrian Army is now stronger,” McCain said, after calling Obama's speech a "weak argument." Immediately, Carney interrupted him to say, "Well that's not what I said, Senator..." at which point they began to talk over each other, setting the stage for the rest of the segment.

“You just didn’t choose to know. I was there in Syria. We knew that – c’mon," McCain told Carney. And then, it got personal: "Your boss is the one that, when the entire national security team wanted to arm and train them, that he turned them down, Mr. Carney.” Yah, Jay. Your former boss, who happens to be the head of a free elected government. Jeesh.

Later, after more, simmering, simultaneous spewing of facts, it got even more personal. “You, in your role as a spokesperson, bragged about the fact that the last American combat troop had left Iraq," McCain told Carney. "If we had left a residual force, the situation would not be what we have today.”

Sparks continued to fly as the "debate" continued, centering mostly on McCain's assertion that Carney doesn't understand what "facts" are. At one point, Carney tried to inch towards peace, saying: “Senator, I can posit, with great respect—" But he was brutally interrupted, again. Said McCain: “No, you can’t. No, you can’t, because you don’t have the facts. You don’t have the facts, Mr. Carney. That’s the problem.”

The best part of the showdown, though, was when host Anderson Cooper tried to interrupt, piercing the conversation with a repeated — and futile — Jay-J-J-J-J... Eventually, Cooper just looked at the camera with a bemused smile on his face while McCain continued to rant.

"The fact that he didn't leave a residual force in Iraq, overruling all his military advisors, is the reason were facing ISIS today," McCain said, speaking of Obama. "We had it won. We had won. The victory was there."

So, to wrap up: ISIS is all Obama's fault and... don't invite Carney and McCain to the same dinner party.