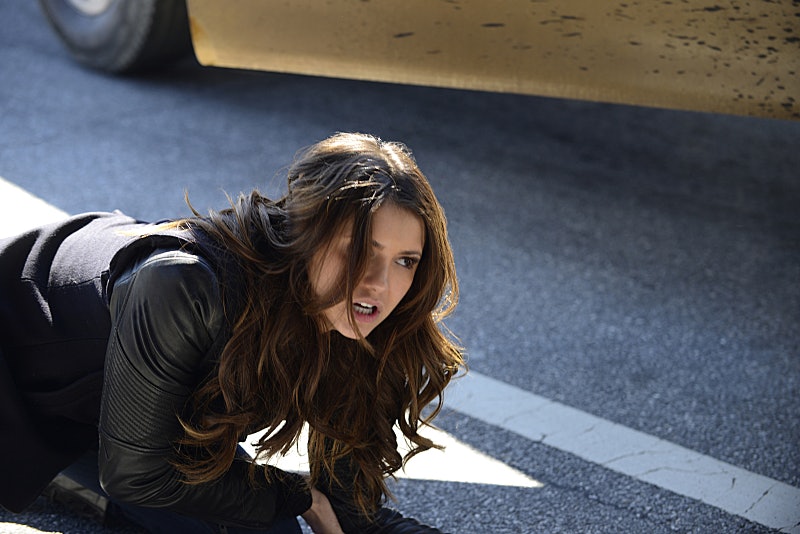 Have you dried your tears yet? Honestly, I don't blame you if you haven't — I still wake up every day hoping that Damon's Season 5 finale death was just a very bad dream. (It wasn't, in case you were still unsure.) It's been a sad and emotionally empty four months since that fateful finale episode and we've still got three more weeks to go before The Vampire Diaries Season 6 premieres on Oct. 2. How will we go on without knowing what will happen to Delena in Season 6? Lucky for you, there are plenty of ways to keep your mind off of Damon's uncertain future and the fact that Steroline definitely won't happen anytime soon.

Being a TVD fan during the off-season is actually pretty great. Mostly because Julie Plec, her fellow execs, and TVD's stars love us so much that they spew spoilers all over the Internet for our enjoyment. (Or maybe they were just peace offerings this summer for constantly enraging us and killing Damon.) But also because Nina Dobrev, Paul Wesley, and Ian Somerhalder are kings and queen of social media — they might not be on TV, but they are constantly all over our Twitter and Instagram feeds like PSLs.

Basically, you just feel the love. There's also no shortage of ways to fill the TVD void during the summer months. So, with just three more weeks to wait until Oct. 2, here are 9 TVD-approved ways to fill them AND get you pumped for the Season 6 premiere. (RIP, DAMON SALVATORE.)

Rewatch The Series On Netflix

Are you feeling nostalgic for simpler times when Damon was alive and Stelena was still a thing? Well, TVD Season 1-4 are all streaming on Netflix. You can totally tackle that in three weeks, right?

If you're not lol-ing, you should be.

Read (Or Reread) The TVD Series

And try not to hate life when you realize that Damon and Bonnie will probably hook up in Season 6.

Take A Crash-Course In Biology

According to new Season 6 spoilers, Elena's going to be a pre-med major when TVD premieres. Three weeks is enough time to learn basic biology, right? There's got to be some type of intensive online class you could take.

Stefan is the king of the journal. So, take a leaf out of his book and start a journal for your TVD Season 6 hopes, dreams, and theories. Or at least to just keep track of all of the spoilers from hiatus.

On TVD, we party — it doesn't always end well, but we always party. I wouldn't be surprised if Season 6 opened with Damon throwing a rager for all of the dead people on the other Other side. And if your party is a real success, you'll probably be cleaning it up for the rest of the time until Oct. 2. Cheers.

By no means do I support hating on Nikki Reed, especially after Ian Somerhalder asked fans to stop sipping haterade on Instagram. But, like, are there any TVD fans that aren't Team Ian & Nina or Team Ian & [Enter Your Name Here]?

We can't stop and we won't stop.

Make A T-Shirt Of Your Favorite 'Ship

Or you could just buy one of the many offered by CafePress.com.

More like this
Will Vampire In The Garden Get A Season 2? What To Know
By Kadin Burnett
Netflix Just Revealed When 'Never Have I Ever' Seasons 3 Will Premiere
By Gretchen Smail and Alyssa Lapid
'Atlanta' Season 4 Could Be Here Sooner Than You Think
By Kadin Burnett
20 Photos From The 'Stranger Things' Season 4 Premiere To Make You Feel Old
By Alyssa Lapid
Get Even More From Bustle — Sign Up For The Newsletter