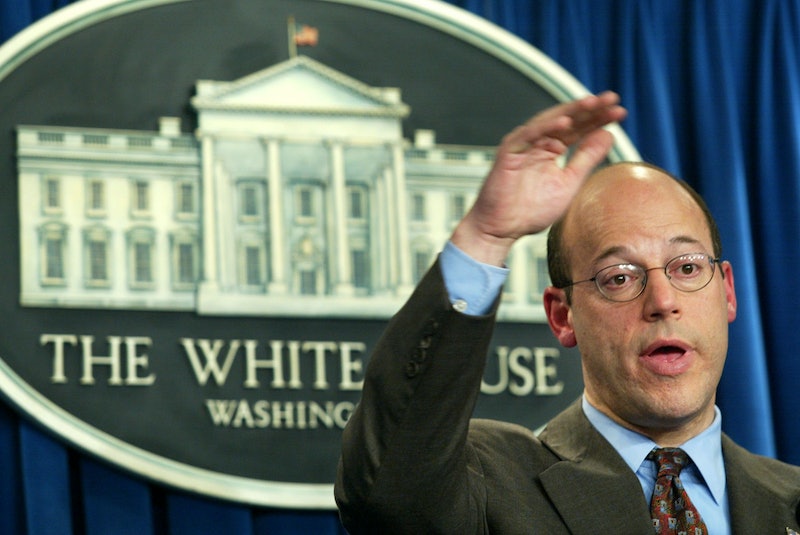 On the anniversary of 9/11, former press secretary Ari Fleischer is live-tweeting the day's events, sharing his perspective on the terrorist attacks that rocked the nation 13 years ago. Beginning at 8:40 a.m., Fleisher recounted every move and decision made by the George W. Bush administration, which has received criticism over the years for its delayed response. This is not the first time Fleisher has live-tweeted the events of 9/11 — he did this in 2013 — but the tweets are still just as chilling.

Fleischer was with President Bush on the morning of Sept. 11, 2001, sitting in the presidential motorcade on the way to an elementary school in Sarasota, Florida. There, Bush did his infamous reading of The Pet Goat to schoolchildren while the second hijacked commercial plane hit the World Trade Center's South Tower. Bush came under fire for not pausing, or altogether canceling, his reading event. But as Fleischer tells it, it was actually the press secretary's decision to continue reading.

According to Fleischer, when the first hijacked plane struck the World Trade Center, Bush and his staff thought it was an accident — like most newscasters did at the time. It wasn't until the second strike that the Bush administration knew "it had to be terrorism."

When Fleischer tells it via Twitter, the controversial decision to not immediately address the World Trade Center attacks or leave the school seems somewhat reasonable. This was 2001, where everyone had pagers instead of iPhones. As Fleischer reminds us, there was no Twitter then, so news didn't break as quickly — or as incompletely — as it does now. And, if you can remember the events of 9/11, most newscasters in the tri-state area were paralyzed as they watched the events unfold live on-air — including the second World Trade Center strike.

In this day and age, it's hard to imagine a president would delay a response to a terrorist attack on United States soil, especially knowing the criticism he or she would receive for it — just look at how President Obama was criticized for playing golf after addressing the murder of James Foley.

Once Bush and his staff left the Sarasota elementary school, they swiftly boarded Air Force One. Fleischer reveals that the plane took off at a steeper angle, thanks to reports of a sniper on the runway.

Fleischer also claims that Air Force One — or "Angel," as it was known then — was being targeted by terrorists. Tillman, the pilot, previously confirmed these claims in a 2011 interview with USA Today. "We get out over the Gulf of Mexico, and the vice president advises the plane that 'Angel' is next," Tillman said at the time.

The former White House press secretary also highlights some of the initial confusion, including reports that six commercial planes were hijacked. In handwritten notes on his legal pad from that morning, Fleischer wrote, "they think 6 hijacked a/c."

We know now that is was just four: two that struck the World Trade Center, one that hit the Pentagon, and a flight that crashed into a Pennsylvania field, after the passengers diverted it from attacking Washington, D.C.

Does Fleischer's live-tweeing of 9/11 vindicate Bush from his actions taken that fateful day and over the next seven years? The riveting tweets certainly humanize the seemingly cold administration. Fleischer reveals that, despite Washington being a target, Bush wanted to return to the nation's capital immediately.

However, it's difficult to take Fleischer's tweets into account now that we know the context: Bush was briefed about potential Al Qaeda terrorist attacks — including the use of hijacked planes — more than a month before 9/11. Reports from the 9/11 commission also found that the FBI increased their scrutiny of terrorists, and a White House memo from July 2001 said it would put the nation on high alert. With that knowledge, the Bush administration's response — from Fleischer's perspective — seems negligible and ill-prepared. Without teetering into "false flag" territory, there are still questions worth asking Fleischer: Why was there still so much protocol confusion? Wouldn't they have planned for this?

Fleischer never mentions previous briefings, nor does he say why the administration didn't have a clear protocol for a terrorist attack involving planes. Without context from the days, weeks and even months before 9/11, Fleischer's live-tweeting doesn't paint the full story of the 9/11 terrorist attacks.

However, it's still no less compelling.