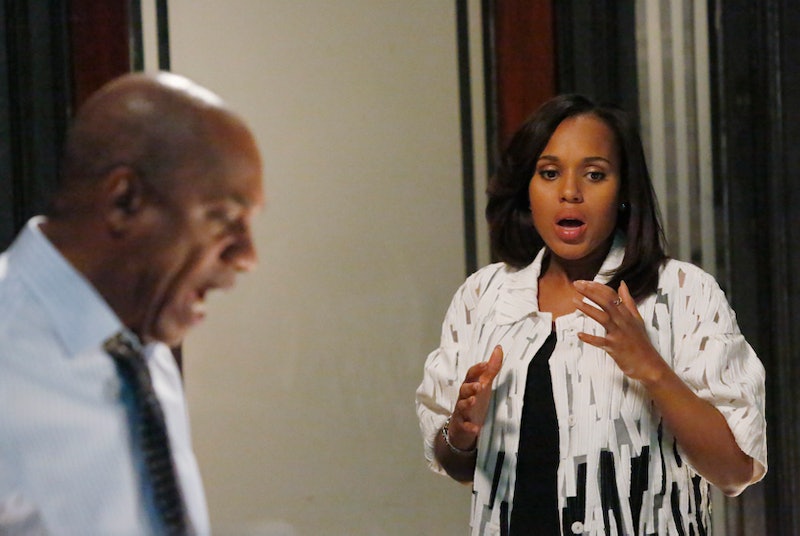 In a stroke of sheer genius, Buzzfeed hosted the three leading ladies of Shondaland for a talk Wednesday night. Grey's Anatomy's Ellen Pomeo, How To Get Away With Murder's Viola Davis, and Scandal's Kerry Washington were all present. It was like some kind of triumvarate these statement of what Shonda Rhimes is doing to and for the media landscape. Near the end of the evening, the women were asked what advice they'd give their characters. Kerry Washington's centered around getting Olivia Pope some therapy — and how it might ruin the show if she actually followed through:

I always think, Get therapy, Olivia! Get therapy! The problem is if Olivia got a really good shrink, the show would be far less interesting… It just wouldn’t be as much fun. The crazy is so much fun. Everybody is crazy on our show. Keep all of our characters away from shrinks — then Scandal will be good! But, yes, if she was my girlfriend, I’d be like ‘Girl, there is a guy you should call. He doesn’t take it upfront; you’ll get reimbursed. Go get those sessions in. Get em in, girl.’ I don’t know if she’d do it.

It's easy to understand where Washington's coming from here: Scandal is soapy and frothy to the highest degree, and its messy characters and their inability to deal with their issues are at the center of that. But my desire for Olivia to get some psychological help ramped up hard in Scandal's third season — and I think it could be one of the things that could save the show going forward.

If Scandal continues to go the way it's been going, we'll certainly get more than our fair share of high drama — but a show can only sustain itself on its main characters emotional issues for so long before it starts circling the drain. To mix metaphors, eventually things get stale. In fact, sending Meredith Grey to therapy in Grey's Anatomy's Season 4 was the best thing that ever happened to the evolution of that character.

When I think of Scandal's current predicament — hugely popular, but at a crossroads in terms of sustainability — two shows come to mind: Grey's Anatomy and Supernatural. Both have long outlasted initial network expectations: Supernatural's been on the bubble more than once, and Grey's was originally expected to be burned off as a mid-season replacement and canceled/forgotten immediately. Now Supernatural's entering its tenth season on The CW and Grey's is entering its eleventh on ABC.

Scandal doesn't intend to last as long as either of those shows, but it still has valuable lessons to learn from the dramas of each. Both Supernatural and Grey's function as personal dramas based in a world where their main characters are working as saviors. Both have also introduced their share of great, complex characters worth studying. For our purposes here lets look at their Olivias: Grey's has Pompeo's Meredith Grey, and Supernatural has Jensen Ackles' Dean Winchester. They've both grown in key ways, and both shows have done their share of circling the drain. But Grey's Anatomy took an important step that Supernatural seems hesitant of: They had their main character grapple with her emotional trauma head-on, actively working through the mess around her to create a new chapter for herself and her life.

Meredith Grey's prolonged therapy sessions in Season 4 of Grey's didn't stand out to me on first watch — I was already in the midst of my slow break-up with the show, and I wouldn't really come back to it until years later. But when I pushed through the rest of the wheel-spinning and strange grasps for story (don't get me started on the ghost sex), I noticed something: Sending Meredith to therapy didn't decrease the drama — in fact, it made it more bearable, at least on Meredith's end. It's easier to root for someone, or at least to follow them on their long and winding road, when you have proof that they're capable of evolving with their story.

It didn't happen all that once — it built, of course, to a season finale epiphany. But it was key. Dean Winchester's still pulling horrifically co-dependent shit out of nowhere with his brother. He evolved to a certain point, and then he stunted; and tragically so, considering the potential of that character. Meredith's still got her share of drama, and she's still got her mommy issues and her daddy issues and everything in between, but she's not the same sloppy kid she was when those things haunted her every moment. There were things she was bottling up her entire life, and every Scandal viewer knows Olivia's got her share of comparable familial drama. It affects them both intensely, in ways that endanger their lives and put them in emotionally unhealthy relationships.

Shonda Rhimes gave Meredith her chance to stand up to her issues, and we should give Olivia Pope that same chance to grapple with her demons and come out swinging just as hard.

Coldplay's "Fix You" does not have to swell as we go through all this — it's not about being straight-up fixed, whatever that means. What it is about is not being afraid to make room for character evolution. Meredith Grey grew up, but it's hardly like her drama decreased as she did it, and it's hardly like she became suddenly un-flawed. Olivia Pope doesn't have to grow up in the same exact way that Meredith did, but I do want to know that the people behind Scandal know that a new era of the show in which Olivia faces her issues head-on would be far more fascinating to me than watching her lip quiver over Fitz or her father one more time. She deserves a chance to move forward, and I won't ever stop rooting for her mental health.