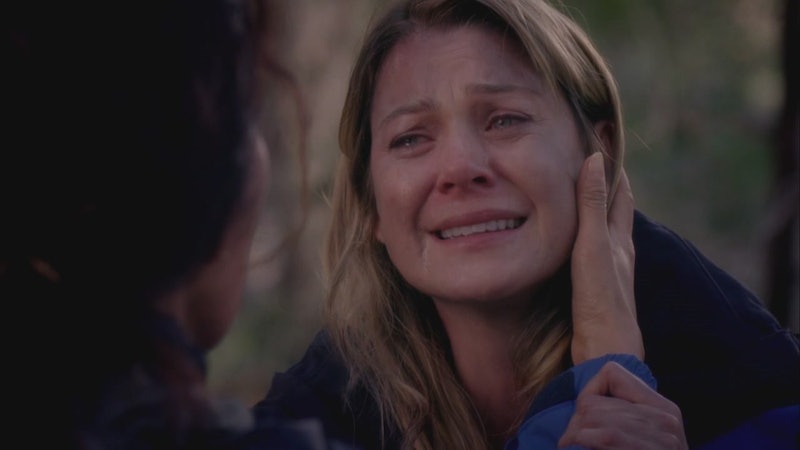 Life is not easy if you're a Shonda Rhimes character, and especially so if she'd had to keep your life interesting for over a decade. The people of Grey's Anatomy, a show that'll enter its 11th season this fall, have experienced every possible trauma there is over the course of the series: shootings, plane crashes, natural disasters, even hospital-exploding bombs. You name it, they've gone through it — but no one more so than Meredith Grey, the show's protagonist and namesake. In just 10 years, that poor woman has experienced more tragedies than any human being, real or fictional, should ever have to deal with, and lucky for her, they just keep coming. Speaking to TVLine on Tuesday, Rhimes said that the upcoming Grey's is "really a Meredith-centric season," and by now, fans know exactly what that means: more trouble for unluckiest character on television.

According to Rhimes, the 11th season will focus on the aftermath of the Meredith-affecting events from last year: "her person" Cristina's move to Zurich, Derek's desire to leave Seattle, the arrival of another half-sister she knew nothing about. There's little doubt that these issues will make for compelling drama, but as for whether Meredith will survive them, after having already gone through 10 seasons worth of horror? That's another story. A history of every tragedy Meredith Grey has experienced so far:

Spent Her Childhood With a Workaholic Mom and an Absent Dad

Ellis preferred surgery and having an affair to raising her daughter, and Thatcher moved out early on to be with his new family. Little Meredith was left wandering the halls of the hospital, her only friend an Anatomy Jane doll. No wonder she has abandonment issues.

Found Out Her Mom had Alzheimer's

When Meredith was barely in her '20's, her mother got diagnosed with early-onset Alzheimer's, and Meredith was the only person who knew and could take care of her. Too bad her mom only wanted Richard to visit, not her.

Discovered that Her Boyfriend was Married, and Watched Him Choose The Wife

Who then joined the hospital staff. Not awkward at all!

Puts Her Hand in a Bomb Cavity

But it's totally okay, because Derek got super concerned and they got closer to being back together.

Died for a Bit

In the famous "did Grey's Anatomy just jump the shark?" episode of season 3, Meredith, depressed and possibly suicidal, drowned while no one but a mute little girl was looking. By the time Derek heroically jumped into the water to save her, she was pretty much dead. Eventually, thanks to a weird afterlife metaphor thing, she woke up and was somehow perfectly fine, although...

Got Blamed for Her Stepmother's Death

Shortly after Ellis died, so did Meredith's "surrogate mother," Susan. And Thatcher, the alcoholic bully he is, blamed his daughter for not noticing her symptoms earlier on.

Lost One of Her Best Friends

Oh, George. That moment where Meredith (of course) realized that the badly injured John Doe they're all trying to save was 007, her George, is still one of Grey's most heartbreaking.

Saw Her Husband Get Shot

By a mass murderer, only to then realize that she'd...

Likely because of the stress and trauma of watching her best friend operate on her dying husband, and being held at gunpoint by the shooter.

Because no amount of trauma is too much for Meredith Grey to handle at once. If only she didn't mess up that Alzheimer's trial... just kidding. It's Meredith. Ruining her life would've probably happened anyway.

Which would've been great news, except...

Who, after some initial tension, had become one of the most important people in Meredith's life.

Gave Birth to a Baby During a Terrifying, Power-Outing Storm and Nearly Died

But didn't, because Bailey (who the eventually healthy kid is named after) managed to save her life just in time. But still. Really?!

Thankfully, Richard survived, but for awhile there, it looked like Meredith was going to lose pretty much every parental figure who'd ever meant anything to her in her life.

Got Into a Massive Fight With Her Best Friend

The rift between Meredith and Cristina was wonderfully realistic and powerfully acted, but it was just one more thing for the poor doctor to have to deal with. Couldn't something in her life be easy for her?

Said Goodbye to "Her Person"

And just when Mer and Cristina made up, Cristina moved to Zurich. Forever.

Sure, this one might not be a tragedy, but still, the last thing Meredith needs is more drama in her life. Let's hope this introduction is an easy one, because if Meredith already has to spend next season dealing with losing Cristina and fighting with Derek, a horrible half-sister might actually, finally, be the final straw. Could season 11 be the time when Meredith finally says "screw it all" and moves far, far away from Seattle? Lucky for Grey's fans, we only have to wait two months to find out.

More like this
We Finally Know When 'Grey’s Anatomy' Is Coming Back
By Brad Witter
Julie Andrews Revealed A Surprising Behind-The-Scenes 'Bridgerton' Detail
By Grace Wehniainen
The ‘Squid Game’ Season 2 Renewal Teases A Creepy New Figure & A Return
By Brian Anthony Hernandez and Bustle Editors
Who Is Liam Neeson's Character In The Obi-Wan Kenobi Finale?
By Kadin Burnett
Get Even More From Bustle — Sign Up For The Newsletter