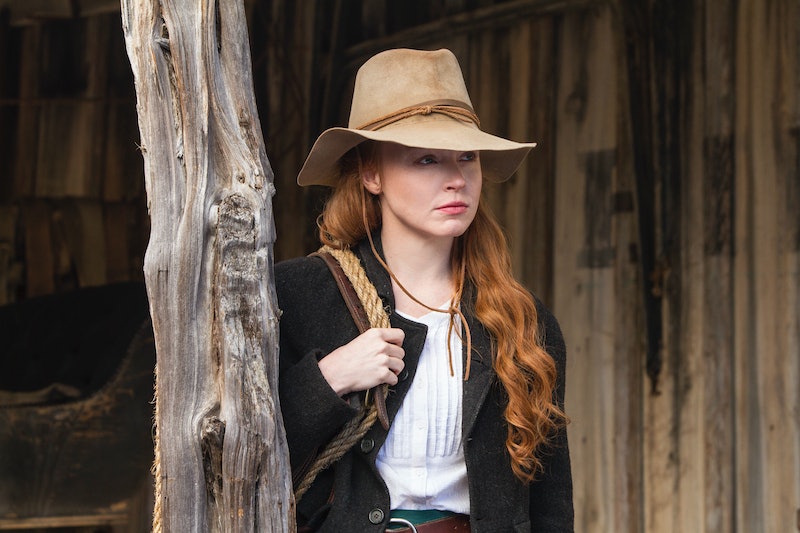 Get your Kleenex ready, friends: Nicholas Sparks is headed to TV. The man behind the source material for such famous tearjerkers as A Walk to Remember and The Notebook served as the executive producer for Deliverance Creek , a two-hour Lifetime movie that will premiere on Saturday at 8 p.m. Deliverance Creek tells the story of Belle Barlowe, a woman raising three children on her own in the years after the Civil War, during which (it is presumed) her husband was killed. Despite being a woman during this oppressive time, Belle nevertheless manages to rise up against the evil bank that is corrupting her town and stealing land from nice people like herself. The film promises plenty of old-timey accents, racist villains, and Belle generally being a badass. But is any part of Deliverance Creek a true story, or based on actual places or facts?

While the film is not being promoted as a true story and head writer Melissa Carter didn't seem to model her story on any specific people or events, there were, historically, women who took the law into their own hands during and after the Civil War. According to the History Channel, there are accounts of women, in both the north and the south, who disguised themselves as male soldiers and marched off to fight. During this time, many women also began working outside the home for the first time, as nurses or other volunteers for the war effort, helping to end the "Cult of True Womanhood" that had defined women's roles throughout the Victorian age.

Despite the existence of all these strong, kick-ass females who broke barriers during the Civil War, don't expect Deliverance Creek to wow you with its feminist politics. Promos show that Belle spends much of her time debating between which love interest she's going to ultimately choose (though she does go all Annie Oakley and shoot some stuff, which is more than I can say for most of Sparks' female characters). Remember, this is on Lifetime, so a minimum of 2.5 love triangles are required per movie. It's a law or something.

The film will serve as a backdoor pilot for a potential series, so we'll have to wait for the Deliverance Creek show before we see just how much of this story is actually about women's roles in the 19th century American west, and how much of it is about making out. Lauren Ambrose, who plays Belle, is best known for her character Claire Fisher on Six Feet Under, one of the most compelling and best-written portrayals of a young woman ever to exist on TV (no, that's not hyperbole, Ambrose really is a great actress). So there is a chance that, with her starring in Deliverance Creek, the show won't be a complete shlock-fest. Based on another trailer, we already know that there will be some sort of subplot involving a slave owner and his unwanted advances toward his female slave, as well as depictions of Belle's struggles raising three children on her own. Plus, there's that whole plan to stop the corrupt, land-stealing bank.

And because this is Nicholas Sparks project, there will almost definitely be a scene in the rain. Probably with Belle yelling about how much she loves whichever guy she ends up choosing. The movie just wouldn't be the complete without it.