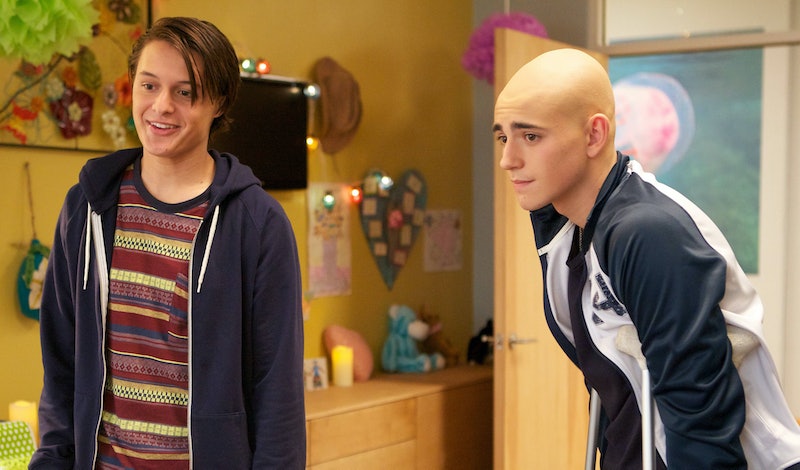 Fox's new series Red Band Society is part hospital drama, part teen soap. And what's a teen soap without its very own love triangle, right? Fox's new drama is no exception to this rule, as proven by the love triangle between Red Band Society's Emma, Jordi, and Leo that is already starting to blossom in the show's pilot episode.

Red Band Society introduced us to teen Jordi (Jordan Palacios), a teenager with cancer who begs Dr. Jack McAndrew (Dave Annabelle) for a chance at life... which he can only get by having his leg amputated. Dr. McAndrew assigns Jordi to a room with another young cancer patient, Leo (Charlie Rowe) and the two quickly bond over their missing (or soon-to-be missing) limbs and their desire to be more than just the "kid with cancer." Unfortunately, the other thing that these two have in common could be what ultimately drives them apart: Their clear affections for fellow patient, Emma (Ciara Bravo).

According to the flashback scenes (introduced to us by Charlie, the young patient who is currently in a coma) Leo and Emma were a very real "thing" for a while, until their reasons for being in the hospital together started to drive them apart. Emma's eating disorder and Leo's cancer gave them both a reason to push the other away, knowing that, should something happen to them related to their hospital stay, they would hurt the other terribly. When we see this former couple in present day, their interactions are less affectionate and more biting and sarcastic, which, because this is a teen soap, is the biggest clue that these two are totally not over it.

But if Leo wants to get Emma back, he may have to do so quickly. Sweet, resilient Jordi also sees something special in Emma, and there's a big chance that she sees the same thing in him. Unlike the hardened-by-life Leo, Jordi has a refreshing optimism that Emma appears attracted to. Even in the face of some seriously messed up stuff, Jordi is just happy to be alive. It's obvious that Emma finds that refreshing... even if, deep down, she wishes that it was Leo with the same optimistic outlook.

Leo and Jordi became fast friends, but if the pilot episode is any indication of things to come, they may find themselves at odds over Emma's affections. It's only a matter of time before fans start taking sides on who Emma should be with — and I can't wait to find out who that is.