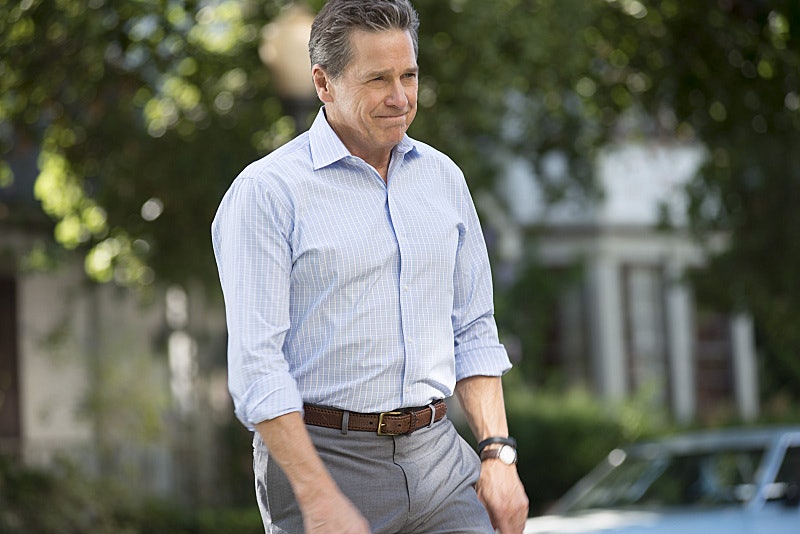 Apparently, the circus is coming to Bluebell this season. We still don't know when Hart of Dixie Season 4 will premiere and, aside from Rachel Bilson's pregnancy being addressed on the show, spoilers for the upcoming 10-episode season have been scarce. Which says a lot, considering Scott Porter and Jaime King's social media photos have done their best to give us a peek at what's going on behind-the-scenes of Season 4. And it looks like King's onscreen dad Tim L. Matheson has been posting on-set photos of his own. In two Facebook photos from Sept. 5, Matheson (as Brick Breeland) is wearing clown make-up. What the heck does that mean for Season 4?

Fans that are anxiously waiting for Hart of Dixie news have seen a lot of photos on the series' stars' social media accounts of, frankly, bizarre costumes. Some of Porter's posts prompted me to think that we might be getting a dream sequence episode in Dixie Season 4. But these photos from Matheson's Facebook take the cake — will Dixie get a Halloween episode this year or are they paying a slightly-creepy homage to the late Robin Williams in Patch Adams?

The actor called this "Phase 1" of going undercover. (I know, you're totally thinking, "What the hell?" Right?)

And he called this "Phase 2." This might actually be scarier than "Phase 1."

Other characters on Hart of Dixie have donned full-scale costumes in the past (remember the medieval jousting tournament to decide who would be Lemon's new boyfriend?) but we've never seen Dr. Brick Breeland dressed up like this. I mean, he's wearing lipstick in these photos. Does this mean Shelby's back in town and forcing him outside of his conservative comfort zone? Considering we know next to nothing about Dixie Season 4, anything's possible.

He could also have just passed the practice over to Zoe and joined the circus — crazier things have happened in Bluebell.