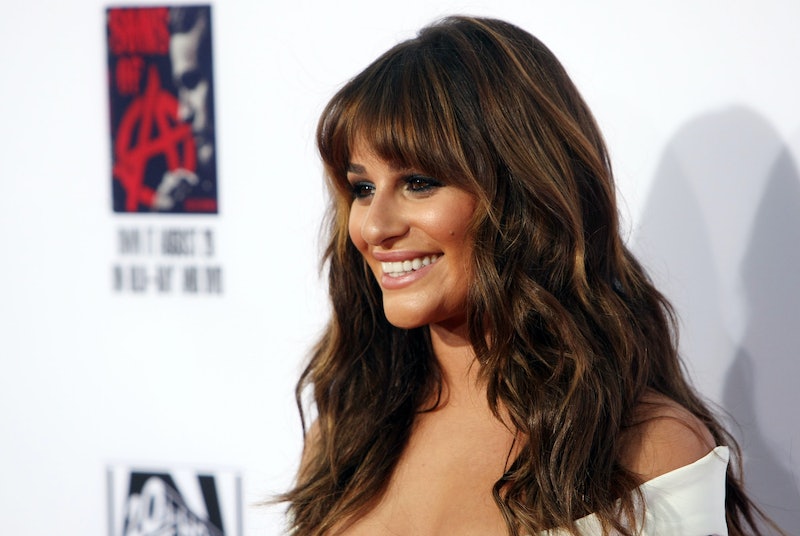 Cohabitation’s a huge step of commitment for any couple — it’s after farting without shame but before raising a pet hamster together — which is why I was surprised to hear that, reportedly, Glee actress Lea Michele and Matthew Paetz are moving in together. It's just that the couple hasn't been together for very long. According to People, Michele and Paetz, a model and aspiring actor, have only been together for four months, and he apparently moved into her $1.4 million home in Los Angeles over the weekend. Now I understand that every relationship is a special snowflake and that a couple has to go with whatever is comfortable for them, but I think it’s worth a look at this four-month-long courtship to see how these two lovebirds got to this important step.

Ah, April, otherwise known as When Lea Met Matthew. Fine, it wasn't a romcom, but we do know that they met on the set of Michele’s music video "On My Way." I’m sure there was a meet-cute at craft services or maybe an awkward introduction where the relative strangers had to shake hands then make-out seeing as he played her video love interest. They didn't immediately start dating, but there must've been a spark.

Michele’s book Brunette Ambition came out, and she surprised Glee fans by admitting that she and her co-star Matthew Morrison dated for a hot minute. She also admitted during an interview that she’s ready and willing to be a parent. Clearly, she was comfortable enough with her dating history and singledom to share all of this so candidly. That or she just wanted to shock us all by telling us that she dated Mr. Schue, which she totally did.

The final cut of her "On My Way" video was also released in May thus cementing Michele and Paetz together forever in Vevo format.

Rumors started about Michele and Paetz dating. Then TMZ reported that Paetz was a former gigolo who went by the name "Christian" on a site called Cowboyz4Angels. His profile has since been taken down, but the Internet had a field day with the news.

Or at least in the eyes of the public, they do. Michele and Paetz were spotted out together going for a romantic walk in a well-lit park.

Then they decided to take a summer vacation together. First was Santa Barbara with Glee co-stars Jenna Ushkowitz and Becca Tobin, then a romantic Italian getaway, then NYC, Michele's hometown. Ah, vacationing! They were incorporating each other into their lives, and also showing each other that they can travel with each other without arguing too much.

Things settled down for Michele and Paetz. They started hiking a lot around L.A. They got cozy during Justin Timberlake’s 20/20 concert — which, really, cements any relationship. Maybe one of JT's songs is their song. Like "Mirrors" or "Suit and Tie" really means a lot to their relationship and they wanted to celebrate some sort of anniversary together in an arena full of hundreds of humans.

September 2014 — They Move In Together

Four months of dating and now cohabitation. These two are set for the hijinks that come with moving in from sharing a bathroom, cooking dinners with each other, and merging their DVD collections, for sure. Seriously, if you can stand a person after traveling across an entire ocean, there's a pretty good chance you'll make it.