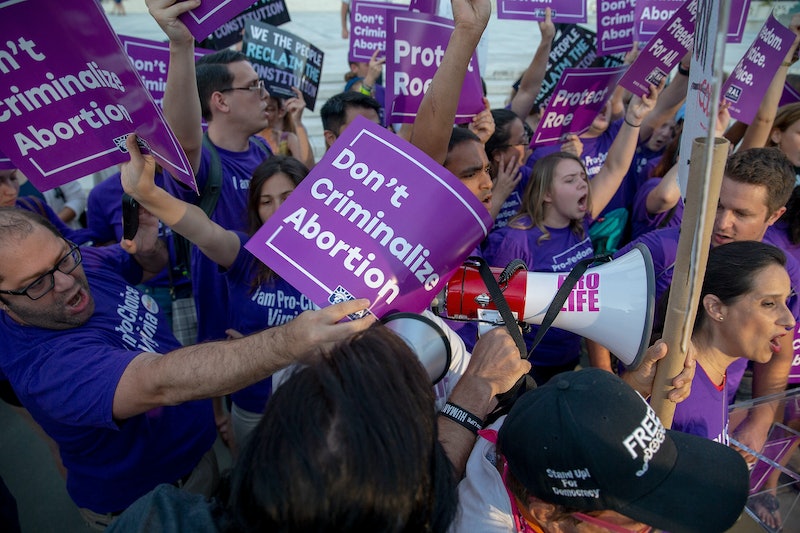 In yet another blow to women's autonomy over their bodies and health care, the Missouri legislature voted Wednesday night to override a veto by Gov. Jay Nixon of a bill that sought to expand Missouri's mandatory waiting period for abortions from 24 hours to 72 hours. The override makes Missouri the third state in the country — along with Utah and South Dakota — that requires women to "reflect" for three days before having the procedure. Unlike Utah, the Missouri law does not grant exceptions, even in the case of rape or incest.

Anti-choice lawmakers argue that the law is an important step for women who might not have fully considered the ramifications of their decision before scheduling their abortion. If "you get a couple of more days to think about this pregnancy, think about where it's going, you may change your mind," contends Republican state Representative Kathie Conway.

The subtext of Conway's argument — and the argument for a mandatory waiting period in general — is that women who seek abortion don't know what they're doing. They don't understand their options, don't really know what an abortion means, and they need to be guided through the process by people better equipped to handle the delicate decision of terminating a pregnancy.

But in truth, the Missouri law is just another way that women across America are being systematically stripped of their individual rights. Physicians are required by law to obtain informed consent before performing any medical procedures. Mandatory waiting periods aren't a means toward achieving a higher level of informed consent —they're a tool used by anti-abortion advocates to exert guilt, fear, and financial burden on women who already face a difficult choice.

In 1992, Stanley Henshaw and Frances Althaus, then researchers for the Guttmacher Institute, looked at the impact of Mississippi's mandatory 24-hour waiting period on state-wide abortions. They found that while the waiting period did decrease the overall number of abortions performed in Mississippi, abortions in neighboring states without a waiting period increased.

Among women with less than 12 years of education, abortion rates fell most markedly; highly-educated women were less affected by the waiting period. Moreover, abortions became more common later in pregnancies. Overall, they concluded, the law seemed to prevent between 11 and 13 percent of women — who would have otherwise had an abortion — from having the procedure done. But it wasn't because the waiting period changed their mind.

"Clinic directors in Mississippi have found that few women change their minds after receiving [the mandated information] and almost all women who make the initial visit to the clinic return for the abortion procedure," they wrote. "The effect of the law must therefore result from the creation of barriers that some women are unable to overcome."

Other studies show that mandatory waiting periods result in a greater financial burden for women who seek abortions, as it forces them to make multiple trips to a clinic before services are administered. As access to abortion clinics continues to shrink, forcing women to travel long-distances multiple times might prohibit women who would otherwise seek abortion from being able to access to such services. The burden seems especially heavy for low-income women, who often can't afford the procedure, let alone travel expenses and multiple days away from work. According to the Guttmacher Institute, forty-two percent of women receiving abortions live below the federal poverty level.

A 72-hour waiting period might place a greater burden on women than a 24-hour waiting period, but the bottom line is the same: mandatory waiting periods don't work. They're condescending, suggesting that women who seek abortion rush into it flippantly — and if just given a little more time and guidance (under the guise of counseling, which is often designed to dissuade women from having an abortion) women might come to the right decision.

In practice, mandatory waiting periods place undue burden on women, both emotional and financial. They intensify geographic barriers, forcing women to travel back and forth to increasingly rare abortion clinics. Mandatory waiting periods are dangerous, because unlike even clinic closures or denied access to healthcare, they masquerade under a guise of empathy and compassion, supposedly giving women a greater peace of mind in their decision.

Let's call them what they are: really just another way to prohibit women from making their own decisions about their own bodies.

More like this
How To Fight For Reproductive Rights, Based On How Much Time You Have
By Courtney Young
Michigan’s Governor Is “Going To Fight Like Hell” To Protect Abortion Access
By Andrea Zelinski
23 Abortion Funds In States With Trigger Bans To Donate To
By Emma Carey
The Music Industry Continues To Fail Black Women
By Precious Adesina
Get Even More From Bustle — Sign Up For The Newsletter