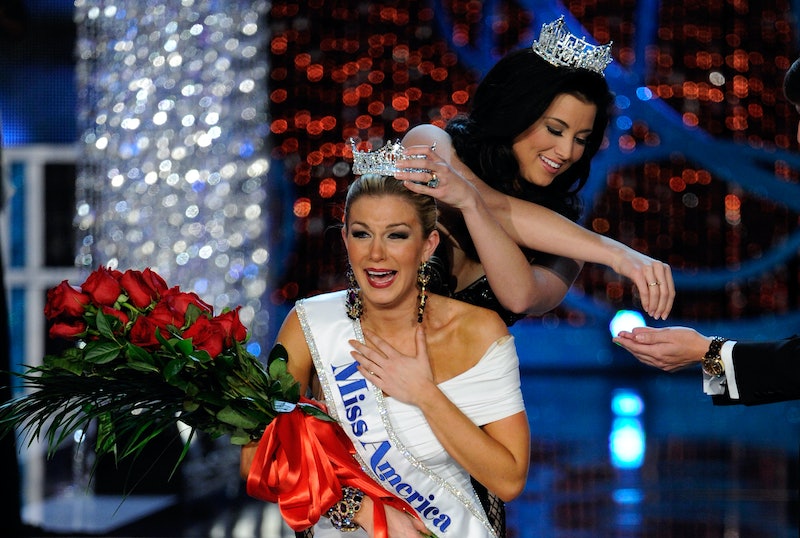 The crown, the sash, and the flowers are obvious perks. The title is an honor. But, c’mon, there’s got to be more to it than that. When the new she is crowned on September 15, what does Miss America win?I know you’re probably thinking of some cold, hard prize cash, but Miss America actually gets money for school, as her winnings come in the form of a scholarship.

After the 2014 competition, winner Nina Davuluri walked away with the crown and $50,000 in scholarship money. The first runner-up received $25,000, and the second runner-up received $20,000. With College Data reporting that the national average tuition is $30,000 for private colleges and $9,000 for in-state public ones, a big, fat Miss America check is a huge help. Scholarships, in incrementally smaller amounts, were also awarded to the other runners-up, finalists, semi-finalists, and contestants, as well as talent and “Lifestyle & Fitness in Swimwear” winners. (Many of them also received additional scholarship money from the contests that qualified them to enter Miss America.) Miss Congeniality got an extra $2k, which shows that it pays to be nice to people.

And, of course, there are the intangible rewards of winning Miss America. The winner gets to embark on a national speaking tour, bringing awareness to a platform she cares about. She gets experience with travel, public speaking, community service, and other things that’ll look good on a resume long after the Vaseline glow has faded from her teeth.

Contestants who are in it for the glamorous riches may have better luck over at the Miss USA pageant. The winner of that pageant, who was crowned in June, gets a scholarship (one year to the New York Film Academy) and a rent-free apartment in New York City for the duration of her reign. She also received a prize package with goodies like Chinese Laundry shoes, Kandice Pelletier swimwear, and Sherri Hill eveningwear, plus makeup, skincare and hair services, a gym membership, a photo shoot with a professional photographer, a PR rep, casting opportunities, and other freebies.

Then again, even Miss USA is blown away financially by a beauty queen who’s never going to take a shot at the title: Honey Boo Boo. While TLC doesn’t pay the contestants on Toddlers and Tiaras, Honey Boo Boo managed to turn her exposure from that show into a livelihood. Mama June, the pint-sized pageant contestant’s mother, told Access Hollywood that her family earns $15,000 to $20,000 per episode of the show — it’s like being a Miss America runner-up every week ­­— without anyone ever having to put on an evening gown if they don’t want to.

So, you know, winning Miss America isn’t everything.

More like this
13 Photos Of Formula 1 Racers Charles Leclerc & Carlos Sainz That Will Drive You Crazy
By Radhika Menon
Ryan Reynolds’ Trailer Of 'Welcome To Wrexham' Is Beyond Emotional
By Sophie McEvoy
Gemma Collins' Net Worth Is Only Going Up
By Catharina Cheung
Lewis Hamilton Turned Down A Role In 'Top Gun: Maverick' For This Surprising Reason
By Darshita Goyal
Get Even More From Bustle — Sign Up For The Newsletter