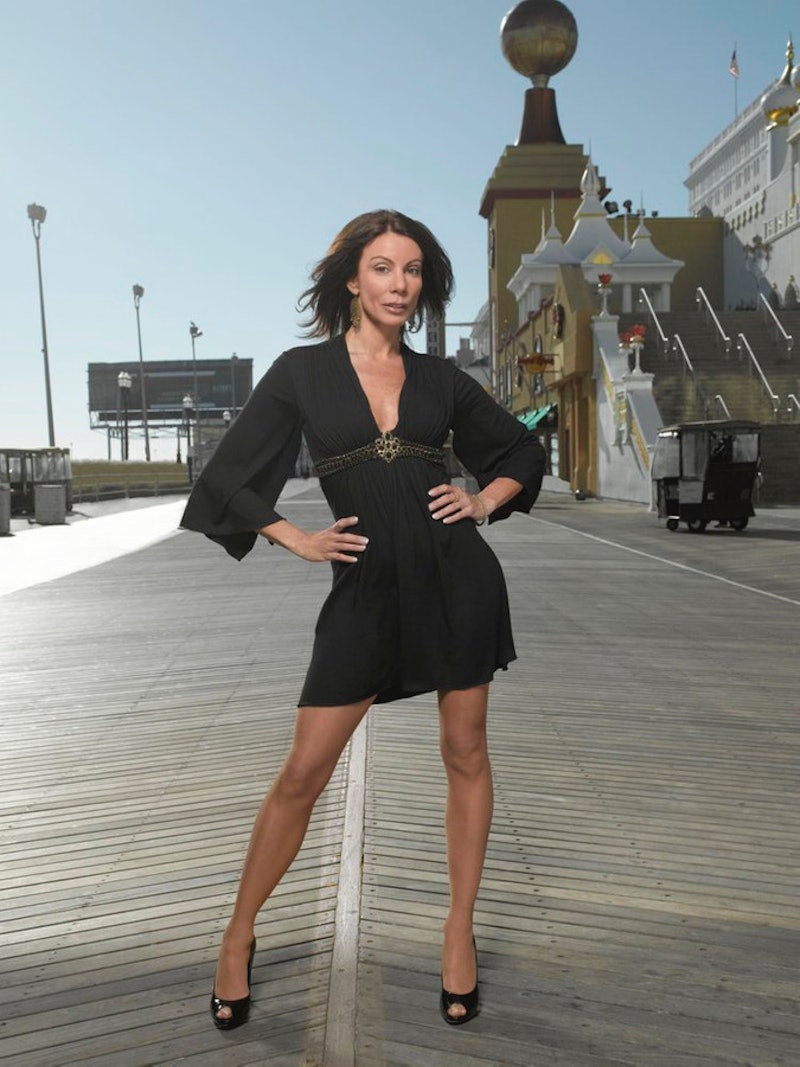 After two insane seasons, a cloud of legal allegations, and a flipped table, Danielle Staub left Real Housewives of New Jersey . Though she's appeared on Andy Cohen's Watch What Happens Live, she has not been in an episode of RHONJ since. But Danielle might be missing all of the excitement of the reality show, because it seems like Staub's been trying desperately to get the attention of Bravo producers by spreading rumors about Dina Manzo's ex-husband to Star.

Bravo recently brought former RHONJ Dina, Jacqueline Laurita, and Kathy Wakile back onto the show, so you can't blame Danielle for trying to get in on the action. In Star, Staub claims that Dina's ex, Tommy Manzo, is gay, and that Dina willingly entered into a fake marriage with him. Danielle also claims that Dina was carrying on an affair with a "mystery man" that eventually broke up the fake marriage. Of course, she doesn't have the mystery man's mystery identity, but she claims that the relationship is still going on and that Dina is just faking her back-in-the-saddle dating storyline to get screen time on RHONJ. Awkwardness as bad as Dina's blind date seems impossible to fake, but if Danielle says it, it must be true, right? Since, you know, the two have always been so close, Dina must have shared extremely personal details with Danielle, despite frequently saying that discussing her divorce is extremely painful and she wants to keep the circumstances private. Cue massive Caroline Manzo eye roll.

If all Danielle wants is attention, congratulations, she's succeeded. But if what she really wants is another shot at a RHONJ spot, she's out of luck, because so far, Andy Cohen isn't biting. Neither is Dina, who hasn't commented on Danielle's accusations… and Dina isn't one to back out of a fight. If she can laugh off these claims, they're probably untrue. The number one thing Danielle needs to bring is drama, and if not even her former nemesis gives it to her, she's failed the Bravo TV test for sure. Girl, it might be time to take your own advice:

However, if it turns out current star Teresa Giudice has to leave the show to serve time for committing fraud alongside her husband, Joe, maybe Bravo will look more favorably upon adding Danielle back to the cast. Without Teresa, they'll need some way to guarantee ratings, and Danielle facing off against Dina could do the trick. They don't need Danielle right now, but she's there, ready and waiting, if they ever change their minds.

More like this
JoJo Fletcher & Jordan Rodgers Got Married In A “Playful & Fun” Wedding
By Grace Wehniainen
Twitter Is Upset About The 'American Idol' Top 3 Results: "Who TF Is Voting?"
By Jake Viswanath
Stormi Just Walked A Red Carpet With Mommy Kylie Jenner & Daddy Travis Scott
By Hugh McIntyre
What’s New On Netflix: A Victoria Justice Rom-Com & The Return Of David Letterman
By Arya Roshanian
Get Even More From Bustle — Sign Up For The Newsletter