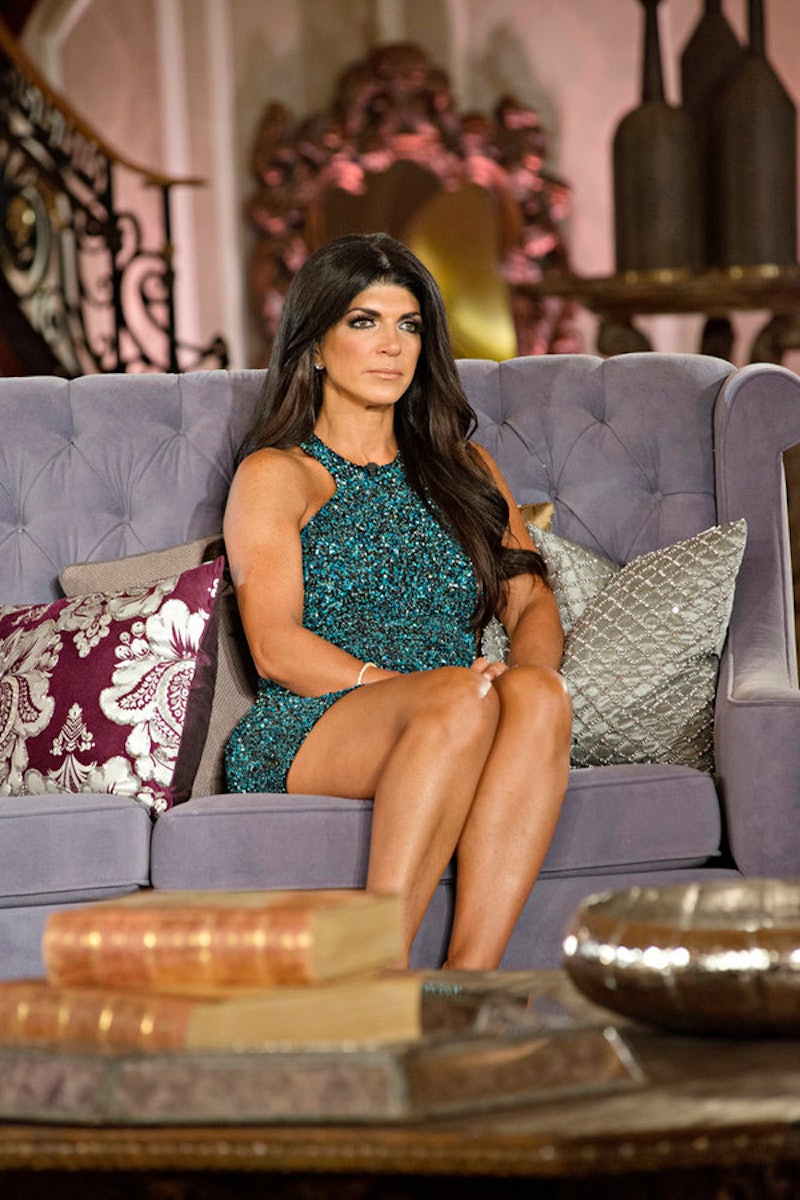 We are getting dangerously close to the sentencing date for Real Housewives of New Jersey 's Teresa and Joe Giudice on Oct. 2. This season of RHONJ has basically been The Teresa and Joe Show with the couple's high-profile legal troubles taking center stage. Last Sunday's episode was one of the most dramatic (or melodramatic) episodes of the season, as it captured the days leading up to Teresa and Joe pleading guilty to several counts of fraud back in March.

As I watch the Giudices deal with the possibility of going to prison every week on RHONJ, I keep thinking about what it will do to their four daughters, which I'm sure is what many of us wonder. As a side note, I'm also very concerned Teresa's fellow Housewife Amber Marchese will not be able to handle it. While this is a case of reality being much bigger and more important than the reality show, I can't help but wonder in the back of my mind what will happen to RHONJ if Teresa is actually sentenced to prison.

Teresa could receive up to 27 months in prison, and Joe faces up to 46 months. That means if Teresa is sentenced to prison, she might not be able to be on RHONJ for at least the next two or three seasons, depending on when she would enter jail and be released. As we all know, that's basically a lifetime in show business. Will RHONJ be able to survive without Teresa? 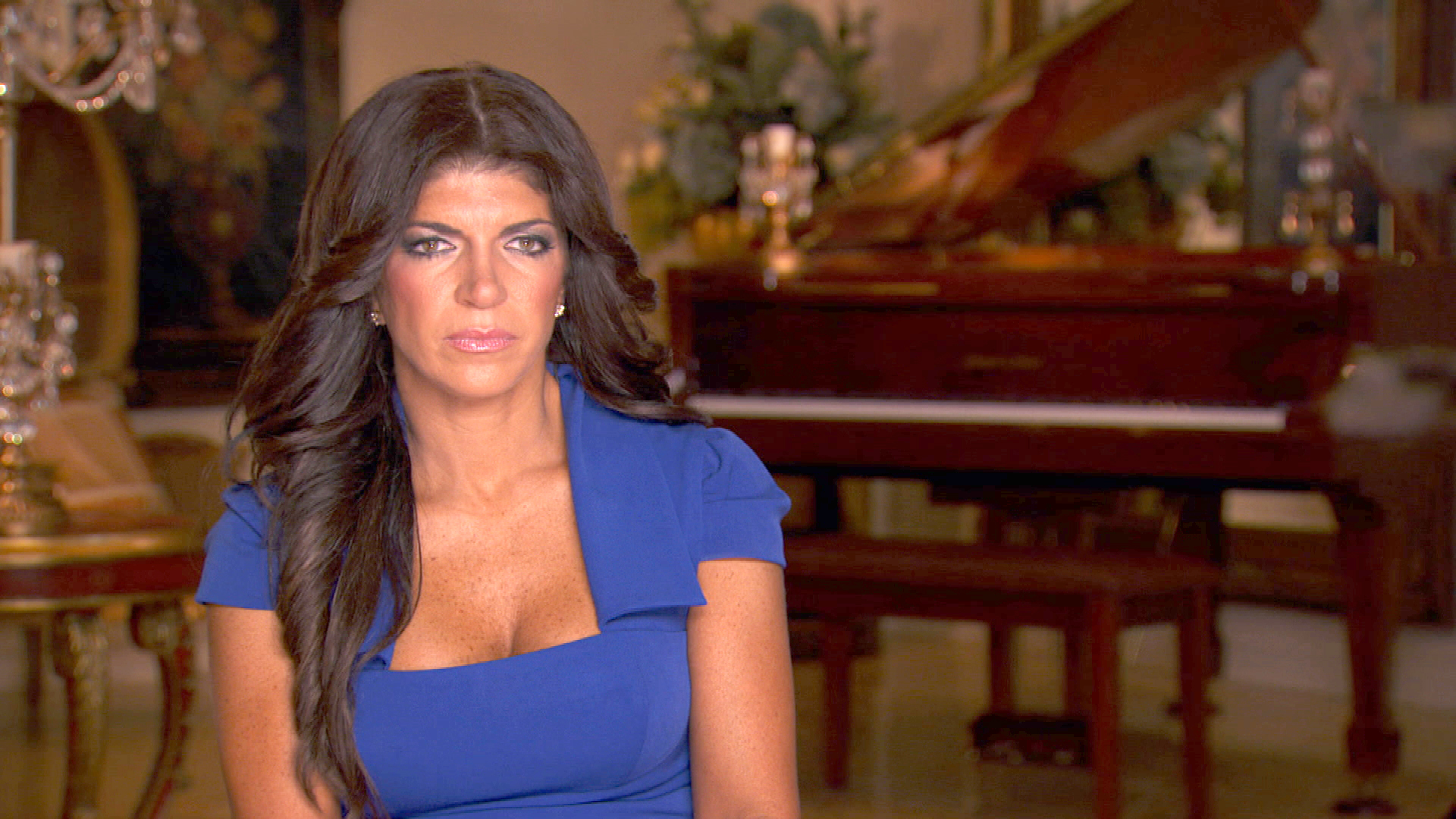 So here's the thing. Speaking completely in terms of entertainment value of Teresa's storyline on RHONJ, her going off to jail totally makes sense. She's always been the hot-headed Housewife who's business dealings and relationship with her husband have often come off as a bit shady. What better way to go out with a bang than to go to prison? It just makes sense that everything we have seen over the past six seasons would lead up to this. Of course, Teresa is a real person and she really does face the possibility of going to jail, so that is sad. But if we all just thought selfishly in terms of the show, it does round out her character quite nicely.

Just because this is a traumatic event for RHONJ, that doesn't mean the whole series will be derailed by it also. The Real Housewives franchise is no stranger to controversy or tragedy. Plenty of cast members have gone through infidelity, divorce, and legal issues, and the shows still keep chugging along. The most serious event to ever befall the Real Housewives was the death of Russell Armstrong, the estranged husband of Real Housewives of Beverly Hills former cast member Taylor, who tragically killed himself prior to the premiere of the show's second season. Although Bravo had to re-edit the season, it still aired, so I doubt Teresa's possible stint in jail will do anything to cause the network to pull the show.

That being said, it's hard to think of RHONJ moving forward without Teresa. She's one of the OGs still on the show today, and she is an icon of the Real Housewives franchise. Her personality and knack for always causing unnecessary and often violent drama each season is a major reason RHONJ grew into such a phenomenon.

Bravo's revamping of the show this year by adding three new cast members was a smart move, considering Teresa may not be able to stay on the show in the future. Not only did the family drama that Caroline Manzo, Jacqueline Laurita, and Kathy Wakile brought to the series just get to be too depressing, but it's almost like Bravo had the foresight that the network would need someone to fill Teresa's shoes if she were unable to return next season.

Out of the Season 6 Housewives, I see Amber as the only one who comes close to achieving the same kind of antics Teresa pulled in her prime. She is extremely emotional and not afraid to pick a fight, even physical ones. However, I think she takes herself too seriously to be able to provide not only the drama, but also the fun that Teresa brings to RHONJ. And with this season's ratings at a series-low, even with Teresa's legal drama, it's definitely in need of a pick-me-up. Unless Bravo finds a Jersey girl as fiery as Teresa, if she goes, the show could go with her.

More like this
Stormi Just Walked A Red Carpet With Mommy Kylie Jenner & Daddy Travis Scott
By Hugh McIntyre
Everything We Know About Chèrie & Jessey’s Abrupt Exit From Bling Empire
By Alyssa Lapid
What’s New On Netflix: A Victoria Justice Rom-Com & The Return Of David Letterman
By Arya Roshanian
Twitter Is Upset About The 'American Idol' Top 3 Results: "Who TF Is Voting?"
By Jake Viswanath
Get Even More From Bustle — Sign Up For The Newsletter